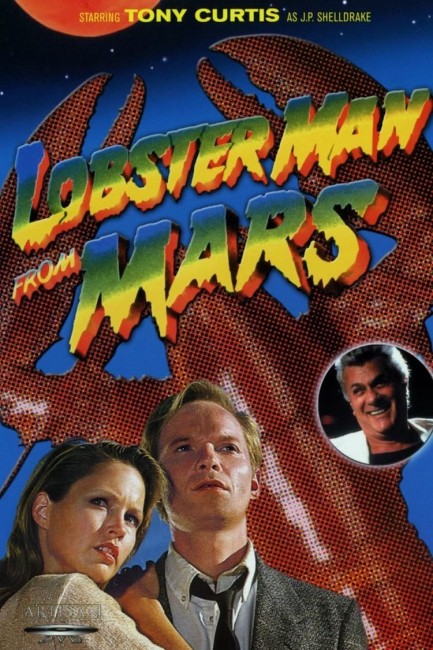 Movie mogul J.P. Shelldrake’s tax dodges have gone wrong and he needs to record a quick four million dollar loss. His accountant suggests he save himself by making a film that is a flop. Shelldrake finds a perfect opportunity when ingenue teenage moviemaker Stevie Horowitz comes to him, trying to sell his film ‘Lobster Man from Mars’. In the film, Mars is running out of air and the King of Mars decides that the only solution is to raid Earth’s air. The King calls upon the only person for the job – the depraved Lobster Man, who agrees to invade Earth so long as it can eat as much unshelled food (ie humans) as it wants. On Earth, John and his girlfriend Mary see the Lobster Man come down and try to alert the authorities as it rampages across the countryside.

Lobster Man from Mars is another entry in the late 1980s/mid 1990s genre of bad 1950s science-fiction film parodies. All the familiar aspects of 1950s science-fiction films – the model rocketships farting clouds of exhaust, the chintzy tinsel alien sets, the lurid lighting schemes, the didactic music, the portentous dialogue delivered in po-face by the cast – have been faithfully recreated.

In what became an established convention for this type of film, the film is littered with numerous in-references to other science-fiction films – the Lobster Man’s sidekick is designed after the title creature of Robot Monster (1953); the bat creatures resemble the ones in It Conquered the World (1956); there’s a Colonel Ankrum (named after Morris Ankrum who was a regular actor in 1950s B science-fiction, usually cast as military types); the site the UFO lands is named TMA-1 – the code name for the crater where the monolith was found in 2001: A Space Odyssey (1968); and some of the dialogue is even quoted straight from The Thing from Another World (1951) – “Gentlemen what we have here is an intellectual carrot,” Patrick MacNee pronounces after examining the bat creature, to which the response is “The mind boggles” – and the ending is a parody of the “smallest thing God put on this Earth” ending of The War of the Worlds (1953).

However, it is all too self-consciously silly, especially the fake seance scenes with Billy Barty and the would-be parody of a gumshoe detective who seems to run through a Mickey Spillane thesaurus of alternate descriptions every time he delivers a line. The sad thing about the film is that though it tries hard, it is too well made to be a real bad film. It is likeable enough so that it never fails as disastrously as say a bad SF film parody as The Revenge of the Teenage Vixens from Outer Space (1986) does, but it is too silly to be inspired. All of which demonstrates that try as one might to do what must be the ultimate postmodern conceit – make a deliberately bad film in a bygone era’s style – nothing that succeeds as well as the films that never tried to be bad in the first place. Subsequent films were far more successful at being 1950s B movie parodies such as Top of the Food Chain (1999) or Larry Blamire’s films like The Lost Skeleton of Cadavra (2001) and Trail of the Screaming Forehead (2007).

Director Stanley Sheff has never been heard from again but the actor who plays the hero of the film, Anthony Hickox, delivered several works as a genre director, including Waxwork (1988), Waxwork II: Lost in Time (1992), Hellraiser III: Hell on Earth (1993) and Warlock: The Armageddon (1993), among others.