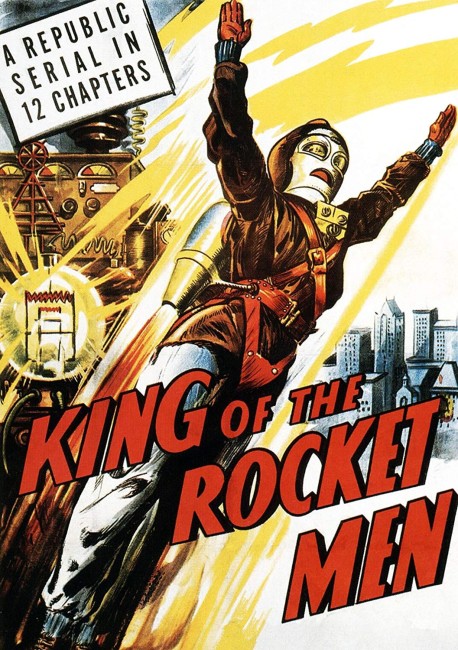 aka Lost Planet of the Airmen

Jeff King is appointed to investigate the murders of a group of scientists at Science Associates. The killer is the mysterious criminal genius known as Dr Vulcan who is attempting to steal scientific discoveries. King determines that Dr Vulcan must be one of the remaining scientists at Science Associates. King has the aid of Professor Millard, one of the scientists, whose murder has been faked but is in fact alive and sequestered in a secret cave hideout. Millard provides King with a jet-propelled rocket pack so that King can fly into action to combat Dr Vulcan and his men.

King of the Rocket Men comes from the classic heyday of the serial. It was made at the time that serials were starting to die out due to a combination of waning interest and the pitifully low budgets caused by Wartime shortages. At twelve chapters, King of the Rocket Men is among one of Republic’s more routine serials. Rocket Man was at least one of the few superheroes original to the serials, combining the then popular serial themes of the masked superhero – Batman (1943), The Phantom, Zorro etc – along with that of the flying ace hero – Ace Drummond (1936), The Masked Marvel (1943).

There is a wonderful naivete to King of the Rocket Men – for instance, Rocket Man’s suit comes with only three controls, including a button that is simply labelled Up or Down and a speed control that is merely labelled Fast. There is great charm to the scenes of Rocket Man’s complete defiance of inertia – with he managing to go from a velocity of something like 80 kph to a delicate landing on the roof of a car in an instant with the greatest of ease.

Unlike some of the better serials, such as the Flash Gordon (1936) and sequels or Buck Rogers (1939), King of the Rocket Men fails to contain any sense of pulp wonder. This is something that is surely typified by its conjuration of such wonderful sounding devices as the Sonitron, the Sonic Decimator, the Ultrasonic Firing Tube, most of which are never seen or are only there for the sole purpose of being McGuffins stolen by the villain.

Indeed, the entire plot seems to consist of little more than schemes by the villains to steal something – be it the abovementioned devices or an endless array of photos of Rocket Man and then the developing fluid needed to print the photos. Most of these sequences have been contrived to get Tristram Coffin into the Rocket Man suit to chase somebody, which appears to have been a mandatory requirement for each chapter.

The cliffhangers are routine – nearly half of them involve either Tristram Coffin, Mae Clarke or both falling from the sky or going off a cliff or a pier in some vehicle or other. One of the better cliffhangers has them fleeing from an oncoming wall of melted lava into a blind cave – but this is considerably let down the following week where the denouement simply allows them to notice another exit right beside them that they did not see previously.

King of the Rocket Men has been notedly produced on the cheap – Chapter 10, for instance, consists entirely of flashbacks with the exception of the brief set-up for the following week’s cliffhanger. The flying scenes are reasonably convincingly conducted. The best effects come at the climax during the destruction of New York by tidal wave (which destroys every building with the exception of the Mayor’s office where all the sidekicks are gathered, which it fails to even ruffle) – unfortunately all of these have been taken wholesale from Deluge (1933). The clean-cut and 40ish Tristram Coffin is not the most likely seeming of serial superheroes. A drab and pudgy Mae Clarke, best known as Elizabeth in the Boris Karloff Frankenstein (1931), is far too old for the role and is miscast as the heroine.

Republic clearly decided that having expended the money to make the Rocket Man costume that they would get the maximum usage out of it and reused it in three subsequent serials – Radar Men from the Moon (1952), Zombies of the Stratosphere (1952) and Commando Cody, Sky Marshal of the Universe (1955). Forty-two years later the Rocket Man concept was revived in Rocketeer (1991) – a film that had a larger budget than just about every serial ever made put together.