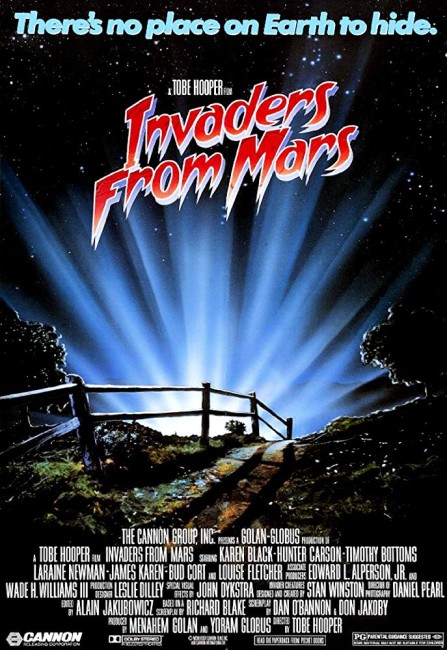 Young David Gardner sees a UFO go down beyond the hill behind his house during the middle of a thunderstorm. In the morning, David’s father goes to investigate. He returns and insists on taking David’s mother behind the hill as well. After they return, both appear changed and behaving in very strange ways. David sees there are now strange marks at the base of their necks. He confesses his story to school nurse Linda Magnusson and the two of them uncover a network of tunnels under the hillside, dug by invading Martians who are taking over the minds of the locals. Together they alert the military as the Martians, with an army of mind-controlled humans, try to sabotage a NASA Mars launch.

Tobe Hooper first came to attention with the shock and brutality classic The Texas Chain Saw Massacre (1974). Hooper’s career since then has been uneven. (See below for Tobe Hooper’s other films). He had his greatest commercial success with the Steven Spielberg-produced ghost story Poltergeist (1982).

Following Poltergeist, Hooper seemed set to carve a niche as a big-budget mainstream director. He was hired by Israeli producers Menahem Golan and Yoram Globus and their Cannon Films production company to first make the alien space vampires film Lifeforce (1985). However, this ended up largely being hated by audiences and laughed off screens (although this author begs consideration otherwise) and was a financial flop that in part contributed to the sinking of Golan-Globus and Cannon a few years later.

With Golan-Globus and Cannon, Hooper then made this, a remake of the 1950s alien invader classic Invaders from Mars (1953). However, Invaders from Mars was an even bigger box-office flop and was savaged by fans of the original and audiences alike. Hooper continued at Cannon with the even more disliked The Texas Chainsaw Massacre 2 (1986). After the flop of all three films, Hooper sank to making a good many bad B-budget films in the 1990s and 00s, while Golan-Globus/Cannon finally went under financially in 1990.

The original Invaders from Mars may have been regarded as more of a classic than it entirely is. However, it does have an effect – one that grows out of William Cameron Menzies’s eerie direction, where he subtly distorted and exaggerated sets in order to create a sense of visual alienation from the young boy’s point-of-view. The remake is much more technically proficient than the B-budget original. The original, for example, merely used stock footage of military manoeuvres for the scenes of the Army moving into action, while zippers were visible on the Martian costumes. Stan Winston’s Martians here are imaginatively created – from the cattle-like drones and the organic machinery (eye-shaped guns, scythe-like tunnelling devices) – while Star Wars (1977) effects supervisor John Dykstra turns out an impressive Close Encounters of the Third Kind (1977)-styled UFO.

On the other hand, the tone of this Invaders from Mars is much more different to the original. While the original was paranoid and physically alienating, the remake’s tone is either comic-grotesque or parodying of 1950s science-fiction cliches. Out altogether has gone the visually distorting sets and even the telling of the story from the child’s eye perspective. The nature of the film has changed from the outrightly paranoid to merely the affectionately weird.

There is some occasionally amusing fun in the early scenes with the possessed humans, which are played for grotesque farce – Timothy Bottoms drinks his coffee in one gulp and manages to inject something bizarre even into the knotting of a tie and his stilted introduction to the police – “This is my son, this is my wife”; Louise Fletcher swallows a frog whole (one is not sure why); and Larraine Newman eats raw hamburger meat piled with salt and straight-facedly serves up bacon strips that have been burnt black. It is just that, while amusing, the comic tone here pales considerably when placed in direct comparison to the intensely paranoid opening scenes in the original.

Like the original, the remake starts to lose its grip during the middle third with too much running around town and at NASA. It does pick up with the military assault on the Martians, which turns into a witty send-up of 1950s cliches. The script offers such stalwart lines as: “Marines have no qualms about killing Martians” or “You’re a lucky boy, David, not everyone gets to meet the Supreme Martian Intelligence.” The scene where the scientist tries to communicate with the drone deflates a certain type of 1950s first contact earnestness.

Screenwriters Dan O’Bannon and Don Jakoby have clear fun posing ideas as to how classical Martians could still exist in a post-Viking lander era. They also succeed in making David more intelligent than the average kid’s movie child characterisation. There are a few in-jokes from the original – a Menzies Elementary High School and a cameo from Jimmy Hunt, who played David in the original, as a police chief, who has a line “I haven’t been here since I was a kid” as he visits the hill where the UFO went down.