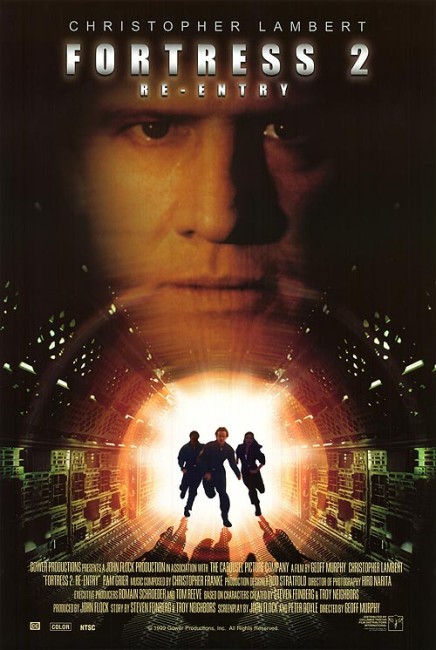 John Brennick is recaptured by the Men-Tel Corporation and this time sentenced to a prison in Earth orbit. As prison governor Peter Teller tries to break him, Brennick makes every effort to escape and return to his wife and son.

Stuart Gordon’s Fortress (1993) was a spectacularly brainless sf/action hybrid. It did however prove to be a surprisingly successful film in international release, whereas in all other regards it should have been relegated to video. This was the sequel, which failed to receive a theatrical release. The sequel comes from the same screenwriters and one of the producers as the first film and brings back star Christopher Lambert. This time Stuart Gordon is absent and direction has been handed over to Geoff Murphy. Murphy is an expat New Zealander who made several quirky films at home – the country’s one cult classic Goodbye Pork Pie (1980), the Maori Wars epic Utu (1983) and the fine sf film The Quiet Earth (1985) – before being swallowed up in the American mainstream with hackwork like Young Guns II (1990), Freejack (1992) and Under Siege 2: Dark Territory (1995).

In the film’s favour, Geoff Murphy, at least when he gets the opportunity, is a better director than the perpetually over-the-top Stuart Gordon. To its advantage, Fortress 2: Re-Entry is not as relentlessly brainless a film as Fortress was and at least rises to a level of routine competence. Alas it is never anything more than that. The action scenes are run of the mill. The special effects are okay and the show at least mounts to a passable action climax as the space station explodes.

On the other hand, the scripters have not endeavoured to approach this film in any more intelligent a way than they did the original. The space station behaves in a very un-space station-like way – it has gravity but does not rotate; the shuttle makes a docking as though it were a normal airplane; crews are sent EVA in spacesuits that lack tethers. There is however one scene that does make for good science-fiction – the scene where Christopher Lambert is placed in The Hole, a bubble exposed on the exterior of the station, which rapidly pitches him between the extremes of burning direct sunlight and icy freezing as it rotates. To its credit, the film features a suspenseful scene where Christopher Lambert goes out of an airlock without a spacesuit and where for once in a film his head with perfect scientific accurately doesn’t explode within five seconds of exposure to a vacuum.

Christopher Lambert is his usual wooden self, while Pam Grier plays over-the-top. British actor Patrick Malahide is badly miscast as the new prison governor where Malahide’s line in caustically dripping superiority and fey taunts makes the role come out as campy.