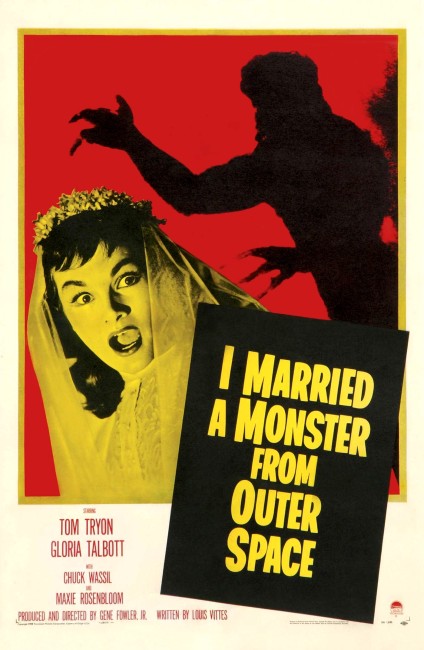 On the eve of his wedding, Bill Farrell is abducted by a glowing alien and returns possessed. Soon after they marry, his wife Marge begins to suspect that something has changed about Bill. One night, she follows him and sees the alien emerge from Bill’s body and enter a saucer in the woods. When she tries to alert authorities, she realises that the aliens have taken over most of the menfolk in the town. The aliens are the survivors from a dying planet whose women have all been rendered sterile by a collapsing sun. They have come to Earth to marry human women in the hope of reviving their race.

I Married a Monster from Outer Space is one of the classic alien invader films from the 1950s. Defying the sensationalistic title it was sold with, it belongs to one of a body of more subtle alien invasion tales – psychological alien invasion stories – that also include It Came from Outer Space (1953), Invaders from Mars (1953) and Invasion of the Body Snatchers (1956), among others. These are films where the invasion takes place in people’s minds and that evince a state of paranoia, more so than they do any physical manifestations of saucers and monsters.

Gene Fowler Jr, who previously directed I Was a Teenage Werewolf (1957), is not quite in the same class as Jack Arnold, William Cameron Menzies and Donald Siegel, the respective directors of the aforementioned classics. Fowler is much more pedestrian and workmanlike – I Married a Monster from Outer Space is an alien invader film rendered on a B-budget and with the linear, prosaic style of directors associated with the B-budget studios of the 1940s. There is nothing here of the eerie film noir tension and nightmare-like imagery that Donald Siegel gave Invasion of the Body Snatchers or the physically alienating exaggerated perspectives of William Cameron Menzies’ Invaders from Mars.

That said, there are definitely times when Gene Fowler transcends the material with a fervid pulp imagination. The initial sight of the aliens is eerie – a body appearing on the road in front of Tom Tryon’s car, it having vanished when he gets out, followed by the appearance of a glowing claw that touches him on the shoulder as he is enveloped in a fog, and then a sinister shape watching him along the lakeside as he departs.

The film’s one directorially sublime moment is that scene on the night of his honeymoon where Tom Tryon turns on the balcony and a flash of lightning reveals alien features beneath his face. There is also a fine scene in the middle of the film where Gloria Talbott follows Tom Tryon into the woods, seeing a glowing alien emerge from his body and entering the spaceship, leaving his body a dead husk (effectively demonstrated by a bug crawling across it). Here and in Gloria Talbott’s flight, Gene Fowler suggests somewhat of what Donald Siegel did in Invasion of the Body Snatchers of a film that seems to make much more sense as an irrational nightmare made life than as straight narrative.

Outside of these moments of flair, I Married a Monster from Outer Space works on a crude level. It is fairly much only intended as the incarnation of any of about a million archetypal pulp science-fiction magazine covers with a green-skinned tentacular alien carrying off a scantily-clad heroine. It is an interesting film to read on the level of subtext though. It was clearly written by someone who was either a bachelor whose greatest fear in life was of getting married, or someone who had a fairly embittered view of marriage – it is after all about a group of confirmed bachelors who are taken over by an alien force that turns them into docile and dull married men, even makes them sober up. You could easily imagine the film being written by someone who had a pathological fear of commitment.

Unlike most treatments of sex and gender roles in 1950s science-fiction, I Married a Monster from Outer Space is divided on the subject – in the second half the attitude becomes markedly reversed to what it is in the first and it ultimately becomes a film about asserting traditional stereotypes. For all the earlier fear the film seems to exhibit about marriage, I Married a Monster from Outer Space is eventually a film that comes out with all red-blooded testosterone blazing in favour of fighting for commitment and the life of docile, sober anonymity. The rather funny climax has the doctors go into the maternity ward and rallying all the red-blooded men to stand up and save the women and drive the sterile alien impostors out. Even the aliens get to realise the nature of love throughout. Women, alas, are meant to be there only as wives – early in the piece one of the unwed women has a soliloquy: “I had just about given up hope [of getting engaged]. I was reading books about Joan of Arc, Florence Nightingale, Madame du Barry – you know, career women” – which clearly indicates that the film holds the view that an unwed woman is one who lacks purpose.

There seem few films that reveal more aptly than I Married a Monster from Outer Space the fearful beliefs that ran through 1950s science-fiction of there being a force out there that lacked and could steal emotion away from ordinary people. Paradoxically, the film also reveals that the ordinary life that was being defended as the status quo was one equally threatening in its dictatorial demand for conformity – a place where men and women must both conform to ridiculously idealised notions of middle-class marriage, where the man is the provider and the woman must stay at home and make house.

I Married a Monster from Outer Space was later remade as a poor tv movie I Married a Monster (1998). Star Thomas Tryon later became a horror novelist, turning out a number of Gothic novels, the most famous of which was filmed as The Other (1972). The irony about such an ardent and red-bloodedly heterosexual film as this is that Thomas Tryon was gay in real life.