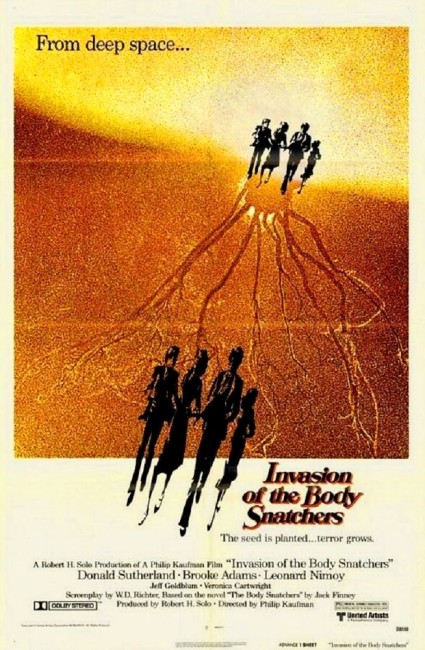 Spores from outer space fall in San Francisco where they hatch flowers that are then taken home by people. City health department chemist Elizabeth Driscoll confides in her colleague Matthew Bennell that her boyfriend seems to have changed. Bennell soon encounters similar reports, including two friends who find a blank, unformed body in their bathhouse, which then takes on features as they sleep. Matthew’s friend, pop psychologist David Kibner, insists that is due to a modern disregard for relationships. The mystery deepens with Bennell eventually finding that they are surrounded by alien pods that are capable of perfectly duplicating human beings, all except for their emotions.

Most remakes are by definition pointless – if the original did it well enough then surely there is no point in trying to do it all over again, and if it didn’t then what is the point of remaking a film that nobody liked. Most remakes seem to find their justification in trying to retell the original in terms that today’s audiences can understand – by using familiar stars, better production values and modern messages/references – but this is only cultural philistinism. The only purpose a remake can serve artistically is to redefine and re-explore what the subtext of the original was about.

This remake of Invasion of the Body Snatchers (1956) is one of those successes. The original is, at least in this author’s opinion probably the finest 1950s science-fiction film, and is held in similar esteem by many others too – which is quite a legacy to stand against. However, this is one example where a remake does manage to stand up as almost as good as its predecessor – had it not stood in the shadow of its progenitor, Invasion of the Body Snatchers 1978 would have probably been hailed as a near masterpiece, one suspects.

Director Philip Kaufman and screenwriter W.D. Richter eschew any straight remake of the original film or of Jack Finney’s book and instead go back to understanding what lay beneath the originals and translating it into contemporary terms. In the 1950s, America’s self-image was as a homely small town environment – the worst thing that could happen was for that sense of cosy next door familiarity to be turned into something alien. The original Invasion of the Body Snatchers is a film about society’s fear of the things that lie outside its rigid conservative confines. By the 1970s, that society had radically changed. The self-image had become urbanized and the breakdown of traditional values – ironically the very thing that the original Invasion of the Body Snatchers had so feared – had left many people less certain.

Invasion of the Body Snatchers 1978 instead becomes a metaphor of urban alienation. The scary images here come not from the comfortably familiar turned cold and unrecognizable, rather from people having become so absorbed in themselves that they do not notice the alien and emotionless taking over. When people say “My husband isn’t himself” in this film, it means something different to the original – and here the film wittily jumps away to Leonard Nimoy’s psychiatrist calmly explaining that it is only a wish fulfilment that comes from society’s regarding relationships as disposable. Indeed, the remake almost takes a sense of urban alienation as being the norm – at one point, Brooke Adams states: “I keep seeing these people. All recognising each other. Something was passing between them all, some secret. It’s a conspiracy.” Urban alienation has become such that the actual meeting and contact of people is seen as something unsettling, which is surely a complete reversal of the message in the 1950s.

The original film, shot in black-and-white, had that cool, documentary-like clinicism so familiar to 1950s science-fiction films. Director Donald Siegel allowed it to become overtaken by a film noir intensity that subtly built to extreme paranoia. Philip Kaufman takes a quite different approach – he keeps his camera moving, his frame is always busy with incident. Amidst this, Kaufman builds the eerie up out of indirect detail (something that Donald Siegel never did) – shots that sit looking down hallways at uncomfortably odd distances; people watching in the corner of the frame or people whose eyes meet. In one scene, Art Hindle, who overnight suddenly becomes be-suited, clean-pressed and emotionless, sweeps up and puts out some grey fluff in one of the everpresent garbage trucks, a scene that becomes more chilling when one later realises that it is the remains of his human self that he is sweeping up. When Philip Kaufman comes to the outright paranoia, he, like Siegel, allows a noir-esque shadow lighting to subtly pervade the film.

Away from the 1950s necessity for enforced happy endings, Philip Kaufman is also able to make his Invasion of the Body Snatchers a far less compromising film than the original. Kaufman manages to both recreate sequences from the original and add some highly effective sequences of his own. One scene that works far better here than it did in the original is the scene with the body at Bellicec’s place – with Donald Sutherland and Jeff Goldblum slowly realizing that the unformed body on the slab is identical to Goldblum; it developing a nosebleed just like Goldblum does; and the shock jump that occurs when it opens it eyes as Veronica Cartwright is looking down and then seconds later shuts them with an audible snap as Goldblum wakes up. The spookiest scene in the film is the one where Donald Sutherland dozes in his garden and the four pod duplicates of he and the others start to form, the pods oozing out naked bodies with a crunching, popping sounds, forming into embryonic creatures that have soil instead of crotches.

W.D. Richter delivers a script filled with some wonderfully disquiet dialogue. Just the way Brooke Adams’s boss delivers the line, “I don’t understand why you’ve become so emotional about a little flower,” alone suggests that he is a pod person. Some of the lines during the scene when Leonard Nimoy confronts Donald Sutherland and Brooke Adams in the office are superbly chilling:

Adams: “I hate you.”
Nimoy: “We don’t hate you – there’s no need for hate now. Or love.”
Adams: “There are people who will fight you. Stop you.”
Nimoy: “In an hour you won’t want them to.” (Before leaving, he consoles Donald Sutherland): “Don’t be trapped by old concepts, Matthew, you’re evolving into a new lifeform.”

W.D. Richter’s script also proves surprisingly playful – particularly when seen in historic hindsight – when it comes to all that was kooky and strange about the 1970s. W.D. Richter has considerable fun, particularly with the characters of the Bellicecs, who seem a bottled comic opera of all that was 1970s fad nuttiness – plant music, mud baths, the angst of the serious poet. It is knowledgeable parody too – not many people would get the throwaway gag where a customer at the mud baths sits reading an Immanuel Vellikovsky book. Veronica Cartwright has wonderfully witty throwaway lines about Erich Von Daniken: “This is just like it happened thousands of years ago when those spaceships landed and those spacemen mated with monkeys and produced the human race.” The opening also trades on the discredited cosmic drift theory in regard to the origin of life.

Leonard Nimoy’s psychiatrist character (no longer called Kaufman as he was in the original!!) has been wittily updated into a pop psychologist. The way that Nimoy persuades people they could be imagining everything, using the simplistic feelgood cliches of pop psychology, and is later revealed to be a pod (how long he has been one we are never told) creates a considerable sense of dis-ease behind the humour.

Philip Kaufman throws in a number of in-jokes of his own (far better and well before genre in-quoting became a gimmick), including a cameo from Kevin McCarthy still running through the traffic wild-eyed, yelling “They’re coming to get you”, plus a cameo from the original director Don Siegel as a taxi driver. Robert Duvall also makes an uncredited blink-and-you-miss-him cameo at the very beginning as a priest on a swing in a children’s playground.

There were further remakes, the also worthwhile Body Snatchers (1993) from director Abel Ferrara and the highly disappointing The Invasion (2007).

Philip Kaufman has made a number of fine films, including the Inuit drama The White Dawn (1976), the gang film The Wanderers (1979), the Michael Crichton adaptation Rising Sun (1993) and works of literay erotica such as The Unbearable Lightness of Being (1987) and the superbly underrated Henry and June (1990). Kaufman has had a number of other associations with the genre. One of his earliest films was the comic-book hero spoof Fearless Frank (1967). He was also originally slated to direct Star Trek – The Motion Picture (1979), wrote the story for Raiders of the Lost Ark (1981), directed and adapted Tom Wolfe’s novel of the early days of the space programme The Right Stuff (1983), made a film out of the life of the Marquis de Sade with Quills (2000) and directed the disappointing serial killer thriller Twisted (2004).

Screenwriter W.D. Richter next wrote the script for the Frank Langella Dracula (1979), John Carpenter’s Big Trouble in Little China (1986), the Stephen King adaptation Needful Things (1993) and Stealth (2005) about an artificially intelligent fighter plane, as well as directing the cultish The Adventures of Buckaroo Banzai: Across the Eighth Dimension (1984) and the fine cryogenic sleeper film Late for Dinner (1991).