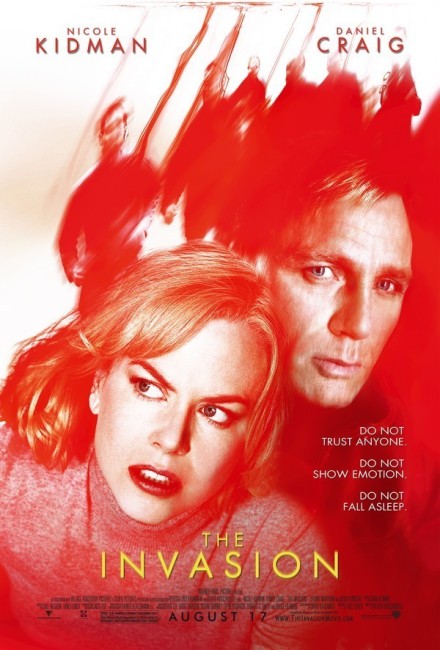 The space shuttle Patriot crashes down to Earth and afterwards strange biological samples are found among the debris. One of the investigators at the crash site is government health official Tucker Kaufman. Kaufman’s estranged ex-wife Carol Bennell works as a psychiatrist in Washington D.C. She is puzzled by patients who are suddenly complaining that their family members are no longer the same and finds a spate of internet postings of people saying the same things. All around her, Carol starts to see people, including Tucker, behaving coldly and strangely. She and her boyfriend Ben Driscoll discover that people are being infected by a biological organism that takes over their body while they sleep, turning them emotionless and alien. They realise that Carol’s son Oliver may have a natural immunity to the infection. She struggles to get Oliver back from Tucker but in doing so Tucker succeeds in infecting her. Hunted by the body snatchers, Carol struggles to get to safety at a military base with Oliver but must stay awake to prevent herself being taken over.

The Invasion was the fourth film adaptation of Jack Finney’s classic novel The Body Snatchers (1954). The original version of the story Invasion of the Body Snatchers (1956) is one of the greatest science-fiction films ever made. It defined the alien body snatchers theme with classic and unforgettable regard and must be considered one of the most paranoid films ever made. It has a nightmare atmosphere that is impossible to shake afterwards. Philip Kaufman remade this as the also excellent Invasion of the Body Snatchers (1978), which relocated the story to 1970s San Francisco and made it into an allegory of urban alienation amid the Me Generation. The story was further remade as Abel Ferrara’s underappreciated Body Snatchers (1993), which relocated the story onto a military base and turned it into an allegory for the darkening of the American dream.

The Invasion comes from Oliver Hirschbiegel, a German director who previously made The Experiment (2001), a fictionalisation of the famous 1971 Stanford experiment where a psychologist placed volunteers into an artificial jail environment, and especially the enormously acclaimed Downfall (2004) about the last days of Adolf Hitler. On the basis of Downfall, Oliver Hirschbiegel was brought to the US to make his English-language debut with The Invasion. Alas, this did not go well for Hirschbiegel. Producer Joel Silver was not happy with the finished print that Hirschbiegel delivered in 2005 and so went back to the drawing board, hiring The Wachowski Brothers of The Matrix (1999) fame to retune the script. In 2006, at the cost of $17 million, Wachowski associate James McTeigue, the director of V for Vendetta (2006), Ninja Assassin (2009) and The Raven (2012), went and substantially reshot a number of scenes, including beefing up the latter half of the film to include more action. Most saw this as being a disaster in the offing and The Invasion accrued almost universally negative reviews when it premiered in August 2007.

Of all the adaptations of Invasion of the Body Snatchers, The Invasion offers the most radical changes to the basic elements so far. It is not just having the original hero, smalltown GP Miles Bennell, recast with a woman, Nicole Kidman, or becoming a Washington D.C. psychiatrist (a change that works surprisingly well). There are much more fundamental conceptual changes to the story – most notably the elimination of the pods, which are one of the crucial elements of Invasion of the Body Snatchers (and something that has provided the other two remakes great opportunity for much in the way of icky transformation effects). Now all that we have is a biological infection passed from person to person that activates when REM sleep kicks in. While more biologically convincing than pods, this is a far less exciting concept (although does lead to an amusingly ingenious scheme where the body snatchers distribute the infection by setting up a fake countrywide inoculation scheme).

Though it makes a number of changes to the story, The Invasion also pays homage to previous versions. There is a cameo from Veronica Cartwright, who played the role of Nancy Belicec in the 1978 version, while Nicole Kidman gets to replay Kevin McCarthy’s famous scene running down the highway calling “help me” and being ignored by the cars coming towards her.

One supposes that The Invasion is competently made and watchable enough as long as anybody has not seen any of the previous versions of Invasion of the Body Snatchers. Certainly, when you see it up against the other versions, The Invasion quickly becomes the weakest version of the story to date. What crucially seems missing over the other versions is a sense of nightmare creeping up around the protagonist. Most of the scenes here are handled traditionally but fail to evoke anything in terms of paranoiac mood.

Oliver Hirschbiegel stages but miscues many of the classic scenes from the previous versions. There was the great scene in both the 1956 and 1978 versions where Bennell and Becky are called to the Belicecs’ house and see an unformed body on a table and sit watching through the night as it forms into something human. That has been replaced by a scene here where they are called to the Belicecs and discover Roger Rees in a cocoon, which then scuttles downstairs as he is woken. The scene fails to work and crucially lacks any of the creepiness that the scene had in the other versions. There was also the classic scene in the 1956 version where Kevin McCarthy returns and hugs Dana Wynter, only to realise in her lack of response that she has been replaced, which has been replayed with a scene where Nicole Kidman realises that Daniel Craig has been taken over, which lacks anything nightmarish to it in the replaying.

In place of the amazingly paranoid climaxes of all three other versions, The Invasion substitutes car chases and Nicole Kidman’s struggle to save son Jackson Bond. These scenes are disappointingly traditional. And oddly they buy into the very false ending that the 1956 version had forced on it by the studio where the psychiatrist finishes listening to Kevin McCarthy’s story and decides to call in the FBI. The Invasion is the only of the versions of Invasion of the Body Snatchers to arrive at an upbeat ending, holding out for the optimistic belief that the military will become the cavalry that will turn up to save the day and provide a cure.

Certainly the latter half of the film offers up an interesting twist on the original – where the heroine becomes infected with the body snatcher virus and has to make herself stay awake, lest she end up being converted. However, this is ruined by an absurd scene where son Jackson Bond must try and wake Nicole Kidman up with an injection of adrenalin to her heart. One must also say that Nicole Kidman looks in a remarkably good state for someone who has stayed awake for several days – in normal medical circumstances, this usually results in severe health problems, including waking hallucinations, impaired mental faculty and an inability to control one’s bodily functions.

All the other versions of Invasion of the Body Snatchers have taken on an extra dimension of political allegory. The 1956 original was seen as an allegory for the McCarthyist witch hunts and/or fear of Communist infiltration. The other versions adapted the allegory to their times in interesting ways. The Invasion is no different. The news broadcasts in the background are constantly referring to the Iraq War, North Korea and the humanitarian crisis in Darfur. Once the body snatchers take over, we get an amusing montage of news clips where it is seen that there is now peace in the Middle East and Darfur, North Korea has given up its nuclear ambitions, George W. Bush has signed up for universal free healthcare, Bush and his notoriously outspoken critic Venezuela’s President Hugo Chavez have signed a treaty for free oil, there are free AIDS vaccines distributed in Africa, and the US announces that it is withdrawing from Iraq and all the Iraqi ethnic factions have settled their differences. While amusing, this does seem a little contrived (and something that is surely going to date The Invasion very quickly).

The other thing you notice about The Invasion‘s attempt to drum up a dimension of political allegory is that you come out of the film unsure what its political leanings actually are. While the film is conducting a swipe at contemporary news headlines, what is noticeable is that the idea of world peace is something that is won by the body snatchers, which are otherwise depicted throughout in a negative light. You wonder if the film is saying that this kind of utopian vision of world peace is an evil that robs us of our humanity, that the world is better off being a war and ethnic-tension riddled mess. It is hard not to see the film as something that has come from the pen of a hard-line US right winger.

On the other hand, the film does seem to be making a statement about the threat of mass conformity and the institution of a police state, drawing parallels with the loss of civil liberties in modern America. (One should not forget that a number of these scenes were made under the aegis of James McTeigue and the Wachowskis who made the highly politicised and anti-Bush V for Vendetta). Amid all the recuts, you are never sure what the allegory is being made to say. Mindedly, the 1956 Invasion of the Body Snatchers had a looseness to its metaphor that meant that it could be interpreted as being an allegory both for and against the prevailing political ideology of the day. Still, while all the previous versions of Invasion of the Body Snatchers hold the view that the body snatchers represent a loss of individuality, The Invasion is the only one that seems to hold the conservative view that we can be saved by placing trust in nationhood and that the US defence forces will always be there to save the world.

Oliver Hischbiegel subsequently went onto make Five Minutes in Heaven (2009) and the poorly received Diana (2013), both based on true-life stories.