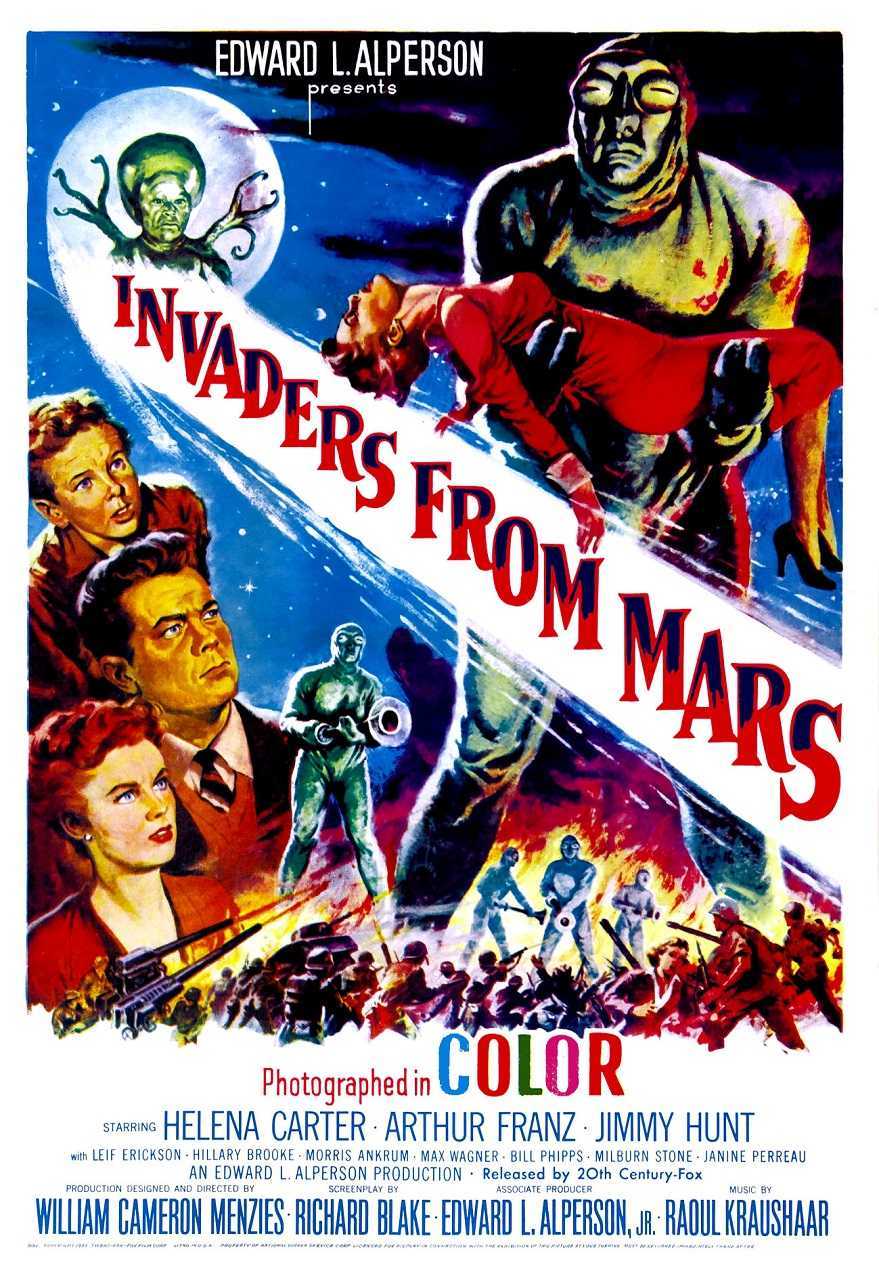 Young David MacLean sees strange lights going down beyond the hill outside the house. David’s father goes to investigate but returns cold and strangely changed. He takes David’s mother over the hill and she too returns similarly changed, along with others in the town throughout the rest of the day. David notes that all of them return with marks at the back of their necks. He tries to tell the police but they too have been changed and he is locked up. Finally, a health inspector and an astronomer believe David’s story. They call in the army to take on the Martian invaders who have burrowed beneath the hill.

Invaders from Mars is a classic of 1950s alien invader cinema. It belongs to a particular mini-genre of alien invader films that dealt with alien infiltration and duplication. They are films that took the outward aspects of alien invader films into interestingly paranoid psychological space. Others among this mini-genre include It Came from Outer Space (1953), Invasion of the Body Snatchers (1956), Quatermass 2/The Enemy from Space (1957), The Brain Eaters (1958) and I Married a Monster from Outer Space (1958).

Invaders from Mars was directed by William Cameron Menzies. Menzies was a former production designer and art director who started in the silent era and had worked on classic films like The Thief of Bagdad (1924), The Son of the Sheik (1926) and Gone with the Wind (1939) and then had begun directing with Always Goodbye (1931). (See bottom of page for William Cameron Menzies’ other genre films).

William Cameron Menzies also designed most of the films he directed and it is this that makes Invaders from Mars such a fascinating entry in the alien body snatchers cycle. Menzies chooses to tell the film from a child’s perspective. Invaders from Mars is a film about the alienation of the familiar as the other entries in the body snatchers cycle were but the child’s eye perspective grants this a good deal more impact – it is about the alienation of parental figures, about a small child caught powerless in the force of suddenly sinister authority. The sense of alienation is suggested through sudden closeups on the faces of David’s parents, faces that are abruptly shown to be blank, sweaty or sinisterly smiling.

Moreover, Menzies uses sets to generate an intense sense of spatial dis-ease – when David enters the police station, the station foyer becomes sinisterly alienating with its oversized doors and forebodingly heightened front desk set across a white plain. Invaders from Mars is made on the cheap but often with remarkably effective economy. Instead of any crashed spaceship, Menzies creates merely a single set of a bare hillock, a few trees and some sand dunes. Nothing is seen of the Martians for over half the film, they only exist as something shifting beneath the sand.

The first half of the film generates some excellent mood but the latter half about the military hunting the Martians down in the tunnels becomes less interesting. Like Invasion of Body Snatchers with its tacked-on ending where the psychiatrist appeals to the FBI, the film is unwilling to countenance the belief that the forces of authority and government ultimately would not save humanity in the eventuality of an alien invasion. David’s incredulous story is taken seriously by the military with absurd ease.

The middle of the film’s 78-minute running time is padded with a reasonable amount of stock footage of astronomical observatories and in particular of military maneuvers. When we eventually do get down into the tunnels, there is some fun in watching the military taking on the invaders. The tall bug-eyed Martian soldiers look unworldly, although the effect is spoiled somewhat by the baggy costumes and clearly visible zippers, as are the shots of the Martian leader’s disembodied head by the necessity to have to cut to closeup every time it has to register expression.

Invaders from Mars was intended to be shot in 3D, although this was abandoned for budgetary reasons. Nevertheless, many of the shots have clearly been intended for the 3D medium, which gives the impression that the choice to abandon filming this way was made after the film began shooting. William Cameron Menzies was one of the few directors of the original 3D cycle to use the format to create atmosphere rather than merely pop novelty objects into audiences’ laps. He creates a number of eerie perspective shots – the way a line of warehouses fades into viewpoint, or a laboratory where the test-tubes in a lab are all lined up the foreground of the shot.

Some prints of Invaders from Mars have a different ending. The American one features a twist ending wherein David wakes up to find what transpired has all been a dream, only to look out the window and see another UFO coming down but the European one ends with the vanquishing of the Martians by the soldiers and no dream. Depending on which version of the film you see in circulation – the original cut version or Wade Williams’ 1976 restoration – this may or may not have been restored.

The film was remade as Tobe Hooper’s Invaders from Mars (1986).

As director, William Cameron Menzies made a number of classic genre films including:- the mystical superhero film Chandu the Magician (1932), adapted from the popular radio serial; Things to Come (1936), the H.G. Wells written Utopian work of future history; the Communist infiltration thriller The Whip Hand (1951); and the bizarre haunted castle film The Maze (1953).