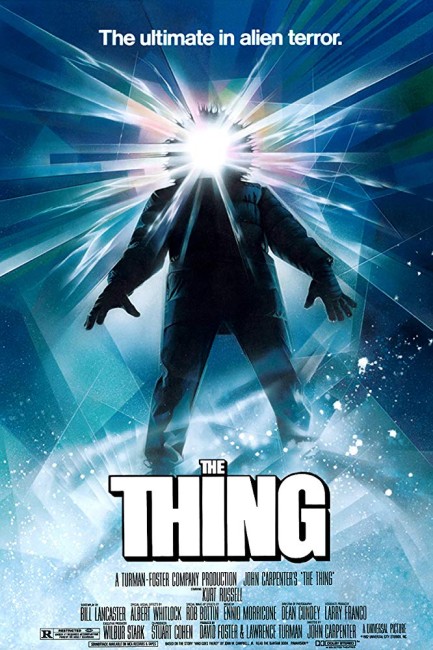 The personnel at an American base in Antarctica are interrupted by the appearance of helicopter from a nearby Norwegian base as the crew are attempt to shoot a husky. The Norwegians then accidentally blow themselves up with a dropped hand grenade. Afterwards, the Americans accept the dog into their camp. What they do not realize is that the husky is a shape-shifting alien lifeform that the Norwegians have unearthed from the ice. It quickly starts to duplicate and replace the men in the base. Soon it becomes a desperate game of survival where no one is sure any longer who is human and who is alien.

John Carpenter emerged in the 1970s with Dark Star (1974), which wittily deconstructed Star Trek (1966-9) – a film he made while still a student at the University of Southern California film school. Carpenter then made the acclaimed gang siege film Assault on Precinct 13 (1976), which was not seen widely, and then hit the big time with the amazingly successful Halloween (1978). Halloween was a film where Carpenter pulled out all the stops directorially and scared the wits out of his audience. It was one of the most successful independent films ever made at the time and the key influence on the slasher cycle of the 1980s. After Halloween, Carpenter made the ghost story The Fog (1980) and went onto the cult success of Escape from New York (1981). Next up for John Carpenter was The Thing, which one is prepared to argue as being Carpenter’s masterpiece. While Carpenter’s films since have many great moments and are generally enjoyable in various ways, none seem to have the outright imagination that The Thing is.

The Thing has developed a sizable cult subsequent to its release. The surprise about it is that the film was not a success when it came out. The Thing‘s problem was its’ timing – it came out three weeks after Spielberg’s E.T– The Extra-Terrestrial (1982). E.T. and its warm-fuzzy view of intergalactic relations was well and truly on its’ way to becoming the then No. 1 box-office film of all-time and The Thing ended up being forgotten in the excitement. Moreover, The Thing received a surprising number of hostile mainstream reviews that dismissed it as no more than an effects and gore showcase.

The Thing tapped into the burgeoning fad for remakes of 1950s science-fiction films that began in the 1980s. It was a remake of The Thing from Another World (1951), the first alien invader film of the classic fear-fraught era of 1950s science-fiction. Although, The Thing 1982 is less a remake of The Thing 1951 than it goes back to The Thing 1951‘s source work, the novella Who Goes There? (1938) by John W. Campbell Jr. John W. Campbell Jr is an interesting figure in science-fiction – he was the editor of Astounding/Analog magazine from 1939 to 1971 and was responsible for bringing out many key genre writers during the 1930s and 40s and maturing science-fiction that period. (Campbell was apparently inspired to write the story when as a boy he met his mother’s twin for the first time, not aware she was a different person, and felt an intense sense of dealing with someone the same but alien). The Thing 1951 largely abandoned John W. Campbell’s source material, keeping only the basics of an Antarctic base, a group of trapped men and a hostile alien menace, and threw out altogether the notion of a shape-changing alien that could take the likeness of any lifeform.

John Carpenter keeps a couple of quotes of the 1951 film – the scene on the video at the Norwegian base with the men holding hands in a circle to demonstrate the size of the UFO that is directly borrowed from the original. Otherwise, Carpenter and screenwriter Bill Lancaster (the son of Burt Lancaster) return to the novella and follow it exceedingly closely – the only major differences are the addition of the Norwegians chasing the husky at the start and a more downbeat ending (where Campbell had the men defeating the alien, Carpenter ends on a decided note of ambiguity). One may even suggest the heretical notion that Bill Lancaster expands the story out and makes it work even better than it does on the page – John W. Campbell’s story mostly centres around men of action trying to logically deduce ways to detect the alien and who it could be, while Carpenter gets inside their fear and paranoia and depicts the utter alienness of The Thing.

The Thing was the epitome of the early 1980s fad for air bladder makeup effects transformations. The genre had begun with the twin hits of The Howling (1981) and An American Werewolf in London (1981), which had shown werewolf transformations taking place with fur, snouts and teeth sprouting out of a man’s body in enormous detail. John Carpenter recruited Rob Bottin, the 21 year-old whiz kid who had conducted the werewolf transformations for The Howling, to create the effects here.

The Thing could well be the ultimate makeup experience ever placed on film. It is like the wildest imaginings of artists like Hieronymous Bosch and H.R. Giger having been given a startling life. A dog’s body splits open to reveal a writhing tentacular mass whipping out to drag a team of huskies into its maw; the head of a possessed man splits in half to force a screaming man’s body down into its gullet; a Thing-possessed man forces his fingers under the skin of another man’s face and we see them wriggling around inside. In the most startling set-piece, one creature gets its head blown off and then wraps a three-foot tongue around the legs of a chair to drag itself to cover, before sprouting spider legs to walk out the room upside down.

The Thing is an odd case of a film defying what is generally considered poor filmmaking sense – all special effects, minimalist characterisation – and still emerging as a great film despite. In some ways, The Thing is not a great deal different from Friday the 13th (1980) and sequels and imitators – a bunch of faceless victims and a series of novelty gore dispatches. Despite the relative anonymity of the characters – who it should be pointed out had little more depth and a greater numeric complement in the John W. Campbell story – John Carpenter generates an intense sense of paranoia and dread. This is one of the few modern films that achieves something akin to the edgy paranoia about what is human and what isn’t that the classic Invasion of the Body Snatchers (1956) does. The blood test scene is an absolute masterpiece of tension. If there is little else to the characters, John Carpenter at least conveys their sense of fear, distrust and irrationality in the circumstances with absolute conviction. (Although it is a headache in trying to backtrack and work out who was Thing-inhabited at various points – this is a film where not a great deal of attention has been paid to threads of continuity). Mostly, the film is carried by its way-out phantasmagoric horrors – these alone should place it in a revisionist pantheon of modern genre classics.

Over the subsequent three decades, there have been sporadic rumours of a Thing sequel, with Rob Bottin often mentioned as director. This was finally made as The Thing (2011), which is a prequel to the events of this film. The idea of a shape-changing creature has been used in other films since, including the remake of The Blob (1988), Leviathan (1989), Proteus (1995) and Harbinger Down (2015). Other works have borrowed the basics of a group of people facing a menace at a remote base, including Alien Hunter (2003), The Last Winter (2006), Nine Miles Down (2009), The Thaw (2009), Black Mountain Side (2014) and The X Files episode Ice (1993). The Faculty (1988) pays homage to several scenes from The Thing. The blood test scene was also replicated in the killer android film Crash and Burn (1990) and the severed head sequence in in It: Chapter Two (2019).