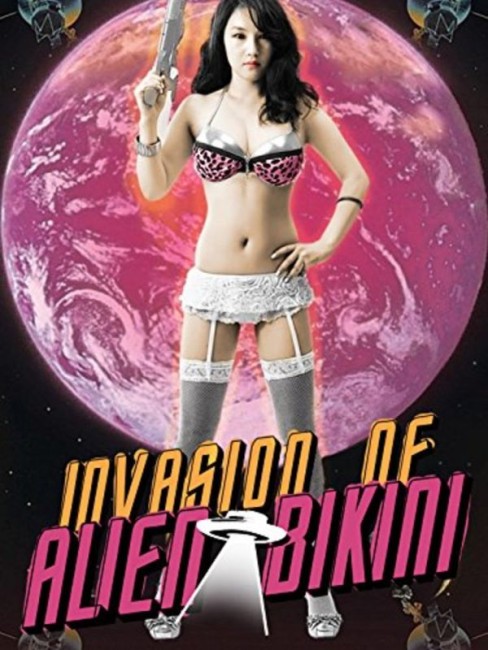 Young Gun regards himself as the city’s protector and goes into action to prevent crime using his martial arts. Coming upon a woman being attacked by three men, he intervenes to save her and then takes her home. What he is not aware is that she is an alien being that inhabits human bodies and that the three attackers were agents trying to stop the alien. The woman introduces herself as Monica. Young Gun is attracted to her and she starts to respond and come onto him. She wants to have sex because she needs to breed before midnight. However, Young Gun has taken a vow of chastity and refuses her until they can get a marriage licence in the morning. She does everything in her power, including tempting him unbearably and torturing him, to get him to forsake his vow.

Invasion of Alien Bikini is a head-scratching oddity when you sit down to watch it. It gives the appearance of being a cod-B movie along the likes of efforts such as Sorority Babes at the Slimeball Bowl-a-Rama (1988), Bad Girls from Mars (1990), Beach Babes from Beyond (1993) and Attack of the 60 Foot Centerfolds (1995), films that mimic/parody 1950s B-movie titles but are made with cynically tongue-in-cheek 80s/90s video exploitation sensibilities. The mind also does somewhat of a boggle to realise that Invasion of Alien Bikini comes from South Korea, a country that does not exactly stand out with a B-movie tradition to draw on in the same way the US does – unless you want to count the Godzilla copy Yongary, Monster from the Deep (1967) or the US-made, Korean-shot A.P.E/Attack of the Giant Horny Gorilla (1976).

That said, Invasion of Alien Bikini is not exactly the B-movie parody that its title suggests it is. (Moreover, there are no alien bikinis nor any aliens (or humans for that matter) that wear bikinis in the film – there is a woman (Eun-Jung Ha) who spends a reasonable part of the film in her bra and panties but the nitpicker in me felt that this was stretching descriptions). The film is more of a comedic variant on the sexual predator idea of Species (1995) or perhaps more closely Claudia Christian in The Hidden (1987) – maybe a Species played with the gonzo interstellar romance sensibility of a My Stepmother is an Alien (1988). That and a few dashes of a film like Defendor (2009) or Super (2010) where the hero also happens to be (in a bizarrely ill-explained series of motivations) a would-be superhero who fights crime on the streets with his martial arts.

Three-quarters of Invasion of Alien Bikini exists as a wacky play off between the two characters where Eun-Jung Ha is determined to seduce Hong Youngguen and get his sperm so that she can breed before midnight up against he who has taken a vow of chastity and refuses to give into her until they get a marriage licence. The comedic sequence starts with their mutual attraction over a game of Jenga and progresses through she having him chained up and torturing him with a feather duster and forcefeeding him blenders full of assorted spices.

These scenes come with an appealingly wacky sense of humour with director Oh Young Doo playfully breaking the fourth wall with everything from fast-forwards through Hong Youngguen’s long-winded explanations or cuts away to illustrate with diagrams or freezing the frame so that a scientist can appear and explain what is happening. Invasion of Alien Bikini moves out of its nutty seduction scene at the end to involve a chase of sorts with a trio of South Korean Men in Black but these scenes take the film away from where it works best and are less interesting. The rest however is nonsensically charming.