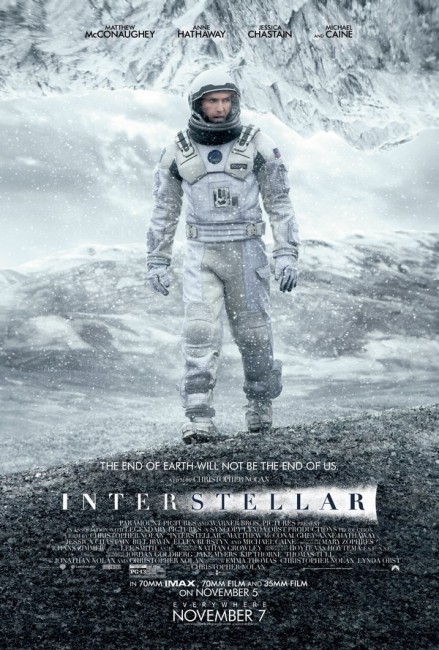 In the future, the world’s climate has become desolate. Cooper, a former NASA test pilot, struggles to maintain a farm in an area that is ravaged by frequent dust storms, while raising his daughter Murph and young son Tom. Murph is certain that there are ghosts in her room and Cooper thinks the dust patterns are forming messages that seem to indicate coordinates. In following these, they are led to the sole remaining NASA base. There Cooper’s old friend Professor Brand offers him a proposition – to fly the spaceship Endurance on a mission to Saturn and through a mysterious wormhole they have discovered there, following the paths of three previous manned flights that have sent back data on three possible habitable planets. Cooper is given two missions – Plan A to lead colonisation efforts from Earth and Plan B to deliver frozen human embryos to one of the habitable worlds and repopulate humanity anew. Cooper sets forth on the mission but parts on bad terms with Murph who is upset at his abandoning her. After emerging from cryogenic suspension and passing through the wormhole, Cooper and the rest of his crew discover things are not as they have been led to believe, at the same time as the mission befalls a series of disasters. While only a matter of months have passed on board, time has dilated due to gravitational influence and back on Earth Murph has grown to an adult and joined the NASA mission as an astronomer where she struggles with the equations that will make spaceflight easier for the human race.

Since the early 2000s, Christopher Nolan has emerged to the forefront of genre directors. Winning great acclaim with the second film Memento (2000), Nolan went onto the English-language remake of Insomnia (2002). His first major box-office hit came with Batman Begins (2005), which took the creatively exhausted Batman franchise of the 1990s, and gave it a dark new urgency in telling an origin story. This led to Nolan’s magnum opus, the epical, boundary-redefining The Dark Knight (2008) and its follow-up The Dark Knight Rises (2012). In between this, Nolan delivered other amazing works such as The Prestige (2006) and Inception (2010) and subsequent to this the non-genre War film Dunkirk (2017). Elsewhere, Nolan has also produced Man of Steel (2013), Transcendence (2014), Batman V Superman: Dawn of Justice (2016) and Justice League (2017).

Interstellar has a long screen history going back to the 1990s. It grew out of a meeting between producer Lynda Obst and renowned physicist Kip Thorne who was consulting on the film adaptation of Contact (1997) that she was producing. The two conceived a scenario that would make cinematic use of ideas from theoretical physics such as black hole theory and gravitation that were Thorne’s field of research. Among other things, Thorne is known for the idea that wormholes (which are usually sub-atomic in size) could theoretically be used for travelling interstellar distances with ease. This idea was popularised by Carl Sagan when he wrote the novel version of Contact (1980) and has become a regular incorporated into science-fiction ever since. Obst originally sold the script for Interstellar to Steven Spielberg but this was placed on hold due to his involvement with other projects. Spielberg had hired Jonathan Nolan, Christopher’s brother, to write the script but when Spielberg eventually bowed out, the script was taken over by Christopher Nolan.

Interstellar could be Christopher Nolan’s 2001: A Space Odyssey (1968). Stanley Kubrick’s classic work casts an undeniable shadow over the film such that it could be considered that the Nolans are paying homage. The plots of both films function in very similar ways and feature comparable elements – a space journey to the outer reaches of the Solar System (Saturn here, Jupiter in 2001 – although Arthur C. Clarke did have the destination being Saturn in the book version of 2001) to investigate a stargate that had been left there by mysterious aliens; a journey that ends up being sabotaged partway through where it appears that those in charge are not being truthful about the nature of the mission; the climactic scenes where the astronaut undergoes a journey through a tunnel of lights to eventually reach a place beyond human understanding that is represented in peculiarly banal human terms – a hotel room in 2001, a view in on a child’s bedroom here – from which he emerges with godlike powers.

In an era where box-office science-fiction is represented almost exclusively by superheroes and mass destruction spectacle, it is a genuine pleasure seeing a film that is rooted in solid science and high-concept science-fiction. We have a film that features such challenging concepts from physics as relativity, gravity and spacetime, time dilation effects, black holes and wormholes, which are a little more than the usual stuff that get served up to the popcorn bucket multiplex crowd. Even when we have had these on screen before, concepts like black holes were reduced to no more than a void of pretty lights that leads to the afterlife in Disney’s The Black Hole (1979) or, even worse, The Black Hole (2006) where it somehow turns into an electrical monster amok in a major civilised centre.

It is a great pleasure having a film that puts the science back into black holes – the effects team talk about how they went to the extent of creating a program that constructed a massively detailed simulation of a black hole inside a computer environment for filming. Or where the film takes time out to correctly dispel the Star Trek: Deep Space Nine (1992-9) notion that a wormhole is like a whirlpool in space and that it would more correctly be seen as a sphere due to the fact that it is multi-dimensional. There is even lovely touches like the scene near the end where we go from people on a standard baseball pitch in a Midwestern cornfield to pulling back to see the baseball being hit upwards through the window of a house that faces down from above where we realise that we are in the midst of a centrifugally rotating Bernal Sphere, something we have not seen depicted on the screen before.

There are also major differences between Interstellar and 2001: A Space Odyssey. One of these is that Stanley Kubrick made a very cold and oblique film. Characteristically, Kubrick had a pessimistic view of humanity and in 2001 he showed the humans reduced to no more than blank ciphers by the technology surrounding them – indeed, the most engaging character in the film was the least human, the computer HAL 9000. It is completely the opposite here – Interstellar could be considered 2001 remade with heart. There are the same video messages from family to astronauts here but here these come with the increasingly haunted sense that the hero has become separated from his family because of the journey he has chosen to undertake, leaving both scarred by the loss. The final message of the film is where the journey into transcendental space is not about Matthew McConaughey evolving into something beyond human but reconnecting with the most important people in his life – we repeatedly see him trying to reach across time and urge his earlier self not to leave. Like Altered States (1980), another 2001-influenced transcendental journey and film dealing with big concepts, the Nolans arrive at the sentimental end message that love is what binds humanity together.

Christopher Nolan creates a majestic and exhilarating work. In some ways, one is glad that Interstellar became a Nolan rather than a Steven Spielberg film – Spielberg would almost have certainly sentimentalised the Dust Bowl opening segments and played up far more the theme of returning home and reuniting with one’s family. Nolan has made an assiduous effort to depict spaceflight realistically– even to the extent of shooting all the visual effects beforehand and having these projected in front of the actors in the ship cockpits.

Although Gravity (2013), which came out thirteen months earlier, stole the edge on Interstellar in terms of portraying the rigorously scientific realism of spaceflight, Nolan does an amazing job here. There are some breathlessly exciting scenes during Matt Damon’s docking with The Endurance and with Matthew McComaughey’s subsequent efforts to catch the runaway station. In the planetbound sections, there are some sensational scenes with the race to flee the giant oncoming waves or the fight down into the ice glacier. Nolan has gone to Iceland to shoot there and the glaciers, along with effects images of clouds made of frozen ice or an ocean with hundred foot high waves make wonderfully credible but understated vision of alien worlds. I was lucky to see the film in an IMAX screening and some of the most beautiful effects shots are those that place everything into perspective – The Endurance reduced to a tiny dot of light against the vastness of Saturn’s rings or its shadow passing the debris field circling the black hole’s event horizon.