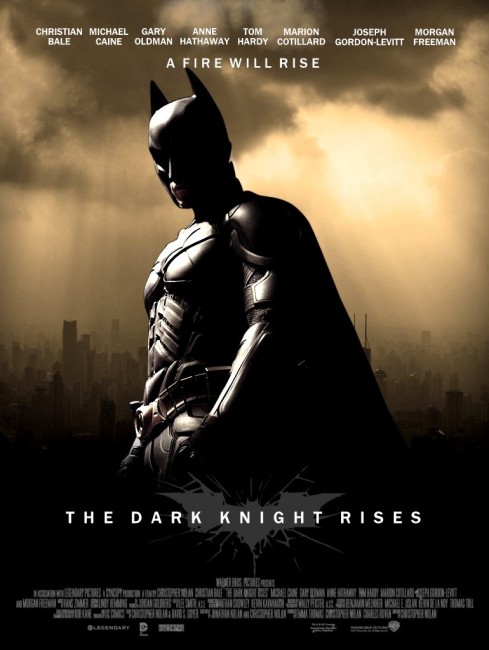 It is eight years since Gotham City has seen Batman. Blaming himself for the murder of Harvey Dent, Bruce Wayne has disappeared from the public eye and lives in reclusion in a wing of Wayne Manor. During a society function held at Wayne Manor, a waitress manages to get in to the private wing where she steals Bruce’s mother’s necklace from his safe. He confronts her but she gets away by jumping out the window. Afterwards, Bruce finds that her real mission was to steal a copy of his fingerprints and that she is Selina Kyle who has a lengthy record as a cat burglar. At the same time, the city is being plagued by a hulking, masked mercenary known as Bane who operates from a lair in the sewers. Bruce puts on the Batsuit again as Bane conducts an armed break-in to the Gotham stock exchange. There Bane’s men use the stolen fingerprints to hack in and flush all of Wayne Industries’ money on the markets, ruining the company. Batman forms an uneasy alliance and attraction to Selina’s Catwoman. However, she betrays him to Bane, a former member of Ra’s Al Ghul’s League of Shadows. Bane defeats Batman, snapping his back across his knee, and banishes him to Ra’s’s prison, a pit in the desert from which he was the only person to ever escape. Bane then hatches his plan – he takes control of Wayne Industries in order to obtain its technological developments, in particular a fusion reactor that was built for a clean energy project but mothballed by Bruce because of its potential to be turned into a nuclear weapon. He activates the reactor’s core, placing the control in the hands of an unnamed ordinary citizen and announces a plan to return Gotham City to its people, blocking off all exits to the city. Back inside the city, chaos reigns as the public declare war on the police at Bane’s bidding.

Batman sequels (indeed, most superhero sequels) becomes circuses of competing super-villains. Christopher Nolan has been attracted to some of the more exotic Batman villains – the eminently mysterious Ra’s Al Ghul, The Scarecrow (even if the character was never given an adequate treatment – although Cillian Murphy does make an uncredited cameo here as a judge sentencing people to death, although we are unsure if this is the same character as Jonathan Crane) – as opposed to more regular villains such as The Penguin, The Riddler, Mr Freeze or Poison Ivy.

Here Nolan goes with the old standby of Catwoman and the more interesting choice of Bane. Bane is relatively new character as the Batman comic-book goes – while Catwoman and most of the abovementioned were created back in the 1940s and 50s, Bane first appeared only as recently as 1993. Bane has appeared on screen before – he was little more than a sidekick in Batman & Robin (1997) played by Robert Swenson, as well as in episodes of the animated Batman (1992-4), Batman Beyond (1999-2001), The Batman (2004-8), Batman: The Brave and the Bold (2008-11) and Young Justice (2010-3), plus the animated films Batman: Mystery of the Batwoman (2003) and Justice League: Doom (2010).

In the film, the Nolans completely rewrite Bane’s origin story. In the comic-books, Bane was raised in a prison in a fictional South American republic. The film retains the story of his growing up inside a prison but change this to tie in continuity to Ra’s Al Ghul (although Bane did join the League of Assassins in later stories where he was chosen as Ra’s Al Ghul’s successor). There is also no suggestion of his Latino origin in the film – Bane’s costume in the comic-book is intended to resemble that of a masked lucha libre wrestler but here it merely becomes a leather coat and a partial facemask of never specified purpose. Christopher Nolan’s films are noted for their eschewing many fantastic elements and resultingly Bane has one of the aspects that is most associated with the character dropped – his use of the drug Venom to boost his strength via a series of speed injectors. The Dark Knight Rises does hold some continuity to Bane’s most famous story Knightfall (1993-4) wherein he broke Batman’s back and we get a scene in the film where he body slams Batman backwards across his knee, leaving him partially crippled.

As opposed to Batman & Robin and some of the animated incarnations, the Nolans have determined to write Bane as more than just a hulking bodybuilder. British actor Tom Hardy has bulked up some 30 pounds for the role to the point where his youthfully handsome features are unrecognisable. Although Bane has an enormous physical presence whenever we see him, Tom Hardy plays the character with unusual intellectual depth. I particularly liked the calm matter-of-factness with which he tells acolytes they are going to die and the understatement that comes in the lack of sound effects that accompany whenever he snaps someone’s neck. Most interesting is the way that Hardy chooses to do the voice, which comes out sounding like Patrick Stewart in full Shakespearean mode and gives an unusually theatrical gravitas to the character.

Anne Hathaway is also not the first choice you would think of when it comes to Catwoman. Hathaway has been a rising actress in recent years, going from teen roles after first appearing in The Princess Diaries (2001) to more in the way of serious acting from Brokeback Mountain (2005) through Rachel Getting Married (2008), which had her nominated for an Academy Award, and Les Miserables (2012). Catwoman is a character that I thought Christopher Nolan would have had a great deal of fun with, it offering the opportunity to introduce some sexuality and sizzle to the series, but surprisingly the part is written in far more subdued ways – indeed, Catwoman’s presence in the film is largely overshadowed by Bane. Hathaway has an alluring introduction, where her being pulled up by Christian Bale for stealing the necklace from an unbreakable safe turns into a flirtation of dialogue before she kicks away his cane and disappears out the window. They have some nicely charged scenes meeting on the dancefloor or with her encountering Batman – but then the film proceeds to do surprisingly little with her other than play out on her customary ambiguity between whether she is villainess, good girl or love interest. That said, Anne Hathaway plays the part with a lithe dangerousness mixed with a tough, calculating edge that holds its appeal. Out of the two, I still preferred Michelle Pfeiffer’s incarnation of Catwoman in Batman Returns (1992).

I liked The Dark Knight Rises; on the other hand, it felt it didn’t ignite into something genuinely amazing as The Dark Knight did. I felt somewhat disappointed with it in some respects. It never delves much into the dark psychology of the characters to create stunning metaphors of light and darkness as The Dark Knight did. In this respect, the one thing this film gives us is surprisingly an Occupy Era Batman. Much of the film swims with the imagery of the recent Recession and public vehemence against the wealthy and banking institutions. Amidst this, it becomes difficult to defend the idea of a hero who is a billionaire and part of the One Percent and so the film appropriately does much to cripple Bruce Wayne’s position of power and privilege, even take him to task for it on several occasions. There is a well written scene where Anne Hathaway warns Christian Bale that there is a storm coming that is going to wipe out his position of privilege. Much of the resultant film has plots involving corporate takeovers and collapses, individual fortunes plummeting and being reduced to poverty. Similarly, Bane’s overthrow is written in terms of the rhetoric of the Occupy Movement and talk of returning the city to ordinary people.

The other critique you could make is that the action is not as darkly driven as it was in The Dark Knight. Christopher Nolan stages an eye-catching opener with Bane and his men invading a CIA plane by capturing it on hooks and cutting the end open, which you feel should belong more as the pre-credits sequence in a James Bond film. There is lots of buzzing around on Batbikes and the introduction of a Batplane, an aerial equivalent of the armoured Humvees we have had in the other films. There are various sequences racing about the streets on these but it is not until the climactic sequence that Nolan ever stages something that comes near the fabulous sequence in The Dark Knight with the Batbike and a rocket-launcher armed Joker flipping trucks.

However, the biggest crime that The Dark Knight Rises commits is the set-up of its plot that involves keeping the central character of Batman off the screen for about half the film. During the first three-quarters-of-an-hour, Bruce Wayne has become a recluse and given up on the Batman identity, while the middle of the film writes him out of the action altogether as a captive in Ra’s Al Ghul’s desert prison. This is probably the one Batman film that features the least in the way of appearances of its title character throughout the running time.

There is certainly good writing to the film. Tom Hardy gets some marvellously articulate speeches crying his doom down on Gotham City; there is a wonderfully written scene where Joseph Gordon-Levitt goes to Christian Bale and tells he how he is aware that he is Batman and talks of the similarity of their childhoods and about keeping up masks of smiles. On the whole though, Christopher and Jonathan Nolan prefer to write political scenarios, of showing Gotham City from a citywide scale and how the actions of heroes and villains affect different strata of society. They create another improbably contorted scheme with Bane using an atomic bomb to create a Siege of Leningrad scenario within the city, although this becomes somewhat more stretched in credibility when it is revealed that this is all the machinations of another character. One of the better things about the script is [PLOT SPOILERS] when it ties in some other surprise familiar characters – introducing Ra’s Al Ghul’s daughter Talia (who was noticeably absent from Ra’s’s appearance in Batman Begins) and finally a Robin – although it should be noted that both of these characters are written in extremely different ways to the characters that we are familiar with in the comic-book. We are also finally granted a Batcave for the first time in the Nolan series.

Christopher Nolan stated that he will not return to the Batman series following this, although he did produce Batman V Superman: Dawn of Justice (2016). The Dark Knight Rises was parodied in 30 Nights of Paranormal Activity with the Devil Inside the Girl with the Dragon Tattoo (2013).

Outside of the Batman franchise, Christopher Nolan’s other genre films are:- the psycho-thriller Insomnia (2002), The Prestige (2006) about rival Victorian stage magicians, the mind-bending Inception (2010) about dream espionage, the space exploration film Interstellar (2014). the non-genre War film Dunkirk (2017) and the SF film Tenet (2020). Nolan also went onto other DC Comics properties as producer and coming up with the story for the Superman reboot Man of Steel (2013) and as producer of the mind upload film Transcendence (2014).