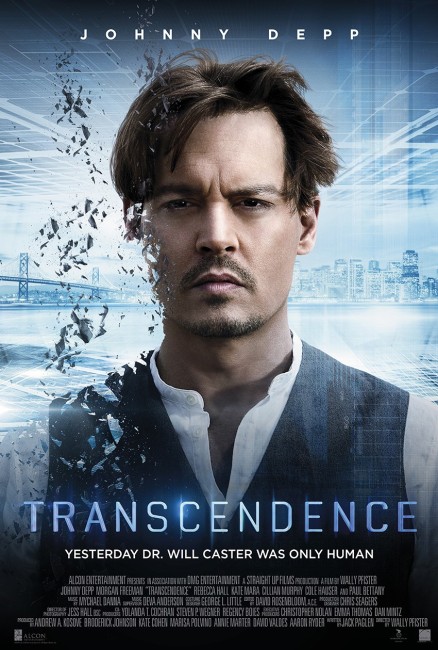 Will Caster is a brilliant researcher in the field of artificial intelligence. He and his wife Evelyn have built a working A.I. they call PINN. At a conference on artificial intelligence, Will is shot by members of a radical anti-technological organisation. Will survives but learns that the bullet was coasted in polonium, which is slowly poisoning him. With Will not having long left to live, Evelyn comes up with the idea of scanning his mind and uploading it into the computer. The operation is successfully completed, just before Will’s expires. His personality then comes to life inside the machine. As a machine intelligence, Will’s capacities begin to expand vastly. Using nanotechnology to heal people, he creates an army of willing volunteers that he can physically inhabit and takes over an entire town in the desert to build a base to house his CPU. Increasingly, Evelyn starts to see that Will has become something dangerous, while others see his creating of nanomites that spread everywhere as threatening the entire world.

Transcendence represents the directorial debut of cinematographer Wally Pfister. Pfister started out in the industry as a camera operator then graduated to cinematographer on cheap 1990s direct-to-video erotica, thrillers and horror films such as The Unborn (1991), Animal Instincts (1992), Secret Games (1992), Amityville: A New Generation (1993), Stepmonster (1993) and Object of Obsession (1994), among others. The film that made Pfister was Christopher Nolan’s Memento (2000). He has remained a regular part of the Nolan entourage since, shooting each of Nolan’s other films up to this point – Insomnia (2002), Batman Begins (2005), The Prestige (2006), The Dark Knight (2008), Inception (2010) and The Dark Knight Rises (2012).

It was almost certainly the Christopher Nolan association that had Wally Pfister given the director’s chair of Transcendence for his directorial debut. (Christopher Nolan and his wife Emma Thomas have also signed on as executive producers). Given that Pfister has shot hardly any other major films outside of his work with Nolan, it is surely evidence of the clout that the Nolan association brings that Pfister has gathered the calibre of names he does in front of the camera. Would any other first time director be able to bring together a dream cast that includes Johnny Depp, Morgan Freeman, Paul Bettany, Cillian Murphy, Kate Mara and Rebecca Hall (many of whom are veterans from Nolan’s films)?

Transcendence is what Hollywood calls a high-concept film. It is the first film to seriously deal with the issue of Whole Brain Emulation (or Mind Uploading). This is a theoretical idea being argued as a possibility by people like Raymond Kurzweil and Rudy Rucker. It has become one of the central tenets of the transhumanist movement, the idea that the human mind can be replicated and uploaded into a machine after death where it can live on in immortality. (For a fine primer on the subject, read here Why You Should Upload Yourself to a Supercomputer).

The idea has a long history in written science-fiction, with writers such as Greg Bear, Gregory Benford and Greg Egan having conducted some sophisticated versions on the theme. The concept of mind upload has only been dealt with very badly on film in efforts such as The Lawnmower Man (1992) and Ghost in the Machine (1993), which were too absurd in their treatment to ever be considered even remotely seriously, although the subsequent Archive (2020) wasn’t too bad. Somewhat better have been examples on television – such as the title character in Max Headroom (1985, 1987-8), while Mind Upload also formed a central theme in the tv series Caprica (2009-10). (Both The Matrix (1999) and Avatar (2009) have been cited as examples but are not complete Mind Upload films).

I get the impression that those who greenlit Transcendence were expecting another Inception. It is a film that buzzes with exciting Big Ideas. The opening scenes discuss Artificial Intelligence and introduces us to a semi-working one. The middle sections deal with Mind Upload and the latter sections expand out what is the most substantial use of nanotechnology in a science-fiction film to date.

All of that said, Transcendence feels like a film that raises said Big Ideas, teases us with possibilities and then lets all of them slip through its hands. It never seems to have a single thing to say about any of them – at one point, Johnny Depp gets to drop the buzzword of The Singularity but there is only the sense that the script is trying to for cool points with the geeks, not any sense they are explaining an ambitious concept.

There are so many fascinating possibilities that centre around the idea of Mind Upload – would it be a real person or merely a machine replication? Would emotions, in not coming from biological/chemical sources, be merely programmed responses? What type of world would such an intelligence live in? Transcendence discusses none of these, merely skirts around the hoary old chestnut of people wondering if it is has a soul or is just a clever program.

Moreover, what we have ends up becoming Frankenstein science. In other words, it is a work that looks to the possibilities inherent in a new scientific discovery and sees only rampant alarmism and the potential for social collapse. The connection the script makes from Mind Upload to hyper-intelligence and then the harnessing of nanotechnology, eventually necessitating the bringing down of the entire internet and civilisation itself is an utterly specious one that goes so far beyond any concerns that people in the field might have as to be a scenario that exists more in the field of crackpot theory.

The recent Her (2013) was a superb film that took a somewhat similar science-fiction scenario – real people personality A.I.’s – and explored the conceptual possibilities inherent in the idea with an enormous degree of fascination; by contrast, Transcendence takes an even bigger conceptual bite but does nothing more than reach for the well-worn playbook of machine amok cliches. In fact, while it has been produced with such a sense of its own self-importance that you would never question its cheesy B movie source, the film feels like no more than a big-budget version of The Lawnmower Man or Ghost in the Machine.