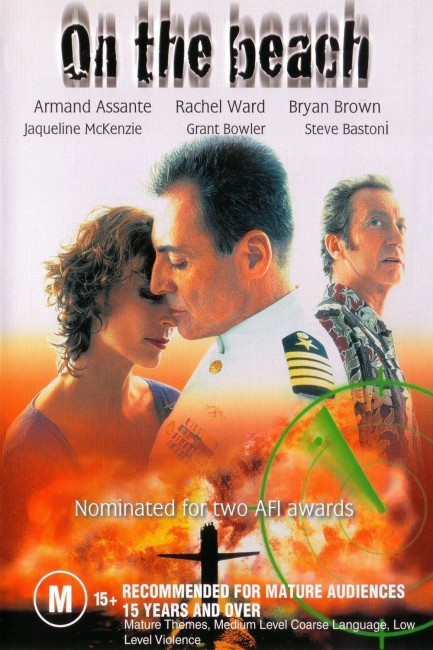 The year 2006. A worldwide nuclear war, which started with China attacking Taiwan and then escalated, has entirely devastated the Northern Hemisphere. A cloud of radioactive fallout is drifting down into the Southern Hemisphere, killing all in its path. A surviving US nuclear submarine The Charleston surfaces in Melbourne, Australia. The Charleston’s commander Dwight Towers is billeted with his Australian naval liaison Peter Holmes. There Towers meets and is attracted to Peter’s sister-in-law Moira Davidson. Moira is torn between Towers and her ex, climatologist Julian Osborne. An internet broadcast is discovered coming from Anchorage, Alaska. The Australian government recruit Towers and the submarine crew to go on a mission to see if there is any life left there. Meanwhile, as the fallout cloud nears Australia, the government hands out suicide pills. Amidst this, Holmes tries to deal with his wife Mary who has retreated from reality and is increasingly refusing to accept what is happening.

On the Beach is a tv mini-series remake of the classic nuclear holocaust film On the Beach (1959). Both works are in turn based on On the Beach (1957), a novel by Nevil Shute, a British author and airline engineer who emigrated to live in Australia for much of his life. The 1959 On the Beach film was one of the cornerstone classics of Cold War end of the world anxiety cinema, one of the first films to treat the theme of nuclear war seriously and certainly the first A-budget film to take up the topic. On the minus side, On the Beach 1959 has a classic status that exists more because of the gravity of the topic matter it broached than its dramatic depth, which tends to the wooden and heavy-handed message making.

On the Beach 2000 comes out in an entirely different era than the original. At the time that On the Beach 1959 was made, history was merely a decade’s remove from Hiroshima and the world was reeling in shock, seeing the potential for destruction that humanity had unleashed against itself. However, by the time of the remake, the milieu the original was born from no longer existed. There was no longer a Cold War or even a Soviet Union, the people who were old enough to remember Hiroshima clearly were approaching old age and most countries of the world had been actively engaged in reducing their nuclear arsenals.

With the pressing weight that the 1959 film had in trying to send an urgent message to the world gone, the mini-series has the freedom to luxuriate in storytelling rather than beating a tub. On the Beach 1959 is a polemic and a dire warning; On the Beach 2000 on the other hand is a lush romance with the end of the world as a backdrop. On the Beach 2000 also came out a few months later the same year after Fail Safe (2000), a tv remake of Fail-Safe (1964), another classic nuclear war film from the Cold War era. Unlike the On the Beach remake, the Fail-Safe remake kept the film in black-and-white and situated in the 1960s as though to admit that its story was a creation of an era’s mindset that could never be replicated today.

The mini-series does it best to keep good faith with the story. There have been a few modernisations – the cause of the nuclear war is now brought into the arena of Chinese-Taiwanese tensions. (One amusing change is that, while the original sat amid American-Soviet Cold War political tensions, the remake covertly blames much of the war on the world’s remaining nuclear superpower with the Americans being greeted with anger upon arriving in Melbourne). The Coke bottle that sent out a random radio message by being blown in the wind against a radio transmitter is now technologically updated to having the sun falling on a solar-powered laptop broadcasting a video transmission across the internet. Unlike On the Beach 1959, the mini-series makes the story an authentically Australian production, casting the parts with Australian actors with the only Americans present being those that are part of the submarine crew – wheras the 1959 film was shot on location in Melbourne, all the principal parts were played by American actors.

On the Beach 2000 advertises itself as an adaptation of Nevil Shute’s book, although in truth it is far more a remake of the 1959 film than it is ever an adaptation of the book. In the 1959 film, the character of Commander Towers was subtly changed from what he was in the book. In the book, Towers refuses to sleep with Moira because he clung to the unlikely notion that his wife and family were still alive back in the US. In the film, Stanley Kramer changed this so that there could be a romance between Towers and Moira. This romance now becomes the nucleus of the mini-series and has been blown up and given a lushly passionate sweep. Gregory Peck was wooden as Towers in the original, although Armand Assante is not that much better here. Assante is capable of giving a fine performance – see Hoffa (1992) and The Mambo Kings (1992) – but here seems to move through the role like a granite bear.

That said, director Russell Mulcahy brings the romance to a smouldering burn around him and Rachel Ward. The mini-series is shot amid some exquisitely photographed Australian scenery (although there does seem something ironic to the notion of the end of the world being seen amid picture postcard perfection). The romance does lead to one of the sillier aspects of the mini-series, which is the addition of a more upbeat ending where Rachel Ward fantasises that Armand Assante returns to her instead of departs in the submarine with his dying crew. Moreover, this is no substitute for the bleakness of the original that went out on the image of an empty city and the banner “There is Still Time … Brother” left flying.

The mini-series certainly has the luxury to pad the story out and tell it with more length than the film did. As a result there is a greater degree of emotional resonance to the characters than the 1959 film had – it invents a whole backstory relationship between Bryan Brown and Rachel Ward (who are husband and wife in real-life) and has her drawn between Brown and Armand Assante. Bryan Brown is cast in the equivalent of the Fred Astaire role and does a moderately better job than Astaire did in the 1959 film. Alas, Brown is miscast in the part of a climate scientist – I have never been a huge fan of Brown’s laidback style of acting. Far more engaging than the Towers-Moira romance is the secondary relationship between Grant Bowler (who takes up the Anthony Perkins role from the original) and wife Jacqueline McKenzie, where Bowler in particular gives a phenomenal performance. Their dilemma is one of the strongest and most heart-wrenching parts about the mini-series.

Mostly the mini-series works satisfyingly as a romantic drama, which it does reasonably depending on the extent to which one enjoys these things. Crucially though the mini-series does manage to work as science-fiction and Russell Mulcahy delivers some impressive images of the aftermath of the nuclear holocaust. There are some fine scenes with Armand Assante and the submarine crew walking through the ruins of Anchorage discovering how the people there committed suicide en masse, and some excellent digital effects during the periscope tour of the ruins of San Francisco.

Russell Mulcahy’s other films are:– the killer boar film Razorback (1984); Highlander (1986), which launched a long-running franchise, and its sequel the awful Highlander II: The Quickening (1991); the revenge drama Ricochet (1991); the mystical radio superhero adaptation The Shadow (1994); the revived mummy film Talos the Mummy/Tale of the Mummy (1998); the serial killer thriller Resurrection (1999); the tv mini-series of Jules Verne’s Mysterious Island (2005); the tv mini-series The Curse of King Tut’s Tomb (2006); Resident Evil: Extinction (2007); and The Scorpion King: Rise of a Warrior (2008). Mulcahy also wrote/produced the killer shark film Bait (2012).