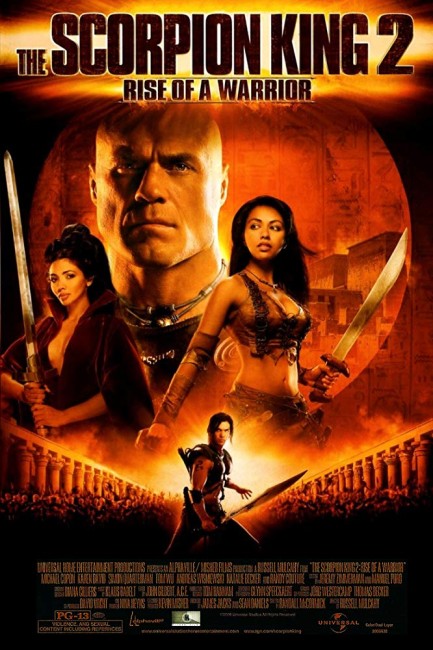 In ancient Akkadia, the famous mercenary Ashur places his young son Mathayus into warrior training school under General Sargon. However, when Ashur intervenes to stop Sargon beating Mathayus, Sargon takes revenge, using his black sorceries to kill Ashur. Several years later, Mathayus returns to Akkadia a young man who is now the finest of the trainees to enter the king’s elite Black Scorpion guards. However, Sargon has usurped the king and claimed the throne and demands Mathayus’s complete loyalty. To this extent, he brings Mathayus’s younger brother Noah to him and asks Mathayus to demonstrate his loyalty by executing Noah for treasonous speech. Instead, Mathayus turns his sword on Sargon’s men, only to find that Sargon is protected by sorcery and unable to be killed. Mathayus flees, joined by his childhood friend Layla, who wants to be a warrior but is forbidden because she is a woman, as well as the Greek poet Ari. Ari tells of the fabled Sword of Damocles, which can cut through anything and would have the power to kill Sargon. To obtain this they must enter the Labyrinth of King Minos, the lair of the bull-headed Minotaur that all slaughters all comers. There Mathayus must defeat the Minotaur so they can gain entrance to the underworld where they must then take on the goddess Astarte to obtain the sword.

The Scorpion King (2002) was an eminently forgettable spinoff from The Mummy Returns (2001). Its’ greatest distinction in retrospect perhaps might be that it was the first film outing of wrestler Dwayne Johnson still then known as The Rock, who has since gone onto become an A-list presence for himself on cinema screens. The Scorpion King seemed exceedingly lightweight, a sword-and-sorcery effort that had been quickly slung together to exploit the popularity of The Mummy films and The Rock’s presence. Most audiences seemed to forget it about five minutes after they walked out the doors of the theatre – it was not exactly a film screaming out with memorability, let alone for somebody to make a sequel. Despite such, it received a sequel (or more correctly a prequel) with Rise of a Warrior, which follows the story of how Mathayus (the character played by The Rock) rose to become a warrior in the first place. This was subsequently followed by The Scorpion King 3: Battle for Redemption (2012) and The Scorpion King 4: Quest for Power/The Scorpion King: The Lost Throne (2015) both starring Victor Webster; and Scorpion King: Book of Souls (2018) with Zach McGowan.

A couple of decades ago, Russell Mulcahy emerged as one of the most stylish directorial talents on the commercial scene. Making a name in the earliest days of MTV, Mulcahy then made two strong entries onto the big screen stage with the fine Australian-made Razorback (1984) and then the big hit of Highlander (1986), both of which brimmed to overflowing point with visual dazzle. Russell Mulcahy maintained an uneven directorial hand throughout the 1990s with the disaster of Highlander II: The Quickening (1991) and other efforts like Ricochet (1991), The Shadow (1994), Talos the Mummy/Tale of the Mummy (1998), Resurrection (1999) and On the Beach (tv mini-series, 2000) that showed a strong visual emphasis but received an uneven critical reception. Unfortunately, the Russell Mulcahy of the 00s gives all impression of a director who has lost his mojo and has become a hack who no longer seems to care, churning out dreadful mini-series like Mysterious Island (2005) and The Curse of King Tut’s Tomb (2006), as well as Resident Evil: Extinction (2007). This is not something that The Scorpion King: Rise of a Warrior does anything to reverse.

In many ways, The Scorpion King: Rise of a Warrior works better as a fantasy film than The Scorpion King. There is more of a texture and verisimilitude to the world and Russell Mulcahy creates some slick action poses. That said, The Scorpion King: Rise of a Warrior is utterly routine on all levels. One of the less appealing aspects of Russell Mulcahy’s films is a tendency towards broad humour. Here any suspension of disbelief is destroyed by the constant glib colloquialisms placed in the mouths of the hero and heroine. Their bickering, flippant relationship is wholly a modern one, not one that would ever have existed between a man and a woman in antiquity.

And then there is the dialogue, which frequently leaves one’s teeth grating: “You will not only grovel, you will kneel before me like a wretched worm,” says Natalie Becker as Astarte, the queen of the underworld, to which Michael Copon shrugs: “Don’t get agitated. We can work this out like mature adults.” Later during combat with Karen David, Astarte comes out with lines like “So you like to play?” Although the worst line is when the goddess Astarte demands a kiss from Michael Copon’s Mathayus and he rejects her: “Forget it, you’re not my type.” It is this constant glibness that wrecks an already routine plot.

Moreover, Michael Copon’s performance does not convince at all. Rather than a teen warrior, he comes across like some Keanu Reeves wannabe who gives the impression he would rather be off surfing. The upshot is of a film where nobody involved seems to have had any belief in what they were making and only regarded the exercise with cynical indifference.

The other bizarre aspect is the wacky historical hodgepodge that the script cobbles together. The Akkadian Empire did exist and was located in ancient Sumer (modern-day Iraq). There was in fact a central city called Akkad and it was ruled by a king named Sargon in the 23rd Century B.C. – indeed, Sargon was the most prominent ruler in Akkadian history, although seems to have been a good deal better regarded by history than the film here portrays him. The script also has Sargon’s rule contemporaneous with the reign of the pharaohs in Egypt and a completed Sphinx, all of which fits together historically. (There was even a mysterious ruler of unknown identity in Ancient Egyptian history who has been referred to by historians as the Scorpion King and comes from around this period). However, the script also namedrops the Greek historian Herodotus, who did not live until the 5th Century B.C., about two thousand years after the Akkadian empire.

The script also has Mathayus encountering King Minos’s Labyrinth – King Minos, The Minotaur and the Labyrinth are all mythological characters and cannot be seen as historical, however Minoan culture (from which the legend of Minos derives) did not gets its civilised act together until about 500 years after the rule of Sargon. The goddess Astarte does originate from Sumerian tradition but there she is the goddess of fertility, not the ruler of the underworld.

The other amusing inclusion is the Sword of Damocles. Again, this comes from another story in Greek myth and has no place in history. According to the original Greek tale, Damocles was an officious courtier who was invited to swap places with the king and afterwards found that a sword has been hanging above him suspended on a fine cord the entire time. The Sword of Damocles story has been interpreted as an allegory for how life hangs by a precarious balance or of how we are often unaware of impending doom hanging over our heads at all times. In the original tale, the sword has no properties other than simply being an ordinary sword, but in the film gains great magical powers and the ability to cut through anything.