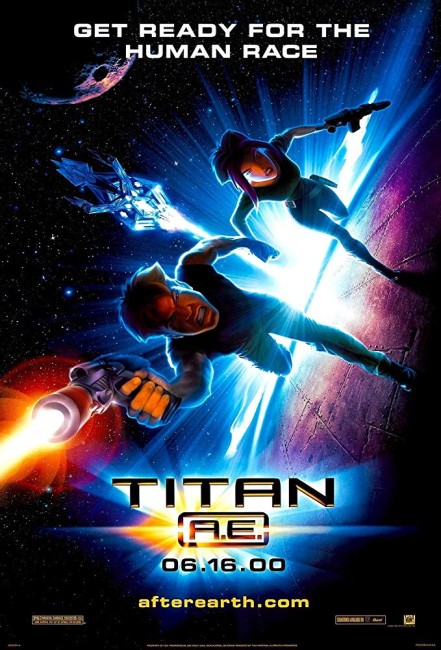 In the year 3028, the alien Drej attack and destroy the Earth. During the evacuation, young Cale Tucker is separated from his father who escapes aboard a spaceship containing the top secret Titan project. Fifteen years later and the remnants of humanity eke out an existence as intergalactic drifters. Cale is working as a spacer when he is contacted by Captain Joseph Korso who tells him that the map Cale’s father tattooed in his palm gives directions to the whereabouts of the Titan, which holds humanity’s last hope. Cale joins Korso, Korso’s navigator, the lovely Akima, and his motley crew of aliens on an expedition across the galaxy to find the Titan. The entire time they are pursued by the Drej and face Drej traitors within Korso’s crew.

With the massive success of Star Wars Episode I: The Phantom Menace (1999), which became the No. 1 box-office hit of its year, filmmakers realised that there was a vogue for space opera all over again just as there was when Star Wars (1977) came out. Just before The Phantom Menace came out, there was Wing Commander (1999), followed by this fine animated effort. In fact, when you think about it Titan A.E. is a far better film than The Phantom Menace ended up being.

The script comes from such genre luminaries as Ben Edlund, creator of the The Tick comic-book and later animated The Tick (1994-6) and live-action The Tick (2001-2) tv series, which is the funniest superhero spoof ever made; subsequent Tim Burton writer John August; and Joss Whedon, creator of the Buffy the Vampire Slayer phenomenon, as well as an excellent space opera of his own, the tv series Firefly (2002-3) and its film spinoff Serenity (2005), as well as as director of the Marvel Comics adaptation The Avengers (2012). The trio use the space opera tropes – the youthful hero who inherits an artifact of destiny, the planet-hopping quest, the romance, the turncoats, the mottly supporting crew of aliens – in a better and much more mythical way than George Lucas did in The Phantom Menace.

Titan A.E. comes from Don Bluth, a former animator at Disney. In the late 1970s, Don Bluth quit Disney, disappointed at the then current management’s abandonment of the classic Disney animation tradition. Bluth then launched a valiant attempt to recapture the classic Disney tradition with the superb The Secret of N.I.M.H. (1982). However, N.I.M.H. was a failure at the box-office and Bluth sacrificed higher artistic ambitions and plodded on the next decade-and-a-half with likeably middle-of-the-road fare such as An American Tail (1986), The Land Before Time (1988) and All Dogs Go to Heaven (1989). By the early 1990s, Bluth’s work had fallen into an utter insipidity with the likes of Rock-a-Doodle (1991), Thumbelina (1994), A Troll in Central Park (1994), The Pebble and the Penguin (1995) and Bartok the Magnificent (1999). By the mid-1990s, Disney had made a spectacular return to classical style and Don Bluth ironically found himself in employ by other studios seeking to capitalise on the trend. During this period, Bluth produced Anastasia (1997) and then Titan A.E., easily his best films since N.I.M.H..

A bigger budget has allowed Don Bluth to create some dazzling vistas of 3D animation – the opening vision of Earth’s destruction or the end shot pulling back from a couple on the planet’s surface to ships arriving in orbit are awe-inspiring in scale. The action sequences – the escape from the diner and space station, including a seat-edge leap from a damaged spaceship without a spacesuit – shot with the fluidity of an action movie, are exhilarating. The set-pieces with the heroes being pursued around explosive hydrogen balloon plants on the planet Secharim or the climactic scenes with two spaceships hiding from one another in a planetary ring of giant ice shards are breathtaking, easily able to rival the pod race sequence in The Phantom Menace for imagination and exhilaration. Don Bluth even throws in a dazzlingly beautiful sequence with the spaceship ducking in and around coloured cloud masses pursued by luminous light angels for no other reason than the sheer beauty of the sequence.

The plot is on the generic side and shortcuts on telling us one or two vital details – like exactly why the Drej want to eliminate humanity as opposed to any one of the other alien species that litter the film – but Titan A.E. is otherwise a beautiful and intelligent space opera. What is perhaps saddest about Titan A.E. is its failure to make any dent at the box-office in the 2000 summer season. Indeed, with it only earning back half its $70 million budget worldwide, the film was such a big flop that it caused the closure of 20th Century Fox’s animation division and Don Bluth to quit filmmaking for developing videogames. Maybe it is simply that there is no audience for intelligent animation pitched for adults rather than children. A shame.