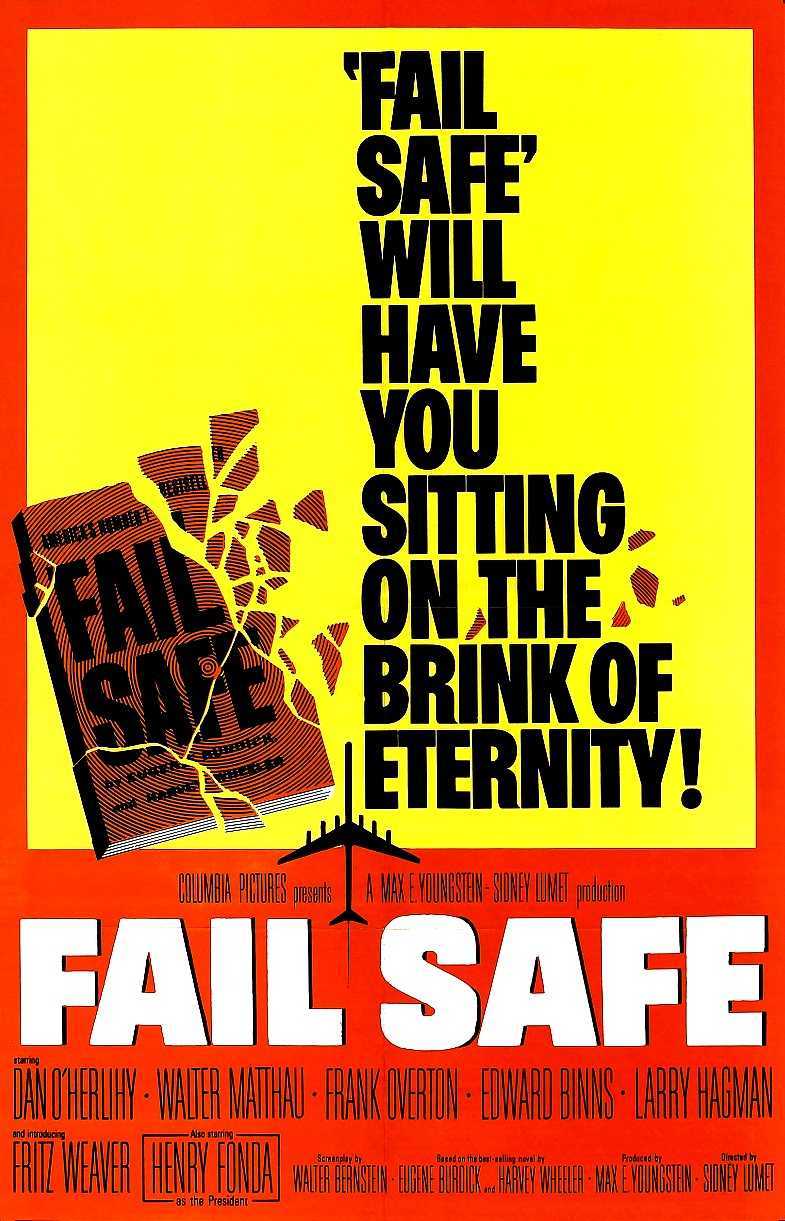 A nuclear strike alert is called on Russia when an unidentified flying object is detected over US airspace. This is found to merely be a plane gone off course and the strike is called down. However, one bomber squadron cannot be contacted due to Russian radio interference and it proceeds beyond fail-safe limits. The President contacts the Russians who drop the radio interference to allow them to make contact. The flight commander ignores the communique, believing this to be an enemy tactic. An adviser urges the President to use this as an opportunity to deal with the Communist threat for good. Instead, the President gives the Russians the information necessary to shoot the squadron down. However, one of the planes gets through and drops an atomic bomb on Moscow. The President is left with the only option of having to allow the Russians to drop a bomb on New York City in return.

Almost all science-fiction to emerge out of the 1950s in one way or another has the spectre of nuclear war and the A-bomb hanging over it – at the very least comes informed by the stark tensions of the Cold War. The 1950s masked these fears in allegories of monsters revived by atomic radiation going amok but ultimately being vanquished by the forces of law and order, or else survivalist tales where a white man and a woman would optimistically set forth to repopulate the world anew.

Into the 1960s, the Cold War intensified and correspondingly the science-fiction films of the period developed a stark tension, beginning with On the Beach (1959). There came the sense that now all earlier assurances had been shot out – for in 1962 with The Cuban Missile Crisis, the USA suddenly had to confront the possibility that such a nuclear war was no longer a looming but unspecified fear but an imminent possibility. The films of the 1960s dealing with nuclear war, which include On the Beach, Fail-Safe, Stanley Kubrick’s classic Dr Strangelove or, How I Learned to Stop Worrying and Love the Bomb (1964) and the pseudo-documentary The War Game (1965) now all translate this fear from the level of allegory to that of bleak realism.

In Fail-Safe, director Sidney Lumet creates an incredibly stark tension, evoking a genuine sense of what it must have been like during the Cuban Missile Crisis with the seconds ticking away in dread as the sweat drips on character’s foreheads. Lumet stages the film in terms of a series of dramatic peaks – each scene begins on a faint hope, tensions build to frightening confrontations and then each is crushed with nightmarish succession. Like Dr Strangelove, Fail-Safe is confined to only three sets. Sidney Lumet creates an enormous tension out of a bare minimalism – the most starkly effective scenes occur in the Presidential conference room, which Lumet strips to a single stage consisting of two men, a bare room, a table and a telephone.

Many similarities can be drawn between Fail-Safe and Dr Strangelove. When Stanley Kubrick made Dr Strangelove, he decided that Peter George’s novel Red Alert (1958) was unable to be filmed straight, that the reality of nuclear war was so grim the only way to perceive it was as a black comedy. As some have snidely observed, the material here might have made for an even blacker comedy than Dr Strangelove.

Commentators have jumped on the seemingly absurd ending where President Henry Fonda orders New York City to be nuked in order to demonstrate to the Russians that the bombing of Moscow was an accident. It is certainly hard to believe that a leader could willingly make such a decision. You can just imagine the ending with The President allowing New York City to be nuked in the hands of Stanley Kubrick and enacted by Peter Sellers’s buffoonish President – the results would have been unwatchably bleak. That said, the ending is one that that Fail-Safe plays with an absolute and shattering dramatic conviction.

The film also offers the end message “The producers of the film wish to stress that it is the stated position of the Department of Defense and the US Air Force that a rigidly enforced system of safeguards and controls ensure that occurrences such as those depicted in the story cannot happen.” This makes Fail-Safe a film that ultimately opts to back away from its nightmare and leaven it with the reassurance that this is only presenting a fiction. Moreover, it is one where in inserting this comment, the film sides with assurance in the forces of society, that the US Government is sane and stable and would never allow such to happen. The disturbing thing about the Cold War is that the US Government almost did let it happen – the Cuban Missile Crisis.

By comparison, Dr Strangelove does not see the need to back away; rather it sees the people in power as literally cartoon figures and lunatics, one where the determined realism of the film’s presentation is all the more frightening because one realizes that this is exactly what could happen. On the other hand, Fail-Safe raises the stark possibility but then runs away from the realism of it and says “it could never happen this way.” Nevertheless, Fail-Safe is compulsive viewing as an historical artefact, revealing just what a level of hair-trigger tension that US-Soviet relations and the very real possibility of nuclear war existed on during the 1960s.

Fail-Safe is also a film that writes speeches. Actors tend to represent polemic points-of-view and deliver boiler face speeches rather than appear as rounded characters. You cannot though deny that the film marshals an interesting series of debates. The cast are all excellent to a man, each playing what are one-dimensional roles with complete assurance. Henry Fonda does a brilliant job, reflecting the intensity of decision and continued failures with a wearying weight, and a young Larry Hagman is impressively understated opposite him as the Russian interpreter. Walter Matthau, in stark contrast to the curmudgeonly likeable performances he was typecast in after The Odd Couple (1968), makes for an alarmingly cold and clipped character, arguing in favour of the most xenophobic response with a disturbing plausibility. There is an interesting scene between him and Nancy Berg as a woman he meets at a party who gets turned on by the idea of nuclear war.

Fail-Safe was later remade as a tv movie, the also excellent Fail Safe (2000), directed by Stephen Frears and with Richard Dreyfuss as The President alongside an all-star cast. This was also filmed in black-and-white and had the interesting feature of being broadcast live.