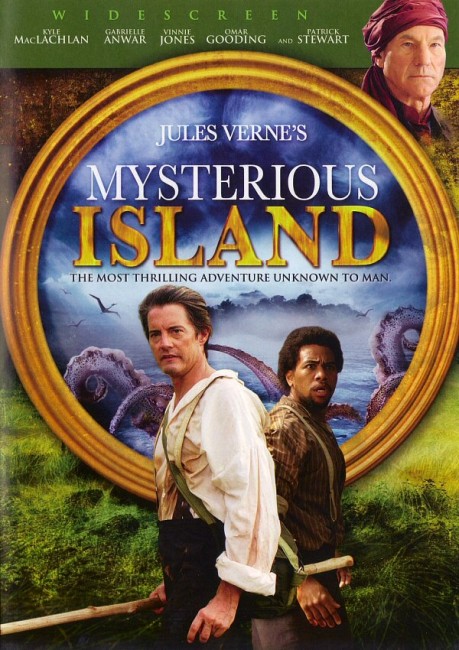 Virginia, 1863. A group of Union prisoners led by Captain Cyrus Smith make an escape from a Confederate prison camp outside Richmond by stealing a moored hot-air balloon. However, the balloon develops a leak over the ocean and crashes on a tropical island. The group wash ashore to find the island is inhabited by giant-sized animals and insects. Separated from the party during the crash, Cyrus comes around in a compound that has been built on the island by Captain Nemo. Nemo desires Cyrus’s engineering skills in helping build a super-powerful bomb made of thorium (the rare substance found on the island that causes the animals to grow to giant size) with which he intends to put an end to war. Cyrus disagrees with Nemo’s goals so Nemo throws him out of the safety of the compound to make his way in the wild. Cyrus rejoins the group and they build a shelter inside a cave. They face further threat from pirates led by Captain Bob Harvey who have come seeking a medallion that leads the way to a treasure hidden on the island.

Mysterious Island (1875) was Jules Verne’s sequel to the hugely successful Twenty Thousand Leagues Under the Sea (1870). In the book, a group of Civil War soldiers make an escape by hot-air balloon and are stranded on a desert island. Mysterious Island is almost entirely a story of desert island survival – one where Verne seems to be riffing on Robinson Crusoe (1719). The bulk of the story concerns the ingenuity with which the castaways fabricate many of the basics of civilisation, including even smelting iron, building explosives and a telegraph – with their bare hands. The castaways get mysterious aid throughout the story and in the end chapters their benefactor is revealed to be Captain Nemo. There are several important points to note about Jules Verne’s version of Mysterious Island – the first of these is that it is largely a desert island survival story and secondly that there are no science-fiction elements to it with the exception of Captain Nemo’s submarine at the end. There are certainly no giant animals, or for that matter any aliens or mermen. Indeed, there are no women present in the story, which is something that has been added to spice up almost every filmed version.

The oddity about these film versions is that, while most of them have paid lip services to the basic elements of the Jules Verne story (escaping Union prisoners, hot-air balloons, desert island survival, Captain Nemo), almost all of them have been turned into science-fiction stories with a number of fantastic elements added that were not in the original story – merpeople in the 1929 version, invaders from Neptune in the 1951 version, a host of giant-sized animals in the 1961 version, and time travel in the 2012 version. Indeed, the 1961 version, which was turned into a vehicle for Ray Harryhausen’s stop-motion animated effects, has become fairly much the standard version and the idea of the island inhabited by giant animals has since been copied by both the 1981 and 2012 and this version. In fact, the Mysterious Island mini-series here is far more of a remake of the Ray Harryhausen film than it is of the Jules Verne book. It should be noted that the film versions that conduct the most faithful adaptation of Mysterious Island – the 1941 and 1972 versions – are generally regarded as the dullest (as well as the most obscure versions to find copies of).

Mysterious Island was made by Hallmark Entertainment, the production company that has made a great many adaptations of classic stories. (See bottom of page for a full list of their genre productions). Hallmark had notedly made an adaptation of Twenty Thousand Leagues earlier with the tv movie 20,000 Leagues Under the Sea (1997) starring Ben Cross as Captain Nemo. With Mysterious Island, Hallmark have handed the reins to Australian director Russell Mulcahy.

Russell Mulcahy was one of the first MTV directors and has had a distinguished career turning out genre films since the 1980s with the likes of the killer boar film Razorback (1984), Highlander (1986), which launched a long-running franchise, Highlander II: The Quickening (1991), the revenge drama Ricochet (1991), the mystical radio superhero adaptation The Shadow (1994), Talos the Mummy/Tale of the Mummy (1998), the serial killer thriller Resurrection (1999), Resident Evil: Extinction (2007) and The Scorpion King: Rise of a Warrior (2008). From the 00s onwards, Mulcahy seems to have specialised in directing tv mini-series – he also conducted the remake of On the Beach (2000), the non-genre war series The Lost Battalion (2001), a further Hallmark mini-series with the inane The Curse of King Tut’s Tomb (2006) and the pilot for the revival of Teen Wolf (2010).

What can be noted about Russell Mulcahy’s output is that while many of his earlier works – Razorback, Highlander, The Shadow – are fired up with a genuine visual stylism, his work of the 00s and particularly for television feels like it is made by someone who is looking only to the paycheque and no longer cares anymore. This is particularly the case with his two mini-series for Hallmark, which collapse variously into the indifferent, the ridiculous and plain shabby.

Russell Mulcahy does particularly poorly here when it comes to the special effects. The balloon journey – especially when it is compared to the magnificent journey in the 1961 film made 44 years earlier – is shabby and lacking in any drama. There is no storm; the backgrounds are obvious green screen inserts; and we never see any of the crash itself. The mini-series’ credibility sinks badly the moment when, not long after arriving on the island, the survivors are chased by a digitally created giant praying mantis – an image that looks as ridiculous as it sounds.

The menagerie of giant animals throughout – rats, mosquitoes, snakes and spiders – do not improve on this any. The worst of these is a scene where we get a giant snake attacking and rearing up over Vinnie Jones, which contains some of the shoddiest digital effects ever seen in a professional production. Credibility is not helped by an unintentionally absurd scene where Kyle MacLachlan sits down at a dinner table in front of a red pincer about three-feet long as Patrick Stewart announces: “I think you’ll enjoy the lobster.” A substantial part of the second half of the mini-series is taken up by the various machinations and plotting concerning the pirates. Here Russell Mulcahy sets up much in the way of swashbuckling, subterfuge and sword and gunfights, which go on for a substantial period of time but fail to create any interesting drama. Most of the action feels impoverished.

Like all the other versions of Mysterious Island, the mini-series sees fit to add a heap of other elements to Jules Verne’s basic desert island survival story – thus here we get a menagerie of giant-sized animals; Captain Nemo attempting to build a ‘thorium bomb’; and, as with most other versions, there are two women along for the journey to add a dash of romance. Surprisingly, the crew of scurvy pirates is a plot element that is in the book (one that has been cut from almost all other film versions), although here this is wedded onto a new plot about the pirates seeking a treasure hidden on the island, the way to which is shown by a map that conveniently happens to be on a medallion worn by one of the women. The mini-series does one thing differently to all the other versions – it introduces Captain Nemo early in the show. Jules Verne and the other film versions have Nemo appearing much later, usually at the end. The reason for this is possibly in order to exploit the presence of the character, and because the mini-series has such a lengthy running time (172 minutes without commercials). Indeed, it is not until the second half of the mini-series that any aspects of Jules Verne’s desert island survival story kick in – most of the show concerns itself with Nemo, the giant animals and the pirates. Everything predictably goes up in the tired cliche of an exploding volcano at the climax (altrhough to be fair that was in the book).

The casting is not exactly inspiring either. There are a number of actors who have all given fine performances elsewhere – Kyle MacLachlan, Patrick Stewart, Gabrielle Anwar, Roy Marsden. All, with the exception of Roy Marsden (who it should be noted has substituted a pseudonym on the end credits, although not the opening ones) seem awkward or to be coasting through their roles. The worst performance comes from former British soccer player Vinnie Jones as the pirate captain in one of the world’s least convincing long hair wigs.

Patrick Stewart is badly miscast as Captain Nemo. His Nemo seems weak and frail, at best cantankerous – but certainly not with any of the brooding loner qualities that Jules Verne invested the role with and were memorably incarnated by James Mason in the classic Disney version of 20,000 Leagues Under the Sea (1954). The character of Captain Nemo is also completely changed from what it was in Jules Verne’s Mysterious Island – there Nemo was benevolent, secretly aiding the castaways; here he is misanthropic and happily abandons them in the wilderness when Kyle MacLachlan will not go along with his plan to create a bomb.