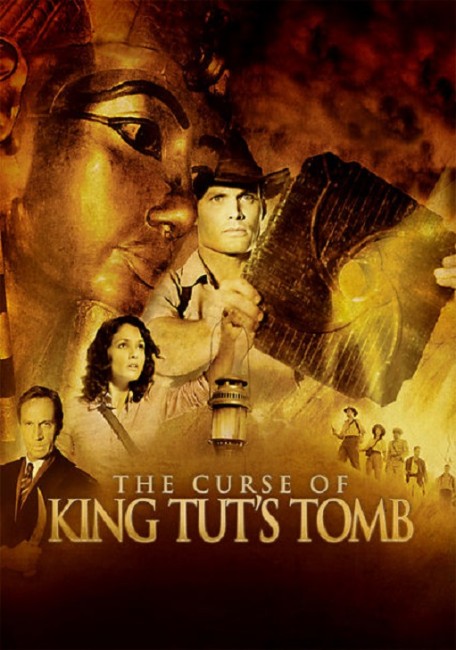 aka The Curse of King Tut

The early 1920s. Archaeologist-adventurer Danny Fremont has searched the world for the four quarters of the Emerald Tablet of the Ancient Egyptian pharaoh Tutankhamun. Once reunited, the tablets will reputedly be able to unleash Set, the Great Beast that was imprisoned by Tutankhamun. Danny has uncovered three of the quarters of the Tablet but ruthlessly ambitious rival archaeologist Morgan Sinclair has taken all of these from him at gunpoint. Sinclair works for the Hellfire Council who desire to rule the world via occult power. In Cairo, both Danny and Sinclair increase their efforts to find the tomb of Tutankhamun where the last quarter of the Tablet is believed to be. The Hellfire Council try to impede Danny by having the university cut his tenure and getting his publisher to drop his contract. In the marketplace, Danny meets a madman that he believes is possessed by the spirit of Tutankhamun and copies down a map he sees appear on the man’s chest. Danny then uses unorthodox ways to mount an expedition and they are successful in finding the tomb. However, Sinclair mounts all effort and steals the last piece of the Tablet. Upon bringing the pieces of the Tablet together, Sinclair becomes possessed and sets out to prepare the way that will allow Set dominion of the Earth.

The direction of The Curse of King Tut’s Tomb has been handed over to Australian director Russell Mulcahy. Mulcahy started out as an MTV director and then premiered as a feature film director with the killer boar film Razorback (1984). Mulcahy’s greatest success came with the international hit of the first Highlander (1986), which spawned a popular ongoing franchise. Mulcahy directed the disastrous first sequel Highlander II: The Quickening (1991) and went onto a host of other films, including the revenge drama Ricochet (1991), the mystical radio superhero adaptation The Shadow (1994), the revived mummy film Talos the Mummy/Tale of the Mummy (1998), the serial killer thriller Resurrection (1999), Resident Evil: Extinction (2007) and The Scorpion King: Rise of a Warrior (2008). In recent years, Mulcahy has branched out into directing television mini-series, first with the remake of On the Beach (2000) and other works like the acclaimed war drama The Lost Battalion (2001) and Hallmark’s version of Jules Verne’s Mysterious Island (2005).

The Curse of King Tut’s Tomb was almost certainly inspired by the success of Stephen Sommers’ The Mummy (1999) and The Mummy Returns (2001), which fused the mummy film with the archaeological adventure of Raiders of the Lost Ark (1981). The Curse of King Tut’s Tomb draws heavily on Raiders of the Lost Ark for inspiration. Casper Van Dien is an almost identical shrewd archaeologist-adventurer with a flippant sense of humour in the mould of Harrison Ford. Likewise, Jonathan Hyde’s rival archaeologist has been created with the same upper-class snobbery that Paul Freeman’s Belloq had in Raiders. The quest for a buried mystical artifact that can unleash great supernatural power (and gets to briefly at the climax) follows an almost identical path in both films.

Russell Mulcahy starts the mini-series off with an imaginative prologue set in Ancient Egypt where we see Tutankhamun being granted a set of metal wings by the gods to fight off a horde of demons and then the appearance of a magnificent Set figure all in black with giant wings, which Tutankhamun takes on in a swordfight and despatches by shattering the Emerald Tablet.

Thereafter however, The Curse of King Tut’s Tomb slips into the progressively campy. Russell Mulcahy throws in numerous action sequences but these feel extremely processed. One sequence where Casper Van Dien engages in a chase through the markets in a cart, having to deal with overturned barrels, dye spilt over the pursuers and a child in the middle of the road feels more like it is a series of challenges in a videogame than a dramatically enthralling series of action perils. The CGI effects, particularly those of the snake, are routine and not particularly convincing.

The second part of the mini-series is the most disappointing. This seems construed entirely in terms of occult film cliches – the end of the world in the offing, a possessed villain sucking out people’s souls en masse, the venture into the tomb and the afterlife beyond (which seems not too different from the real world but with the addition of a few colour filters) to defeat the evil. This entire second half feels like much flash and CGI bang extruded out over little of substance happening at all.

Like the Mummy films, The Curse of King Tut’s Tomb leavens the adventure with considerable comedy relief. Here Russell Mulcahy’s frequently broad sense of humour comes to the fore. What we end up with is a variation on Raiders of the Lost Ark stripped to the level of cartoon villains and cornball dialogue. Jonathan Hyde’s Sinclair comes up with comic-bookishly extravagant tortures – torturing Casper Van Dien on a water wheel and preparing to mummify him in the Egyptian tradition while talking with relish about the prospect of dragging his brain out through his nose and offering up silly lines like: “I don’t see what all the fuss is about – evil is so much more fun.” It is cardboard villainy that in Jonathan Hyde’s overblown performance verges on high camp.

The screenplay comes from David Titcher who wrote another disastrous adventure movie flop – the Jackie Chan Around the World in 80 Days (2004) – and another Raiders of the Lost Ark copy for tv with The Librarian: The Quest for the Spear (2004). The dialogue is all glib wit that seems to be desperately trying to be hip and funny – “I’ll bet you a beer that I can dig a hole six feet deep faster than you,” “You can’t manipulate me that easy,” “Two beers,” “You’re on.” Sometimes this gets too cutely self-referential for its own good – throwaway lines like “Yeah, just like you found the fourth Pyramid and the Ark of the Covenant.” The ending of the mini-series acknowledges the historical truth about the discovery of Tutankhamun’s tomb and has the events here reversed and erased and Casper Van Dien then meeting Howard Carter in the marketplace and giving him the map. As Van Dien and Leonor Varela walk off together, Van Dien comments: “This could be the beginning of a beautiful friendship. Just something I heard somewhere,” which only ends the show on a groan of corny disbelief.

The Curse of King Tut’s Tomb is more interesting less for its drama than for the racist messages it – and by contrast the archaeologist-adventurer genre – covertly encodes. Jonathan Hyde’s professor regards the Egyptians as disposable slave labour that he can ruthlessly work until they die; hero Casper Van Dien doesn’t seem to have a much better attitude – he fools them into working for him and then runs away without paying them. Elsewhere we see Jonathan Hyde browbeating the Egyptian museum curator into giving him antiquities by wielding cultural authority over him and an incredulous scene where Casper Van Dien seems to promote the sale of fake maps in the marketplace. There seems the implicit assumption throughout this that the Egyptians are too ignorant to know the difference and that their natural cultural position is a submissive one to Western domination. Oddly, the mini-series was filmed in India and all the roles of the Egyptians throughout are played by Indians.