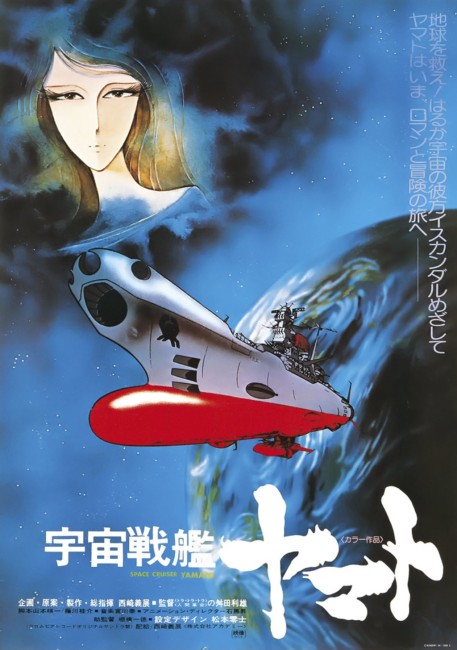 In the year 2199, the people of Earth have been forced to live underground by heavily pollution on the surface. At the same time, Earth is under bombardment by the evil dictators of the planet Gorgon. Salvation comes when a small spaceship crashes on Mars, containing a messenger from the planet Iskandair, which offers Earth the substance Cosmo-DNX that will clear up the radiation on the surface. Also included are plans for a faster-than-light drive so that humanity can travel to Iskandair and obtain the Cosmo-DNX. The people of Earth convert the rusting hulk of the WWII Japanese battleship Yamato into a powerful new space cruiser and set off. It is a perilous journey beset at every step by the Gorgons.

Space Cruiser Yamato comes in a long line of Japanese space opera, both live and animated, that stretches back at least to The Mysterians (1957). The film is based on an animated Japanese tv series of the same name that ran for one season between 1974 and 1975, which was retitled Star Blazers in the West. The film version released here has been edited together from episodes of the tv series.

The film is poorly animated – the turning of spaceships is conducted in jerky movements, all the faces assembled in a hall are static – and characterisation is almost zero. It is also amusing to notice that being the 1970s all the characters wear flares and when this is combined with Japanese animation’s tendency to draw people as three-quarters legs, characters end up as bizarrely elongated wedge shapes. Despite this, Space Cruiser Yamato has a wonderfully colourful appeal and an immense vigour to it that keeps its episodic plot going. It had the canny coincidence of being released in the West three months after Star Wars (1977) came out and obtained some success from the huge interest in space opera.

As with almost all Japanese films, there is an underlying symbolism that makes the film interesting. Since the early 1970s, pollution has become a major feature of Japanese fantasy cinema – the people of Earth are deliberately shown as a pitiful and frail mass, huddled beneath the surface. Very clearly, the film finds heroic nobility in the tiny pitiful space cruiser facing enormous odds and undergoing an extraordinarily brutal, almost masochistic, battering and hammering to the point of near-destruction at the hands of the enemy before emerging triumphant. Indeed, it is the inanimate Yamato itself that one’s sympathies are torn to rather than the faceless post-adolescents that comprise its crew. The other interesting piece of symbolic play is that of the Yamato itself, which is rebuilt Phoenix-like from the wreck of a real-life Japanese battlecruiser that was sunk by the Allies during World War II – an image that clearly reflects a debatably misguided desire on the part of the Japanese to find a nationalistic pride in fallen military glories.