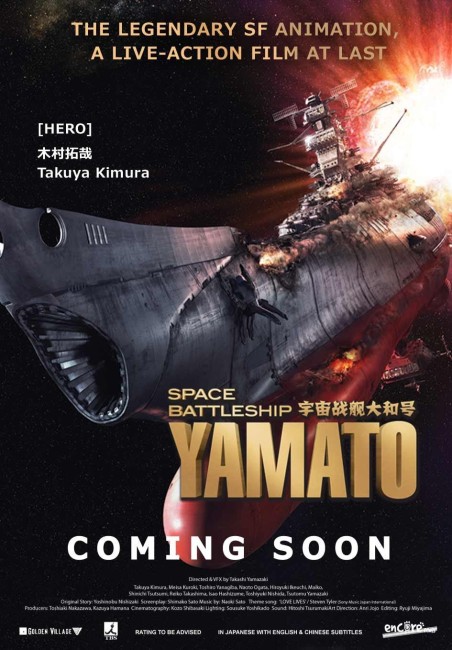 The year 2199. After repeated attacks by the alien Gamilas, the Earth has become a radioactive wasteland and humanity forced to seek shelter underground. Susumu Kodai is scavenging for salvageable materials on the surface when an alien object crashes nearby. He comes around to find that he has been stripped of his radiation suit yet has somehow managed to survive miraculously unscathed. The alien object is analysed and Earth Defense Forces then announce that it contains a message from the planet Iskandar in the Magellanic Cloud. Iskandar offers a means to clean up the radiation and has sent a device that can help humanity make the journey in a short time. The space battleship Yamato is prepared and a crew selected to make the journey under Captain Juzo Okita. Kodai signs up to command the Black Tiger Squadron of crack fighter pilots, although mostly wants to confront Okita over the fact that his brother Mamoru sacrificed the ship he commanded during a skirmish so that Okita could survive. The Yamato is launched. All along the way, the forces of Gamilas attempt to attack the Yamato and sabotage the mission. When the aging Captain Okita falls ill, he appoints Kodai as his acting captain. It then becomes Kodai who must complete the perilous journey to find what awaits on Iskandar.

This live action remake of Space Battleship Yamato comes from Takashi Yamazaki, a Japanese director who has made a number of special effects driven genre dabblings before with the likes of Juvenile (2000) and Returner (2002). More recently, Yamazaki had a series of hits with the non-genre family films Always – Sunset on Chrome Street and subsequently went onto Stand By Me Doraemon (2014), an animated spinoff from the popular anime series; the manga adapted Parasyte Part 1 (2014) and Parasyte Part 2 (2015) about body snatching parasites; the manga adapted fantasy Destiny: The Tale of Kamakure (2017); and the animated films Dragon Quest: Your Story (2019) and Lupin III: The First (2019).

Space Battleship Yamato has been mounted with a stupendous special effects budget. The effects team are seemingly determined to replicate the look of the animated series and in particular the Yamato up on the big screen. There are some stunning effects sequences – dazzling space battle and dogfight sequences, or the triumphal swell that comes when we first see the Yamato rising up out of the dirt and blasting its wave cannon for the first time, where we think it has been destroyed only for it to emerge from out of the cloud of smoke.

What must be said is that much of what we see up on screen in the live-action Space Battleship Yamato has been borrowed from the tv revival of Battlestar Galactica (2003-9) – the downbeat look of the ship modelled on the cramped look of a naval battleship, the quest through uncharted intergalactic space where the commander has misled them about what they expect to find, the space battle scenes with dozens of tiny craft defending an alien onslaught against a larger base ship, even the rewriting of a male pilot from the original as a female pilot – and elsewhere are well used ones from the book of post-Star Wars cliches – the tiny single-person fighter ships engaged in dogfights, the exceedingly generic evil aliens, the ethereal good aliens.

The original Space Cruiser Yamato film had an originality in 1977 – it was one of the first there when the cliches had not been set in place by numerous Star Wars imitators (after all, the entire series, which was edited into the film, had been created before Star Wars came out). Now though, the plot seems only to be a generic Star Wars copy – and as such Space Battleship Yamato does nothing particularly groundbreaking with it.

The only exception to this fairly average treatment might be the prevalence of typical Japanese themes about sacrifice and honour and the recasting of the central roles with young handsome leads – the aging captain of the Yamato (Tsutomu Yamazaki) is pushed aside about halfway through so that the young lead (Takuya Kimura) can take charge and furrow his brow with the effort to be serious (to be fair though, this was an element of the original series). To this extent, Space Battleship Yamato does a fair and reasonable job of filling out the ride up and down through the emotions, the tough choices, the heroic sacrifices and tragedies that go on, before arriving at a particularly downbeat ending.