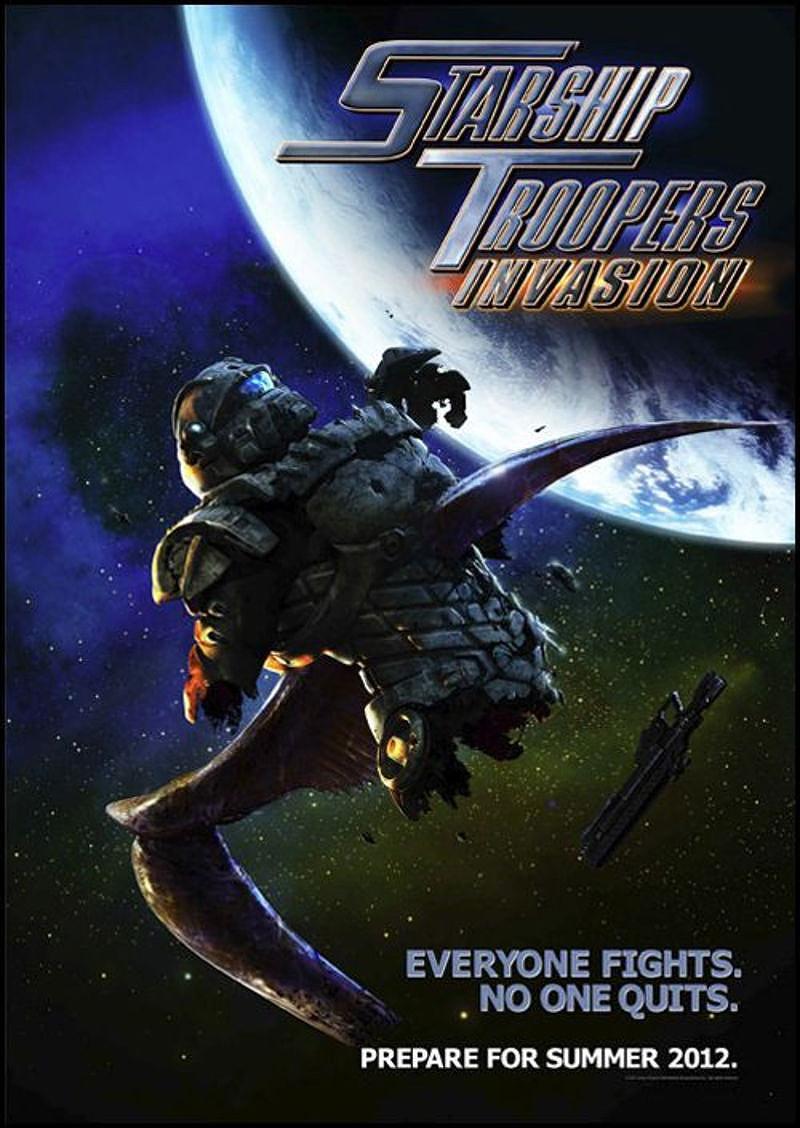 A team of soldiers from the starship Alesia are sent into deal with an infestation of bugs at the asteroid outpost Fort Casey. While they are engaged in combat, the starship John A. Warden is commandeered by Dr Carl Jenkins on a top secret mission and its captain Carmen Ibanez is abandoned with Alpha team. On the way back, they learn that the John A. Warden has abruptly lost contact and so the Alesia is redirected to search for it. Finding the ship adrift, they board to find the entire crew has been slaughtered by an infestation of bugs. They then come under heavy attack. In the midst of this, the John A. Warden turns its guns to attack and destroy the Alesia, leaving the troupe abandoned aboard the bug-infested ship. There they discover Jenkins alive and learn that he has managed to capture a bug queen. However, the queen has managed to gain control of the ship and now sets a course towards Earth.

It has been a trend in recent years for popular franchises to turn to anime as a way of doing something different with the material. The trend began with Final Fantasy: The Spirits Within (2001) but was popularised by The Animatrix (2003) where the Wachowskis expanded on the familiar by getting a group of anime directors to each deliver a different segment. This anime anthology approach has been copied by several other US franchise with the likes of Batman: Gotham Knight (2008) and Halo Legends (2010), which also featured work from this film’s director Shinji Aramaki, as well as the tv series Wolverine (2011). Elsewhere other film and game franchises have conducted feature-length anime films with the likes of Final Fantasy VII: Advent Children (2005), Highlander: The Search for Vengeance (2007), Mass Effect: Paragon Lost (2012), Iron Man: Rise of Technovore (2013), Batman Ninja (2018), Altered Carbon: Resleeved (2020) and three Resident Evil spinoffs, Resident Evil: Degeneration (2008), Resident Evil: Damnation (2012) and Resident Evil: Vendetta (2017).

Shinji Aramaki is one of the most exciting of the new generation of anime directors. Aramaki began as a production and mechanical prop designer on numerous anime tv series, including popular shows like Bubblegum Crisis (1987-91) and Fullmetal Alchemist (2003-4). He gained a great deal of acclaim with his third feature film, the first released outside of OVA and to theatres, with Appleseed (2004), a remake of an older film and manga. This was an amazing work that rebuilt the original into a dazzling Cyberpunk story, while Aramaki turned out some epic-styled hardware design and action. Aramaki returned for two sequels Appleseed Ex Machina (2007) and Appleseed Alpha (2014) and went onto make another film from a popular anime tv series with Space Pirate Captain Harlock (2013). He has also directed The Package segment of Halo Legends, which prefigures much of the space combat action that we have here.

The difference of approach is noticeable and Starship Troopers: Invasion easily becomes the best of the Starship Troopers films. It is still a work that bears lineage to the Paul Verhoeven film – following on the continuing characters of Johnny Rico, Carmen Ibanez and Carl Jenkins (while the original film’s star Casper Van Dien is present as an executive producer) – as opposed to returning to Robert Heinlein ie. it is still an action film about soldiers shooting bugs rather than a political treatise about a future society.

The major difference between this and the original film is in the tone – gone entirely is the black humour that drove Verhoeven’s film and the focus is instead on hard-edged military action. The bug hunt side was watered down in the cheap sequels and the tough brutal action here is far superior to anything that all of the other live-action films combined pull off between them.

Shinji Aramaki does hardware science-fiction like no other anime director out there. The backgrounds of the ships and stations, the shots of ships in space are stunning – there is an especially breathtaking shot of the John A. Warden emerging from the wormhole and outlined against the Earth. Starship Troopers: Invasion comes filled with so much in the way of guns, military in spacegoing uniforms and constant combat fire that it would surely give a serious erection for all of the hardcore Call of Duty players out there. The action scenes in the opening moments with the soldiers fighting off a furious assault from the massed armies of bugs and especially the epic drama of the scene where Trig races to jump aboard the Alesia as it undocks from the station are stunning. If these were sequences conducted in live-action, the film would be a cult must-see.

On the minus side, the facial features of the characters tend to the glassy plasticity of characters from the early era of CGI. All of the film’s artistic focus has been placed on the hardware, the look and detail of which is without a doubt exceptional. However, the plot never does anything astoundingly new with the military hunt bugs theme – although one suspects that that is the limitations of the premise of the Starship Troopers film franchise, which never seems to be much more than about spacegoing soldiers shooting alien bugs. The middle of the film sets up a potentially interesting deserted ship theme where the film seems to be heading along the lines of something like Alien (1979) or Event Horizon (1997), although this is soon abandoned for more shoot-ups with the bugs.

In the end, the importation of Shinji Aramaki has produced a film that in its attention to detail easily outstrips the rest of the Starship Troopers series. On the other hand, the film is never more than that. The plotting never takes the premise beyond shooting up bugs and into the fascinating areas of Cyberpunk and thoughtfully driven conceptual science-fiction that Aramaki did in Appleseed, for which it must be regarded as relatively disappointing.

Shinji Aramai returned with a further sequel in the series Starship Troopers: Traitor of Mars (2017).