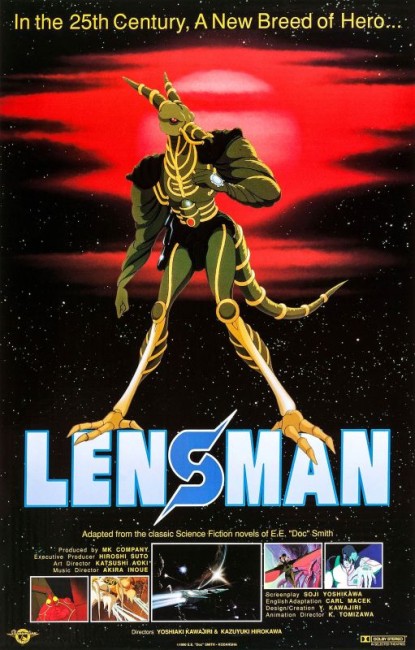 aka Lensman: The Secret of the Lens

In the 25th Century, the galaxy is under attack by the forces of Boskone. The Galactic Patrol ship Britannia manned by Lensmen crashes on the planet Mqueie with vital data about the location of Boskone’s Devil Planet. A dying Lensman transfers his Lens – a semi-sentient crystalline device built into the hand – to farmboy Kimball Kinnison before he dies. Pursued by the Boskonians, Kimball, along with nurse Clarissa MacDougall, the burly engineer Van Buskirk and the reptilian Lensman Worzel, undergoes a dangerous journey to return the information to the Galactic Patrol.

In written science-fiction, the name of Edward E. ‘Doc’ Smith is synonymous with space opera. Smith, a former food scientist and donut mix specialist, began writing in 1915 and developed an instant hit following the magazine publication of his first novel The Skylark of Space (1928), a series of adventures of following two rivals throughout the galaxy. The E.E. ‘Doc’ Smith stories became cult material to several generations of science-fiction fans. Despite wooden writing, Smith conjures a wonderful sense of adventure and ever-expanding scale. Smith’s stories buzz with galactic-scale adventures, bizarre alien lifeforms, raybeams every colour of the spectrum, superheroic powers and mental abilities, improbable scientific devices (The Inertialess Drive) that are maintained with absolute conviction and a one-dimensional red-bloodedness of character. E.E. ‘Doc’ Smith is indeed the quintessence of space opera.

The Lensman series, upon which this anime is based, is Smith’s most popular work. The series consists of Galactic Patrol (1937-8, in internal chronology the third in the series), Gray Lensman (1939-40, fourth in the series), Second-Stage Lensman (1941-2, fifth in the series), Children of the Lens (1947-8, sixth in the series) and First Lensman (1950, second in the series), as well as Triplanetary (published as a separate novella in 1934 and later expanded to be part of the series in 1948, and first in the series internal chronology). The Lensman saga follows the hero Kimball Kinnison as he struggles against intergalactic pirates, a battle that constantly expands in scale to eventually reveal that he is fighting a war that has raged since the beginning of time between two races, the Arisians and the Eddorians, the latter having eugenically manipulated humanity to produce a hardy people capable of wearing the semi-sentient Lens, which grants incredible mental abilities.

This film adaptation of Galactic Patrol was originally made in Japan in 1984 but remained unreleased in English-speaking countries until the early 1990s when Japanese anime started to flood Western markets after the success of Akira (1988). The sense of cosmic scale that Smith specialised in is something that Japanese animation does like nobody else. Lensman is best seen in widescreen.

The action is exciting, particularly the speeder-bike chases near the end or the escape from the Overlords stronghold. The filmmakers design a fabulous array of ships – the Boskonian fleet are black clouds lit up from inside with lights, or the planetary patrol ships that are like hollowed-out animal skulls drooping with pink innards. There is an equally impressive menagerie of bizarre alien creations.(Interestingly, Lensman was the first film to feature computer animation, although only limitedly so – some of the vehicles – as the technology had no advanced to the point that an entire film could be animated).

However, Lensman is not a particularly faithful adaptation of Galactic Patrol. The names of Kimball Kinnison, his girlfriend Clarissa MacDougall and his companions Van Buskirk and Worzel are all taken from the book, as are Boskone, Helmuth and the Overlords of Delgon. Equally, there as many invented characters – like the cranky nightclub DJ and Kimball’s father – who never appeared in the book. There is mention made of Smith’s great invention of imaginary super-science, the inertialess drive, and occasional snippets from the book – the scene where the Britannia is detonated while the crew escape in lifepods, Kimball’s defeating the Eddorian. However, there are more differences than there are similarities – everything but the basic bones of the book has been abandoned. (Despite which, the E.E. ‘Doc’ Smith estate appear to be happy with the finished product and their name is listed among the production houses).

Most of the changes can be readily explained by the realisation that Lensman was made not long after the success of Star Wars (1977). Thus Kimball Kinnison is no longer a strapping Galactic Patrol cadet but a naive young farmboy from a backwater planet who has the Lens and his destiny thrust upon him. The Lens itself becomes – R2D2-like – something that contains vital information about the Achilles Heel in Boskone’s defences. The Star Wars-influences verge on the laughable at times – Helmuth looks like Darth Vader and psychically destroys his lieutenants when they fail him; many of the battles are fought by small one-person fighter craft; there is a small cute robot (even though robots were a concept that Smith never used); and Clarissa even wears her hair up in a sidebun.

In 1987, the film was spun out into an anime tv series, Lensman, which has even less to do with Smith. The Lensman books would make for a fabulous live-action film if anybody is interested.