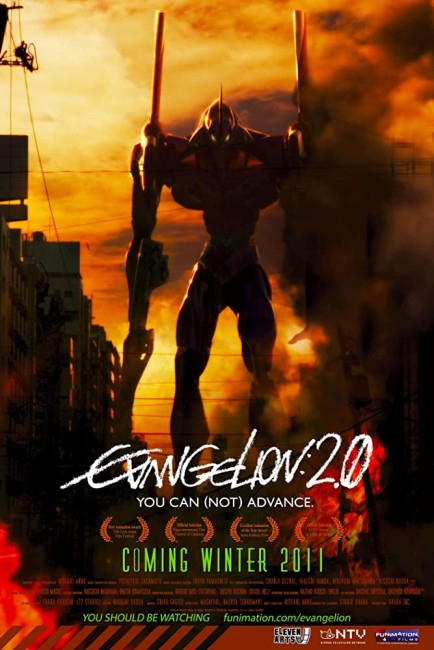 Earth rolls out its second-stage EVAs in its continuing defence against the onslaught of the Angels. Shinji Ikari is still conflicted in his relationship with his father and unsure about the role as an EVA pilot that has been chosen for him. A new EVA pilot, the individualistic and temperamental Asuka Langley Shikinami, is lodged in his apartment so that they can learn cooperation. There an attraction grows between the two of them. Asuka’s EVA then becomes possessed after an Angel manifests inside it. Shinji refuses to harm her and is shocked when his father takes over his EVA by remote control and kills her. As the attacking Angels become more powerful, the EVA pilots start to find the ability to transcend the machinery they fight inside.

Neon Genesis Evangelion (1995-6) was a cult anime tv series, concerning a group of teenagers who have been recruited to pilot vast mecha in the war against alien invaders. The series was successfully rebooted in a big-screen anime outing Evangelion 1.0: You Are (Not) Alone (2007). Evangelion 2.0: You Can (Not) Advance was the second entry in a planned quintology of films and was followed by Evangelion 3.0: You Can (Not) Redo (2012).

Evangelion 2.0: You Can (Not) Advance offers up fairly much the same thing as You Are (Not) Alone – that is to say epic anime-styled mass destruction but with a screenplay that is confusing in terms of explaining almost anything that is happening throughout. While never doing much more than the first film in terms of explaining the scenario and the nature of the Angels, Evangelion 2.0: You Can (Not) Advance replays the basics of the original and defines the characters with much more depth – Shinji’s desire not to become an EVA pilot is more strongly delineated this time, while his conflict with his perpetually absent father is brought to the fore during a potent scene where he refuses to kill Asuka in her amok EVA and his father takes over his EVA using the Dummy System and kills her while Shinji is forced to sit there powerless. (There is the great image where Shinji subsequently regains control and enacts his rage at what his father has done in a giant-scale temper tantrum where we see him stomping on a pyramid in the EVA suit).

Less interestingly, there is also a replay of the girlish romantic awkwardness from the first film. In particular, the character of Asuka – the brattish self-willed girl whose character is defined as needing to be shown otherwise throughout – seems like she belongs more in a shoujo anime. Although it does eventually discover a maturity, the romance that grows between the two seems as though it is one part of the film that is pitched to a much lower age demographic than everything else.

Evangelion 2.0: You Can (Not) Advance has an epical scale to it that rivals the anime classic Akira (1988). The film’s greatest success is during these parts. It opens on a totally outlandish scene where an Angel attacks, something that exists as an unworldly structure of vast black pylons with a rotating happy face ball atop as it strides through the crimson red ocean like an H.G. Wells Martian war machine firing vast wires down into the water and flinging battleships up into the air. There is one amazing sequence where the three EVAs are sent into action and we see them running across the city like athletes on an obstacle course, jumping across electric pylons and entire buildings, before going to confront the Angel in a battle of coloured energy fields as they tear out the red ball of energy at its centre and the Angel collapses, its tentacles falling across the city like gigantic leaf fronds that then dissolve into a tide of crimson.

The climax with various EVAs transforming into other lifeforms, even what seems to be angels, and with Shinji demonstrating the ability to warp heaven and Earth as he reaches down into the Angel’s red ball of energy to drag Asuka back to life hits that dizzyingly epical scale that can make anime so rewarding. Here the animation and all the mass destruction has become its own artform. Equally, You Can (Not) Advance is a film that is often animated with an eye for casual beauty – there being one particularly beautiful scene where the entire city opens up and we see large mirrors rotating to beam out the sunlight and the city buildings silently rising up out of the ground as commuters start about their day.

The greatest problem with You Can (Not) Advance is exactly the same one as in You Are (Not) Alone – that of a plot where what happens is not given adequate explanation. I must admit to being baffled about what was going in the scene where the Angel appears to emerge inside the EVA that Asuka is piloting and either possesses her or the EVA. There are also cutaways to somebody who waits in the airless void on The Moon in an EVA suit, although what this is about is puzzling, as it appears to have nothing to do with the rest of the film.

And what exactly happens at the end is entirely confusing. We are introduced the foreign spy Mari, a character who appears out of nowhere and takes over one of the EVAs and in so doing mutates into a new lifeform. Both who she is and the reason for the mutation goes unexplained. Next, Shinji finally accepts his role as an EVA pilot and goes into action, eventually bringing down the Angel and in the process he and his EVA transform into a transcendental lifeform and he defies dire warnings about the consequences of doing so to reach down into the red ball of energy to drag Asuka back to life. During this, he and the EVA seem to mutate into something that resembles an angel in the heavenly sense, which leaves you entirely confused about what type of film you are watching. On the sideline, comments are made that he is turning heaven and Earth around to fulfil one person’s desire and then that this is the Third Impact. Again, what is being talked about here is entirely baffling.

Subsequent to this, director Hideaki Anno branched out into live-action with Shin Godzilla/Godzilla: Resurgence (2016), as well as wrote/produced the big-screen reboot of Shin Ultraman (2022).