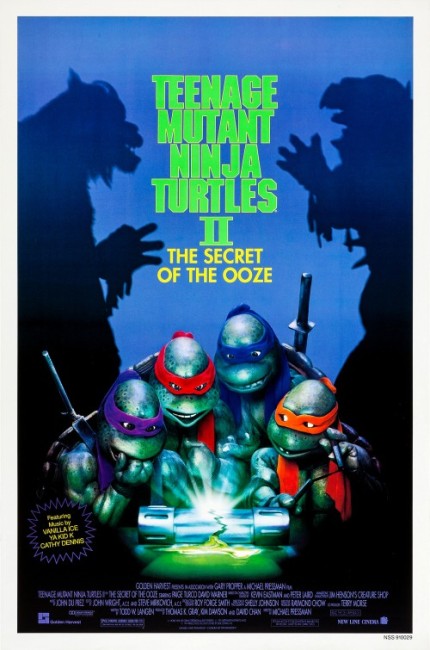 Forced to move with the exposure of their sewer hideout, the Turtles are now staying with April O’Neil. Shredder meanwhile reappears to take back command of The Foot. April covers a news story where Professor Jordon Perry of TGRI is disposing of buried nuclear waste. Splinter realises that this was the same radioactive material that created the Turtles. Shredder sends Foot agents out to steal the only-remaining vial of the nuclear waste. He then applies it to the most vicious animals he can find, a pit bull and a sea-turtle, to create creatures fierce enough to defeat the Turtles.

One of the most ludicrous things surrounding the first film was the Moral Minority outburst at the level of violence and use of weapons by the Turtles. (In the UK, for instance, the animated show was retitled Teenage Mutant Hero Turtles presumably as the idea of animated ninja was too threatening for child audiences). Perhaps the most depressing thing about the sequel is that the studio has caved in to this hysteria and, as a result, the fight scenes come with a distinct lack of weaponry being waved and of impact in the kicks and punches thrown. The Turtles now go into battle wielding everything from sticks of salami, yoyos and garbage can lids or repeatedly use moves that involve them ducking and letting opponents knock each other out. The effect is somewhat akin to the scene in Amadeus (1984) where the ballet dancers prance about in silence without music because they have been forbidden to perform ballet.

The sequel lacks the infectious enjoyability that the first film had. The manic barrage of pop culture the Turtles represented has been taken from the cute to an unpalatable level ie. has simply been the opportunity for the film to turn itself into a marketing vehicle. David Warner’s scientist prominently displays a Bart Simpson glass – The Simpsons (1989– ) had just been started by the Teenage Mutant Ninja Turtles’ distributor 20th Century Fox and was becoming a big culture phenomenon. Even worse is when the Turtles burst into a nightclub in the midst of their climactic battle and come across white rapper Vanilla Ice and start dancing, even join him on stage in between their battle with the creatures, as he performs a number called Ninja Rap.

The problems extend elsewhere – the plot only serves to connect fight scenes and bring back old characters. It has a conceptual laziness that feels as though minimal effort has been made to do anything more than that. (It is a problem shared by all of the live-action Teenage Mutant Ninja Turtles films – take the Turtles out as characters and the films feel like insipid castoff Disney tv movies). Not to mention the bizarreness of the way the early 1990s computer systems are seen as working – the Turtles find a file that has been left open on the lab computer and try to access further details, resulting in bizarre technical claims like “If the database is coded, the whole system might go down.’

Still the Henson Creature Workshop and the mime artists succeed once again in turning the Turtles into some of the most engaging and dynamic creatures on the screen – the film opens on the title card “In memory of Jim Henson” who had just died in 1990. There is such a wild kinetic charge to the manic hip-talking characters that they end up carrying the film despite its deficiencies in almost every other area.

That said, the effectiveness of the characters does not extend to the two new creatures, Rahzar and Tokka, which only look like big cartoon animals brought to life rather than the monstrous creations they are supposed to be. Despite their build-up as major nemeses, the showdown with them and the Turtles is indifferent, while the despatch of the giant mutated Shredder is a massive disappointment.

Director Michael Pressman made a handful of other films with the likes of The Great Dynamite Chase (1976), The Bad News Bears in Breaking Training (1977), Boulevard Nights (1979), Some Kind of Hero (1982) and Doctor Detroit (1983). Since then, Pressman has been working as a director and producer in television. His one other film of genre interest was the quasi-ghost story To Gillian on Her 37th Birthday (1996).