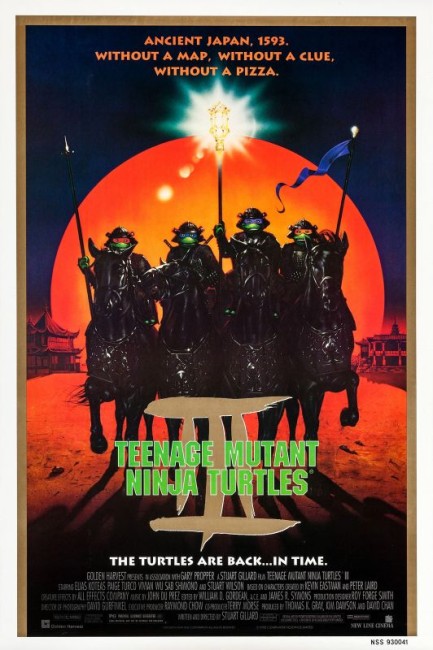 April O’Neal gives the Teenage Mutant Ninja Turtles the gift of a sceptre. However, the sceptre proves to be a magical time-displacement device that throws April and the Turtles back to feudal Japan of 1603. There the Turtles become the unexpected saviours of a group of defenceless villagers being threatened by the local warlord and an English arms smuggler.

In the second Teenage Mutant Ninja Turtles film, the martial arts action had been heavily bowdlerised after the Moral Minority reaction to the first film. Here that has been welcomely restored. Even so, the production lacks the energy that the first and even the routine second film had. The barrage of California surfer-speak has become more irritable than amusing and the Turtles themselves are stuck with too much buffoonery and unfunny popular culture in-referencing.

There is disappointingly little to Teenage Mutant Ninja Turtles III – the average half-hour episode of the Teenage Mutant Ninja Turtles (1988-91) animated tv series was funnier, had more solid plot and a better grip on the Turtles as characters than anything in the film. What it direly needed is some of the invaders from Dimension X and villainous brains in exo-skeletons that the animated series had – once the film here gets the Turtles back in the past, the plot is lazily photocopied direct from The Seven Samurai (1954). Even then, the story runs out about halfway through and the rest of the film consists of much running back and forward between the various factions, loosely connected by the transparent McGuffin of the sceptre.

One positive aspect of the film is the fine photography – especially an opening scene with riders emerging from a flaming red sunset. The period costumes are designed in scarlet reds, which strikingly contrast with the dun, dark brown textures of the castle and village.