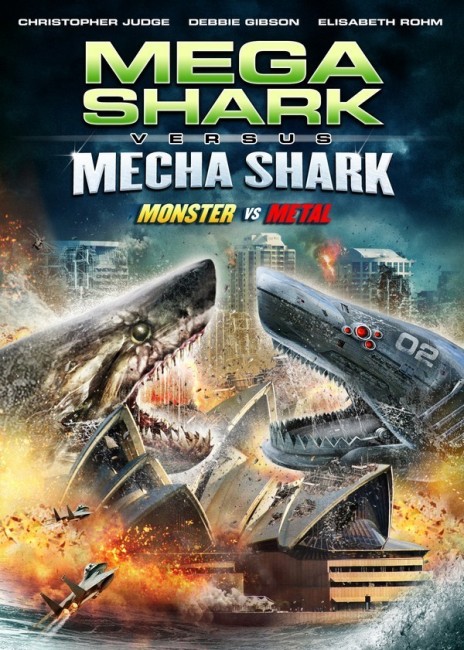 The mega-shark is spotted again, attacking shipping near Egypt. US Navy engineer Jack Turner has constructed the Mecha-Shark, a shark-shaped submarine designed for combat against the mega-shark, armed with weaponry and piloted by his wife Rosie. As the mega-shark heads towards its old spawning grounds in Sydney, Australia, the Navy employ an even larger version of the Mecha-Shark, placing the A.I. Nero in control and sending it out untested. After Rosie is injured in a skirmish with the Mega-Shark, the Navy choose to send the Mecha-Shark in in automated mode. However, damage causes the Mecha-Shark’s A.I. to develop a life of its own and switch to amphibious mode, sprouting wheels as it rampages through downtown Sydney.

The Mega Shark films and others that have borrowed the idea of pitting monsters against each other all draw on the Godzilla vs ____ films of the 1960s and 70s. Unlike Toho, The Asylum lacks a stable of other such monsters to start bringing together – and so far nobody has come up with pitting the 2-Headed Shark Attack and Sharknado films up against each other – thus all of the monsters so far have been original creations for the particular film. Mega Shark vs Mecha Shark draws inspiration directly from Godzilla vs the Cosmic Monster (1974), which came up with the idea of Mecha-Godzilla, a robotic version of Godzilla. This proved popular and Mecha-Godzilla was revived in other films such as Terror of Mecha-Godzilla (1976), Godzilla vs Mecha-Godzilla (1993), Godzilla Against Mechagodzilla (2002) and Godzilla: City on the Edge of Battle (2018).

As might be expected, Mega Shark vs Mecha Shark flounders amid cheap effects. The Sharknado and 2-Headed Shark attacks films have a much better calibre of effects but the ones in the Mega Shark films always look tatty and corner-cut – it is unclear why The Asylum didn’t choose to lavish a little more in this regard.

There is the odd amusing shot – of a tug boat thrown and knocking the head off The Sphinx. There is a repeat of the scene from the first film where the Mega Shark jumps out of the water to attack a plane, which is subverted when the Mecha-Shark leaps up to knock the Mega Shark down in mid-air.

On the other hand, the depiction of the destruction of the various ships – often no more than a single digital shot and occasionally cutaways to stock footage of navy types fighting fires or people running – is so underwhelming that the effect leaves zero impact. It does get slightly better when it comes to the scenes of the Mecha-Shark running amok through the streets of Sydney – although to anybody who has lived in the region (like me), this does not in any way look like Australia, is just The Asylum shooting on their own doorstep in California as witness the fact that in what is supposedly Australia, the vehicles are all left-hand drive and travel on the right hand side of the road whereas Australians drives the other way around.

The film could have well done with more of the tongue-in-cheek panache of the Sharknado films. There is the odd amusing line that strikes it just right like where Christopher Judge tries to head into the military danger zone to be held up by a soldier: “You’re with the US Navy? Have you got some identification?” and responds “Look, I just arrived on a giant robotic shark.”

Not to mention that the film does have some major credibility holes – if you can even use credibility and a film about a giant robot shark in the same sentence – like why Elizabeth Rohm would not have been court-martialled by the Navy about the time that the sharks went amok and destroyed first a submarine followed by a frigate. Mindedly, a film that quotes Charles Bukowski in its opening scene can’t be all bad.

Mega Shark vs Mecha Shark was the directorial debut of Emile Edwin Smith who had previously worked in visual effects since the 1990s and as a visual effects supervisor at The Asylum. Smith went on to make several other films for The Asylum with Age of Ice (2014), Flight World War II (2015) and Ice Sharks (2016).