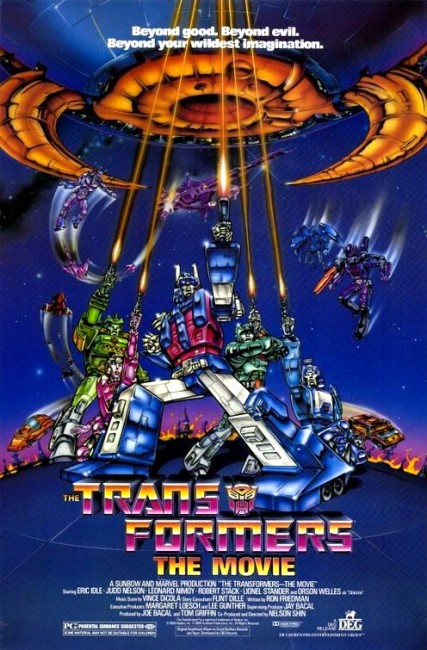 The evil Decepticon transformers – giant-sized humanoid robots capable of folding up into various mechanoid shapes – lead an attack on the good Autobot transformers’ Earth city. The Autobots win but both sides suffer losses. The power-hungry Decepticon Starscream dumps the Decepticon leader Megatron’s damaged body into space and proclaims himself the new ruler. However, Megatron is drawn into the giant, mechanized planet Unicron, which rebuilds him more powerful than before. Renamed Galvatron, he blasts Starscream away and proceeds to lead the Decepticons onto war against the Autobots.

It was Star Wars (1977) that gave the filmmaking industry a surprise by showing how much money could be made by following a popular sf/fantasy film with a line of toys. By the time Return of the Jedi (1983), George Lucas and 20th Century Fox had clued up to how much could be made and the film itself was being specifically designed around selling the toys – hence the extended sequence in Jabba the Hut’s palace, which was designed to introduce as many exotic creatures as possible. It was not long before others were thinking likewise and took the process even further – starting lines of toys and then creating a films or tv series to merchandise them. Thus we had the likes of the Care Bears movies, Rainbow Brite and the Star Stealer (1986), He-Man and the Masters of the Universe (1983-6), Dino-Saucers (1987) and Jem (1985-7) tv series, and later the Pokemon phenomenon.

Toy sales seem to be the sole motivating reason behind The Transformers –The Movie. It would seems to be the reason why we have so many subplots that have little or no connection to the main story and exist solely to introduce as many Transformers as possible. This becomes irritating to the extent it frequently becomes impossible to tell one character from another or even which side the action is being focused on at any point.

The conceptualisation of the transformers themselves seems frequently silly – one wonders why anybody would design a robot that would compact up into a vehicle. Planes and spaceships okay, sports cars is just pushing it, but, for grief’s sake, robots that turn into steam-trains and ghetto-blasters? Why would anybody wish to design robots as sharks and dinosaurs, even less, deliberately stupid ones? Or why for that matter give them such redundantly anthropomorphic features as bi-optic eyes, noses and mouths? The animation has been cheaply produced and is limited.

The film does array an interesting cast, including rather ignobly Orson Welles, whom many consider the greatest American filmmaker, in his penultimate screen performance. Leonard Nimoy of Star Trek (1966-9) fame also plays the new Decepticon bad guy, while former Monty Python Eric Idle also turns up.