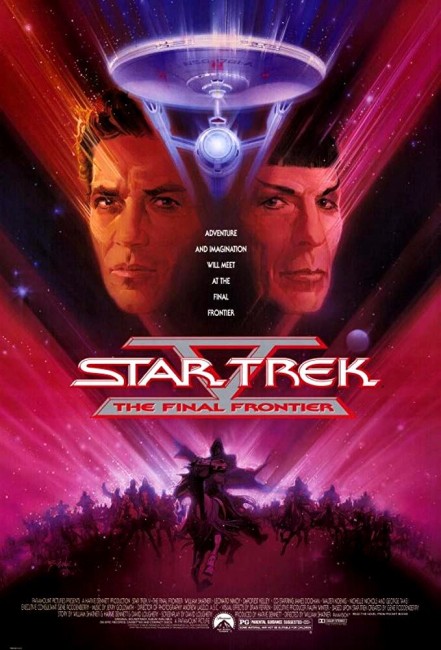 The Enterprise is dispatched to the planet Nimbus III in the Romulan Neutral Zone where the messianic Vulcan Sybok and his followers have taken Federation, Klingon and Romulan ambassadors hostage. However, this is a trap and Sybok has only conducted the move as a ruse in order to take over the Enterprise. His ability to heal emotional pain persuades the Enterprise’s crew to come over to his side and unquestioningly serve him. In control of The Enterprise, Sybok sets out on a mission to find Sha’Ka’Ree, the planet from Vulcan mythology at the dangerously inaccessible heart of galaxy where God is supposed to exist.

With Star Trek III: The Search for Spock (1984), Leonard Nimoy took over the directorial chair of the Star Trek film series. In so doing, Nimoy turned the direction of the series away from the intergalactic adventuring that it had been on tv during the 1960s and created it as a cosy comic ensemble focused around the characters and played directly to fan audiences. Nimoy continued with The Voyage Home: Star Trek IV (1986), the most outrightly comic of the Star Trek films, and one of the biggest fan favourites. Yet one could also clearly see by the time of The Voyage Home that a creeping creative conservatism was starting to make itself felt – one where the series original vision of boldly conquering new frontiers and the use of intergalactic venues as sociological soapboxes had been abandoned in favour of a comfortable nostalgic camaraderie.

With Star Trek V: The Final Frontier, star of the show William Shatner determined to follow Leonard Nimoy’s lead and made his directorial debut. Alas, the results were a disaster and The Final Frontier is universally regarded as the worst of the Star Trek films by fans. The problem it ran into was, well, the public perception of William Shatner. Shatner, for right or for wrong, has a bad reputation in Star Trek fandom. To some extent, it seems that the perception of the character and of the actor have blurred into one and Shatner is regarded as the same would-be lothario that Captain Kirk was in the tv series – something that Shatner’s various well-publicised affairs and the paternity suits launched against him has tended to bolster.

By the time of Star Trek V: The Final Frontier, Shatner’s fan image had evolved into that of sadly aging lecher – a lot of jokes circulate in Star Trek fandom about Shatner’s no longer trim weight and his toupee. There are the accusations of being a bad actor, something there is ample proof of in much of his work outside of Star Trek. Then there were William Shatner’s various ventures into singing, including his notorious covers of Lucy in the Sky With Diamonds and Mr Tambourine Man, both of which were reissued and promoted as the musical equivalents of Golden Turkeys in the 1990s.

There were Shatner’s various ventures as a writer – the TekWar series of Cyberpunk adventures, which never amounted to more than an overall mediocrity, but which are reviled by Star Trek fans and frequently (and untrue it appears) regarded as being ghost written. (Shatner even set up a live webcam feed from his home so that people could see him working on his next book to dispel the rumours). And then there were Shatner’s Star Trek Memoirs books where he made the embarrassing discovery that many of the rest of the original Star Trek cast hated him. The characterisation of Shatner by Tim Allen in GalaxyQuest (1999) would seem to be spot on as far as fan perception of the man goes.

Contrarily, Shatner, as he entered his sixties and seventies, managed to turn much of this towards his advantage. In recent years, supporting parts in films like Free Enterprise (1998), Miss Congeniality (2000), Showtime (2001) and several episodes of 3rd Rock from the Sun, show Shatner having developed a remarkable grasp of the public perception of him and starting to choose parts that deliberately play into the public perception of him as a bad ham and a sleaze, something that he played to absolute perfection as Denny Crane in tv’s Boston Legal (2004-9), his single finest acting role.

It seemed to confirm the fan perceptions of Shatner as middle-aged lecher, egoist, bad actor and bad writer when he took on Star Trek V: The Final Frontier as director and it too collapsed into abject pretension. As director, Shatner tries to tap into the Star Trek espirit de corps that Leonard Nimoy had polished in the preceding entries. However, where Nimoy had a deft comic hand, Shatner overplays it. The scenes with Shatner, Nimoy and DeForest Kelley sitting around a campfire toasting marshmallows and singing “Row, row, row, your boat,” and the deadpan Spock not understanding the meaning of “Life is but a dream” are embarrassing.

Again each of the regulars gets the opportunity to have a scene of their own, as Nimoy had established, but here the scenes are conducted with an awkward embarrassment – Scotty has become a slapstick teddybear who says “I know every inch of this ship” and then promptly slams right into a bulkhead, while Sulu and Chekov have a silly scene fighting over getting lost in the wilderness. The worst of these pieces is Nichelle Nichols who is given a supposedly nude dance scene trying to distract natives on the desert planet. The scene seems so out of place as to defy belief, not the least problem of which being that Ms Nichols, who was then at the age of 56, seems to old to be doing such an act any longer.

Certainly, Star Trek V: The Final Frontier has some positive aspects. William Shatner returns to telling a dramatic story rather than, as with Leonard Nimoy’s films, a show loosely grouped around the comic pieces. Shatner proves a competent enough director, rooting the action amid darkly lit sets and using slick mobile camerawork, which gives The Final Frontier a harder edge in contrast to the spickly polished look of the other Star Trek films and tv series. There is a good opening scene with Lawrence Luckinbill appearing out of the windswept desert to heal farmer Michael Berryman. However, the effectiveness of the scene is wrecked by the laughability of the very next scene with William Shatner climbing El Capitane mountain in Yosemite Park and Leonard Nimoy acting as Spock Superman in jet boots waiting to catch him. The film goes downhill from there.

While Shatner keeps the middle of the film moving, he has poor choice of story. This unfortunately falls back on the creakiest of Star Trek cliches. Sybok is an uninteresting character and Lawrence Luckinbill gives a humdrum performance that lacks in any of the magnetic charisma the character is said to have. The film offers no credible explanation of how Sybok manages to take away the emotional pain he reveals or how he converts people to his side. Clearly the scriptwriters had no idea how something like this would be done and do the equivalent of a conjurer’s trick, letting it happen unseen offscreen with a dramatic wave of the hand. As storytelling goes, especially when the centre of the film is dependent on it, this simply does not work.

Worst is the journey to Sha’Ka’Ree to meet God. Star Trek frequently creates God-like characters – Trelane, Apollo and Gary Mitchell in the classic series, V’Ger in Star Trek – The Motion Picture and the appealing character of John de Lancie’s intergalactic trickster Q in the various modern series. [The plot of the film has a number of similarities to the animated Star Trek episode The Magicks of Megas-Tu (1973), which had The Enterprise crew visiting the centre of the galaxy and encountering a race of aliens that were figures of The Devil throughout history].

In contrast to this, the Star Trek movies have a bad habit of tossing up grandiose mind-stretching concepts – resurrection from the dead, giant alien probes, the search for God – and, unlike any of the tv series, offering banal and underwhelming treatment of such ideas. And what we end up with here is one of the shaggiest of Star Trek‘s Shaggy God stories. In comparison to the build-up – the idea of travelling to the centre of the galaxy to meet God – the delivery is woefully underwhelming in the delivery. The effects work is poor with grainy matte lines around the ships. (It is sad when the best work in the film is stock footage from the previous entries). It slips into a woolly Star Trek happy ending – Kirk succeeds in outsmarting the God-like creature, political tensions are resolved on a big warm fuzzy and Kirk and McCoy ponder about the meaning of it all – “We were wondering if God’s really out there,” Kirk supposes to McCoy, “Maybe God’s in here – the human heart,” McCoy replies.

William Shatner’s only other ventures as a director have been TekWar (1994), the first of four passable tv movies and later a tv series based upon his series of detective stories set in a Cyberpunk future, the reportedly extremely bad UFO/alien contact film Groom Lake (2002); and the Star Trek documentaries The Captains (2011) about the actors who played the captains in the various series, Get a Life! (2012) and Chaos on the Bridge (2014) about the chaotic early years of Star Trek: The Next Generation. Shatner also wrote and created the tv movie Fire Serpent (2007) about alien fire beings and the animated sf tv series William Shatner’s War Chronicles (2015).