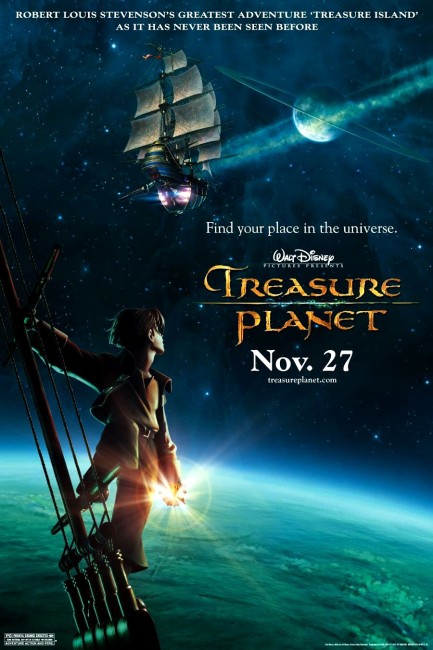 On the planet Montresor, young Jim Hawkins has been raised on dreams of the fabled treasure planet of the pirate captain Flint. While working in his mother’s restaurant, Jim comes to the aid of the alien Billy Bones who crashes in his ship. Before he dies, Billy gives Jim a holographic recording that leads the way to the treasure planet. The bookish Dr Doppler charters the spaceship Legacy under Captain Amelia to set sail and find the planet. Jim is put to work in the galley of the cyborg Long John Silver whom he comes to regard as the father figure he never had. What Jim does not know is that Long John Silver is mustering the crew of alien roughnecks to mutineer and take over the ship once they find the treasure.

Disney have never had a great relationship with science-fiction. The last (only?) good science-fiction films they put out were 20,000 Leagues Under the Sea (1954), The Absent-Minded Professor (1961) and Tron (1982). Mostly, when Disney turns to science-fiction all that emerges is juvenile comedies like Moon Pilot (1961), The Computer Wore Tennis Shoes (1969) and Escape to Witch Mountain (1975). Their attempts to compete in the modern blockbuster science-fiction era have been embarrassing – such as the widely pilloried The Black Hole (1979) or the once-posited science-fiction version of Snow White and the Seven Dwarfs (1937) where the dwarves would have been played by robots. In the early 00s, Disney started experimenting with science-fiction animation – Atlantis: The Lost Empire (2001), Lilo & Stitch (2002) and Meet the Robinsons (2007), not to mention the thoroughly bizarre talking animal/alien invasion effort Chicken Little (2005) – all of which met with mixed audience reception and box-office response. So too did Treasure Planet, earning back barely a quarter of its $140 million budget.

The clear impression one gets is that Disney regards science-fiction as little more than kid’s stuff. As with the aforementioned science-fiction version of Snow White or The Black Hole (which was not much more than 20,000 Leagues in Space), they seem to think that they can simply take other stories and put robots and alien faces on them and that is all that science-fiction requires. The sum total of Treasure Planet consists of conducting an adaptation of Robert Louis Stevenson’s Treasure Island (1883) with aliens and robots. That is all there is to the idea.

Treasure Planet makes no effort to think beyond ways of replicating aspects of the Robert Louis Stevenson story with science-fiction equivalents – Long John Silver has a Swiss Army knife cyborg arm instead of a pegleg and a cute morphing alien instead of a parrot; Ben Gunn is now a malfunctioning robot; there is a hologram instead of a treasure map. At the same time, attempts have been made to integrate pirate elements into the outer space setting so now we peculiarly have spacegoing sailing ships that have warp-engine sails and use rope rigging to change direction, intergalactic starship crews who wear tricorns and frock coats, and rayguns that are designed like muskets and blunderbusses. The two do not mix. Well they are made to but what it ends up with is crosshatched pirate/science-fiction film that is all cute concept and bad science-fiction.

It is more than clear that John Musker, Ron Clements and their writing team has done little or no research on science-fiction or even basic science. The spaceships have been designed like sailing ships and are completely open to the void, yet nobody seems to have any problem breathing air. At one point, the ship is caught up in a supernova, which consists of no more than a few pieces of flaming debris – the hero even surfs around the outside of the ship during the midst of the explosion – whereas in truth a supernova would be an explosion of a magnitude that it would make an atomic bomb look like a candleflame and would most certainly incinerate everything in its path. The alien crew are just ugly mugs – the most the film ever makes any nod towards any cultural depth of their alienness is having a crewmember who communicates by making fart noises. Treasure Planet is a film that only approximates science-fiction without capturing any of its conceptual and textural depth.

Treasure Planet comes from the directing team of Ron Clements and John Musker who had previously made the appealing likes of The Great Mouse Detective (1986) and The Little Mermaid (1989). Into the 1990s, Musker and Clements’ output, which includes the likes of Aladdin (1992) and Hercules (1997), has made for some of the most annoying films of the modern Disney animation renaissance. Subsequent to this, Musker and Clements went on to make The Princess and the Frog (2009) and Moana (2016).

In these films, Clements and Musker subvert the stories being told with an annoyingly hip modernist attitude, allowing modern colloquialism and cultural in-references to intrude and almost entirely take over the story. Certainly, that has been kept to a minimum in Treasure Planet – the film takes itself seriously and never ruptures the envelope of its own believability as either Aladdin and Hercules do. (Although, the film does get one Star Trek (1966-9) in-joke off – Doppler complains “I’m an astronomer, Jim, not a doctor”).

There are some lovely moments of animation – the breathtakingly detailed multi-plane shot cruising through the skies of the spaceport built around a half-moon or 3D shots circling the length of the sailing ship. Brian Murray does a decent voicing of the part of Long John Silver – the character dominates the film and Musker and Clements have their greatest success in bringing out Silver’s considerable moral ambiguity.

However, the sad truth about Treasure Planet is that it is intellectually lazy. There is no reason at all why a straight animation version of the Robert Louis Stevenson story could have been conducted without any science-fiction elements – all the swashbuckling and storms at sea would have looked great animated with the technical artistry that is lavished here. What kills it is Musker and Clements’ inability to tell stories on their original strengths and their perpetual persistence in pandering the stories down to contemporary audiences.