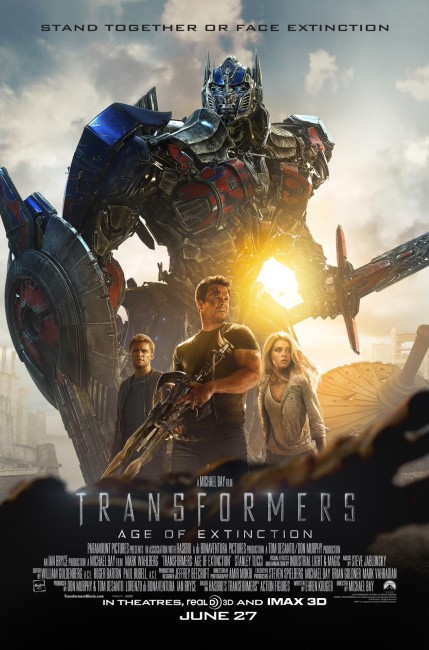 It is three years after the battle that destroyed Chicago. The Transformers have been driven out by a government purge. In Texas, Cade Yaeger is a would-be inventor who specialises in reconditioning junk. He buys an old truck and takes it home to his farm, only to find it is none other than the damaged Optimus Prime. A black ops government agency headed by Harold Attinger quickly descend on the farm but Cade, his teenage daughter Tessa and her boyfriend Shane make an escape. Optimus gathers the remaining Autobots. They discover that Attinger is allied with technology tycoon Joshua Joyce who has developed the shapechanging metal transformium from Transformer technology. Joyce has even built his own Transformer – what he calls Galvatron that is modelled on Optimus Prime. As Galvatron is unleashed, Optimus realises that the transformium has been infected by the remains of Megatron. At the same time, they must tackle the Transformer bounty hunter Lockdown who has activated a deadly Transformer bomb known as The Seed.

Transformers: Age of Extinction was the fourth of Michael Bay’s Transformers films. Beginning with Transformers (2007) and passing through Transformers: Revenge of the Fallen (2009) and Transformers: Dark of the Moon (2011), Bay, a director who normally specialises in loud and excessive action films, took an animated tv series Transformers (1984-91) that was in itself based on a children’s toy line and turned it into a big screen spectacle based around seeing massive humanoid robots beating the crap out of one another amid much in the way of mass destruction. All three films were treated with critical ridicule at the same time as topping box-office lists in their respective years.

It appeared that Bay had given up his Transformers trilogy after Dark of the Moon. He took time away from blowing things up to make the non-genre Pain & Gain (2013). Age of Extinction was initially announced under other directors before Bay finally returned to take the chair. Though this film does maintain continuity to the previous Transformers films, Bay has dispensed with any of the regulars from the previous films – Megan Fox had been dumped with Dark of the Moon but this time Shia LaBoeuf was out as well.

There is an undeniable sense of ennui that sets in before one even sits down to watch Age of Extinction. I mean, the other Transformers films feel so completely interchangeable in terms of plot and action scenes, can one truly say that there are new creative directions (as opposed to rehashing more of the same) that Michael Bay felt he needed to explore a fourth time around? We get the arrival of the Dinobots, a subspecies of dinosaur-like Transformers that appeared in the original tv series and look as absurd as they sound when conducted in live-action. Okay, so this is a film that also has a giant robot that has a beard and smokes a cigar so we can’t say that we are in the realm of well-thought out and practical robotic designs. (I am still trying to get my head around Transformers that speak in a very bad English accent and another that talks in cliche Asian martial artist epigrams).

The only other real difference is the change of cast and that a substantial part of the film takes place in China – not to mention has some blatant product placements for Chinese goods and offers unquestioning support for the Chinese regime (a clear pandering to the fact that Chinese audiences now make up a large portion of overseas sales for Hollywood blockbusters and the fact that the film comes with some Chinese co-financing).

Transformers: Age of Extinction starts in fairly much as all of other Michael Bay’s other Transformers films have. Once again, the film largely exists for Bay to string together sequential scenes with Transformers beating each other up and/or buildings being smashed and blown up. On one level, I can admire the sheer artistry of the special effects work on display – there is no doubt that Michael Bay should receive some type of award for being able to deliver mass destruction more artfully and excessively than anyone else.

Transformers: Age of Extinction is the longest of the Transformers films to date. Maybe I was just feeling tired that night or maybe it was that Bay had reached a tipping point but it felt like the film collapsed into mindless excess that washes over you with its sound and thunder. There are numerous action scenes throughout – Transformer combat, the destruction of Hong Kong, Dinobots rampaging through the streets, car chases, escapes – but at the end of it it is frequently hard to remember why particular sequences were meant to be happening. There is a sequence where the alien ship causes vehicles, buildings, even an entire ship to go flying up into the air but looking back I am unable to work out why any of this was occurring. The sequences that work the best are those that involve people – the hair-raising scenes with Mark Wahlberg, Nicola Peltz and Jack Reynor trying to escape down a series of long cables high up in the air attaching the alien ship to a skyscraper; or a sequence with Mark Wahlberg escaping/falling down the frontispiece of an apartment block in Hong Kong.

There is a longer preamble than usual to establish the new characters – Mark Wahlberg and his daughter Nicola Peltz – which one supposes is what exists as characterisation in a Michael Bay film. Much of this either involves Mark Wahlberg as a failed inventor and/or him getting angry at daughter Nicola Peltz having a boyfriend. Nicola Peltz is Bay’s new leading lady. Bay has a habit of treating his leading ladies as pin-ups dolls, dressing them in lingerie or provocative poses. He never quite goes so far as to show closeups of Peltz’s panty-clad butt or her draped over the hood of a car dripping in sweat as he did with Megan Fox and Rosie Huntingdon-Whitley – Peltz is more of a wholesome Girl Next Door type – but there are plenty of shots focused on her legs or in thin shorts. What gives this a touch of indecency is that Peltz’s character is supposed to be seventeen years old, which makes her underage in most US states. There is even a debate about how she is allowed to date Jack Reynor because of something called the Romeo and Juliet Law. Bay has gone the step of turning a character that is supposed to all intents and purposes to be underage (even if Peltz is older than that in real life) into one of his lusciously desirable pin-up girls, which skirts if not steps over the line of indecency.

The other notable thing about all of Michael Bay’s films is their conservative political outlook and ardent waving of the American flag. You’d swear between the end of the last trilogy and Age of Extinction that Bay had undergone a complete political makeover. Where the government and armed forces were heroes in the other films, they are now something sinister and out of control in terms of Kelsey Grammer’s black ops agent. Where before Bay implied that he held the flag for American entrepreneurial spirit, this film has a sinister corporation as the chief villain of the show (even if Stanley Tucci’s CEO makes an improbable turnaround into a nice guy at the end of the film). Mark Wahlberg is painted as the Average American baseball-cap wearing guy trying to make a life for himself – we are meant to find his parental over-protectiveness something comical rather than controlling – and Bay clearly supports his homespun decency. Of course, we see with the film’s theme of resentment of distrust of corporate power and governmental intrusion (except for the benevolence of the Chinese regime), and the scenes with Mark Wahlberg driving people off his property by force that what Bay has retreated to is not so much ardent flag-waving but good old American Stand Your Ground defiance and individualism. (Oh wait a minute, a small voice in the back of your head pipes up, isn’t that the same sort of individualism that has had assholes like George Zimmerman and Cliven Bundy claimed as American heroes in the recent while?)

Michael Bay and Mark Wahlberg next returned with Transformers: The Last Knight (2017). Bumblebee (2018) was a spinoff where Michael Bay steps back to a producer position.