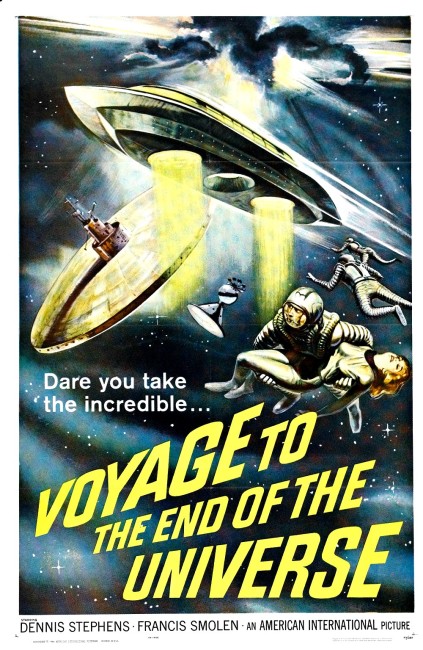 The spaceship Ikarie XB-1 departs on a voyage to explore the Green Planet that has been detected at the other end of the universe. The crew try to find various means to while away the boredom during the lengthy journey. They encounter another ship adrift, only to board and find all of its crew dead. Passing nearby a nebula, the ship becomes infected by radiation that makes everybody become sleepy. Two crewmen that were outside at the time are fatally affected by the radiation and one goes crazy, threatening the rest of the crew with a raygun.

This Czech-made film was one of a host of science-fiction films that came out from behind the Iron Curtain during the 1960s, all dealing with space exploration. Others included the likes of First Spaceship on Venus (1959), The Heavens Call (1959), Storm Planet (1962), Andromeda Nebula (1967) and Moscow-Cassiopeia (1973). As opposed to most American science-fiction films around the same era, the Soviet films seem unconcerned with the dangers of the rest of the universe – the Soviets never made any alien invasion films, for instance, and there are no atomic monsters in their films; at most, many of these have a minor comment about alien civilisations having been destroyed by nuclear war. Most of these Soviet science-fiction films were brought up by Roger Corman and AIP and re-edited into titles like Battle Beyond the Sun (1963), Voyage to the Prehistoric Planet (1965), Queen of Blood (1966) and Voyage to the Planet of Prehistoric Women (1968).

Ikarie XB-1/Voyage to the End of the Universe has a reasonable reputation in science-fiction circles. In reality though, it is better off viewed as an historical curiosity rather than one that necessarily makes for good dramatic science-fiction. The script does boast some modestly effective science-fiction – there is a surprising inclusion of the relativistic effects of near-light travel and the consequences this must have to those back on Earth – although later there is nonsensical talk about how “the radiation is interfering with the mechanical processes in our bodies.”

The principal complaint might be that Ikarie XB-1/Voyage to the End of the Universe is on the dull side. The main problem that the film has is that in opting for the kitchen sink depiction of the day-to-day life of a space mission that not very much happens throughout. We sit around watching people tending instruments, sunbathing in the solarium and conducting tentative romances. The stolidity of the action is not exactly helped by the typical cast of a Soviet science-fiction film, where astronauts seem to be cast as either stodgy middle-aged scientists or young bronzed, buffed Olympic athletes. When John Carpenter satirised the boredom of deep space missions in Dark Star (1974), you cannot help but think that he was influenced by Ikarie XB-1/Voyage to the End of the Universe.

The best scenes are the ones venturing to explore The Typhoon, which are shot with dim lighting and akilter camerawork that evokes a certain edgy suspense. There is an eerily atonal score that sounds like Louis and Bebe Barron of Forbidden Planet (1956) fame having gone avant garde. There are also some imaginative sets. On the minus side, while the abovementioned Soviet science-fiction films have the virtue of some excellent effects that stood them head and shoulders above their American counterparts (one of the reasons they were brought up and reedited by Roger Corman), the ones here are less so. There is a particularly clunky and ridiculous looking robot.

The version of Ikarie XB-1 seen in English-speaking countries today is Voyage to the End of the Universe, the version that was recut by AIP for English-language audiences and released in 1964. This removes a number of scenes from the original – cutting the running time of the original from 81 to 65 minutes. The missing scenes purportedly feature more scenes aboard the deserted ship, showing that its crew came from a world that had destroyed itself in a nuclear war.

The US version does have one addition that comes when the expedition arrives at the Green Planet at the end and we see a shot of the Statue of Liberty. This is a twist ending that was subsequently borrowed by other science-fiction films like Planet of the Vampires (1965) and most famously Planet of the Apes (1968). In the original Czech version of the film, the Green Planet was simply an alien world that the astronauts were travelling to away from Earth but here the path of their journey has been reversed. This is further confused in the US version of the film, which dubs all the characters with English names.