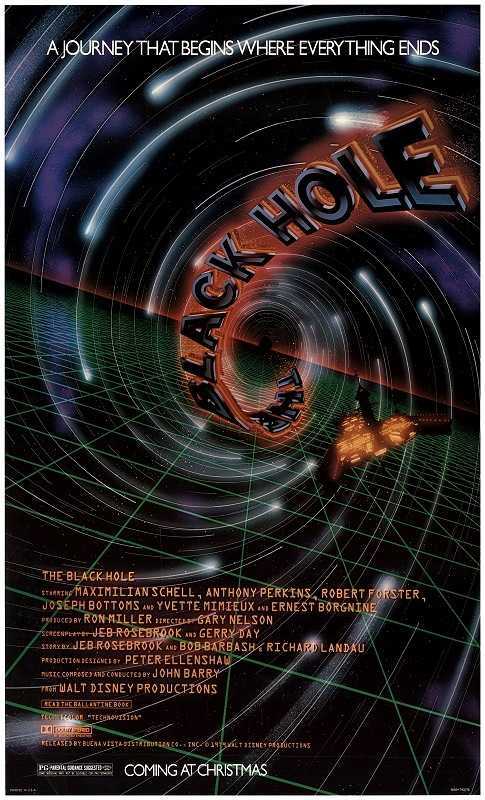 The crew of the deep space exploration vessel Palomino discover the lost spaceship Cygnus in orbit around a black hole. Boarding, they meet its captain, the visionary Dr Hans Reinhart, who shows them the many scientific marvels he has created, including a robot army. Reinhart invites them to join him as he prepares to journey through the black hole. However, as the Palomino crew explore the Cygnus, they discover that Reinhart has transformed his own crew into robots after they mutinied against him.

The Black Hole arrived with a then-sizeable $17 million budget and a publicity campaign that announced that it was Disney’s first adult film (it received a PG rating). It was Disney exploiting the Star Wars (1977) science-fiction boom and promising metaphysical profundity on the level of a 2001: A Space Odyssey (1968).

The film was several years in the planning. The script went through numerous rewrites and several directors, including John Hough, who was beind the Witch Mountain films, before deciding on Gary Nelson. The film was made with great fanfare – Disney even designed a special computerised system to allow the creation of three-dimensional mattes.

However, when The Black Hole arrived however, the results were monumentally underwhelming and the film – at least in terms of what it promised and what it delivered – was one of the biggest flops of the post-Star Wars boom. Instead of a film that promised the cerebral dazzle of a 2001, what we received was a deadening attempt to relocate Disney’s 20,000 Leagues Under the Sea (1954) in space – with cute robots and a good many explosions and raygun shootouts photocopied wholesale from Star Wars.

The Black Hole is a poor film in almost all regards. Cliches proliferate throughout. The characters are one-dimensional and the cast seem awkward and ill at ease. The most disastrous piece of miscasting is Ernest Borgnine who is allowed to do his soft-headed, bug-eyed thing as a cowardly journalist, a profession and disposition where Borgnine does not for the slightest moment convince.

Although, the worst aspect about the entire film are surely the robots. These are designed with a ludicrously cartoonish anthropomorphism – the good guy robots have goofy cartoon eyes plastered over their casing and are voiced by the uncredited but distinctive cowboy twang of Slim Pickens and the wheedling voice of Roddy McDowall. Someone somewhere seems to have viewed the robots as being on the level of dogs, casting them as either adorably cute and cuddly or else as bullying hulks.

Ever since 2001, the science-fiction film has been plagued by an increasing desire for weighty, meaningful significance and The Black Hole represents this at its most ponderous and religiose. The film’s conceptual failure is that it tries to imagine a grandiose concept – that of a black hole – but only ends up relaying these ideas in terms of ridiculous Baptist imagery.

What is in store is crudely spelt out from the discovery of the black hole with the cast uttering such heavy-handed lines as “It’s just like something out of Dante’s Inferno,” or “I keep expecting to see some guy in red with horns and a pitchfork.” Even so, the ending where everybody descends into the titular gravitational mass and Maximilian Schell and his chief bully robot are fused together and end up in Hell, while the good guys and good robots pass through a Heavenly corridor of stained glass windows and ethereal angelic forms, is laughable.

For all that, The Black Hole is not an entirely bad film. On a strict level of comparison, it is no better and no worse than most other science-fiction films of the post-Star Wars boom. It makes some token attempts at scientific accuracy – it does depict zero gravity and throws in a few mentions of event horizons and the like – although it is clearly just double-talk that the cast parrot boilerface without any understanding of what it means.

Many people at the time slammed The Black Hole for its scientific errors, chief among these being that the black hole was not black but red and blue. However, such is an accusation that science has amusingly proven to be correct – well before it crosses the event horizon, matter falling into black holes is crushed into particulate elements and such would then be released as energy, which would be radiated out across the visible light spectrum.

However, in terms of being the first film to deal with its title concept – although black holes had turned up earlier in The Three Doctors (1972) episode of Doctor Who and the Black Sun (1975) episode of Space: 1999 and had been used as an earlier explain-all in The Giant Spider Invasion (1975) – The Black Hole is wholly underwhelming. A film that could have dealt with some of the concepts of time dilation and suspension, of rotating black holes and singularity nodes that make scientific textbooks far wilder than the realms of science-fiction, would have been truly fascinating.

The one area the film does succeed in is the realm of special effects and sets. The Cygnus is like no spaceship that has ever graced the screen before – designed like some giant black wrought-iron skeleton of a Victorian exhibition hall taken to flight. The beginning tour of the ship where it suddenly comes to life, lit up from inside, is stunning.

The sets – where matte work has been used to enhance existing sets, allowing the creation of giant hallways and control rooms and corridors of geometric grillwork that fade off into a perspective that no soundstage could ever hold – is magnificent. Also worthy of mention is John Barry’s marvellously moody score that complements the film’s dark visual tone surprisingly well.

In 2009, Joseph Kosinski, who directed another in the spate of Disney revivals with Tron Legacy (2010), announced that he would be conducting a remake (or at least reaimagining) of the film, although nothing further has emerged from this yet.

Director Gary Nelson had previously directed the original version of the mother-daughter bodyswap comedy Freaky Friday (1976) for Disney and would go on within the genre to make the awful adventure film Allan Quatermain and the Lost City of Gold (1986) for Golan-Globus. Most of Gary Nelson’s other work has been in television.