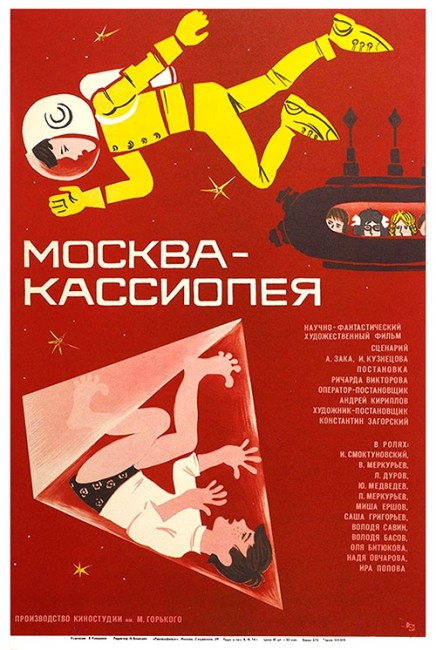 Teenager Viktor Sereda gives an inspiring speech in school about how they should build a faster-than-light spaceship to travel to Alpha-Cassiopeia to investigate radio signals indicating there is intelligent life there. He also suggests that they crew the ship with 14-15 year olds because the relativistic effects of time travel will mean that 52 years will pass during the journey. Viktor’s ideas inspire the academics. Aided by the mysterious A.S.A., Viktor succeeds in persuading them to build the ship Dawn. A crew of three boys and three girls are chosen to be captained by Viktor. The Dawn is launched but then they discover that Fedya Lobanov, an inventor of wacky devices, has also smuggled aboard.

Moscow-Cassiopeia was one of a number of science-fiction films made during the Soviet era. A number of science-fiction films emerged during this period, mostly from the USSR and principally on the topic of space exploration with the likes of Aelita (1924), First Spaceship on Venus (1959), The Heavens Call (1959), Storm Planet (1962), Ikarie Xb-1/Voyage to the End of the Universe (1963), Andromeda Nebula (1967), Solaris (1972), Test Pilot Perx (1979) and Moon Rainbow (1983), among others. Other genre films were made beyond the 1970s but tend to leave behind matters of space exploration as interest in the Space Race decreased.

Moscow-Cassiopeia was the first in an ambitious two-part space exploration film and was followed one year later with Teenagers in Space (1974), which deals with what happens once the expedition lands on Cassiopeia. The majority of the aforementioned Soviet space exploration films are stodgy. Unlike Western space films, they are not driven by drama but tend to be message-heavy films about exploring the universe and carrying the People’s Revolution to the stars. There are no Soviet equivalents of the things that preoccupied 1950s US science-fiction – imminent alien invasion or atomically-created monsters wreaking havoc on society. If nothing else, the Soviet films, being state funded rather than produced mostly by B-budgeted production companies, have infinitely superior special effects to their American counterparts.

Most of these films featured resolute heroes who seem carved out of bronze and without much expression and women that seem demure and subservient, while everybody is a noble embodiment of the social revolution without any character depths. This was the case in all the Soviet SF films at least up until around the time of Solaris. You could compare Moscow-Cassiopeia to Ikarie Xb-1, which similarly consisted of a lengthy and rather dull mission to another planet. About half of Moscow-Cassiopeia is the same with the earlier sections being taken up by the recruitment and preparations for the mission. Moscow-Cassiopeia largely gets around the problem of this by turning everything into a children’s (or at least young adults) film. The usual stodginess of the characters is undercut by comedy scenes or a running subplot about Misha Yershov trying to find who left him the note in school.

The space journey is imaginatively handled and well above average. The film spends the time making the technology of the spaceflight seem plausible. The engineering looks convincing, there is attention paid to depicting the effects of zero gravity aboard the ship and the use of magnetic boots to counter this. You can pick some of the technical accuracy apart but this is certainly more than you would ever get in almost any American science-fiction film around this period. The effects are reasonably good for what can be expected for the era. The film interestingly introduces a prototypic version of what Star Trek: The Next Generation (1987-94) would call the holodeck over a decade later, although the type of technology being used is never specified.

The great problems of most of these Soviet space travel films is their lack of dramatic interest. Nothing much seems to happen on the journey there – the characters are not delineated with enough depth to create any internal conflicts, while the films seem to eschew much in the way of big drama. Volodya Basov’s Fedya seems to have been construed as a comic foil along for the journey – he seems to have no other characterisation than to constantly touch things that he shouldn’t and cause general chaos. There are some silly scenes fooling around in zero g and running around fighting with swords (all played over with jaunty carnival music). While the film seems convincingly credible in other respects, you have to question the sanity of including a rec room on a spaceship of teenage kids that has a full armoury of swords and other mediaeval weapons.

One of the more unusual aspects of the film is the prologue where Innokenty Smoktunovsky introduces the film, while also telling us that he appears as one of the characters later on in the show. Amusingly, the scriptwriters appeared to have borrowed a few leaves from the credits in US films and have him talking about “coincidence to persons living and dead being purely coincidental”. Later Smoktunovsky turns up as the character A.S.A whose seemingly magical presence in the film – he instantly outfitting Misha Yershov and Sasha Grigoryev with the suits for their interview with the academy and having knowledge of the future, as well as being able to appear aboard the spaceship – is never adequately explained. Possibly this is something that was left for the sequel.