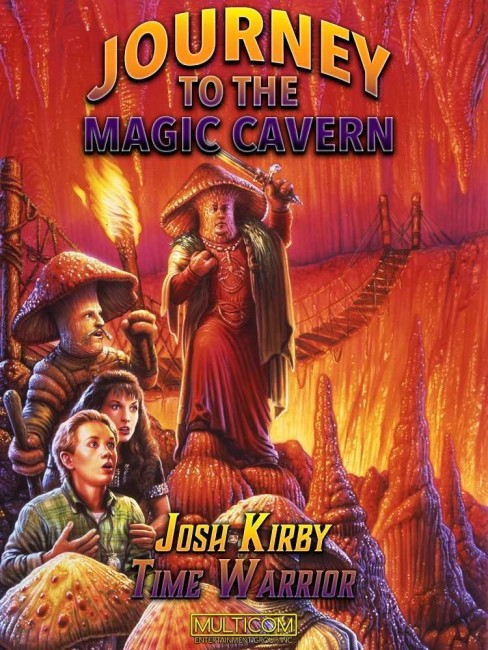 In their race through time and space to get the components of the Nullifier before the evil Dr Zoetrope, teenager Josh Kirby, the scientist Irwin 1138 and the warrior girl Azabeth Siege have landed on a planet where Azabeth has taken a bite from a poisonous mushroom. They are taken before Lord Truffle, the ruler of the mushroom or Shroom people, who determines that Azabeth’s only hope is to find the Shroom known as Puff Ball. Azabeth is given a magical beetroot that temporarily restores her strength and they set out on a peril-laden quest to the Dream Cavern where Puff Ball has gone missing. Once there they must deal with the intergalactic circus owner Colonel Beauregard T. Damon who wants to capture the Shrooms and turn them into his exhibits.

Journey to the Magic Cavern was the fifth of Full Moon’s Josh Kirby … Time Warrior! films. The previous films – at least the preceding two – attained a likeable sense of juvenile adventure, making a charm of their low budgets.

This effort tries to rely more on a classical adventure story to carry it and as a result the threadbareness of the production values tend to show through. Colonel Damon’s Intergalactic Circus is only represented by a tent interior and several cages, for instance. The arrival at the centre of the Shroom world, which is supposed to come with its own interior sun, is never depicted. The various action set-pieces – with the heroes trapped in quicksand, attack by glowing bees and the encounter with the highly unconvincing robot Muncher – fail through an inability to overcome the tattiness of the effects.

Mostly the film passes likeably enough. The mushroom people with their exaggerated Italian and Japanese accents are a genuinely surreal sight – at one point, one Shroom even breaks into Italian opera. (You can almost guarantee that screenwriters Ethan Reiff and Cyrus Voris have partaken in illicit mind-expanding substances at some point – the term Shroom is common jargon for Magic Mushrooms).

The cod-Von Danikenean scene where the story of how the Furry Ones came to give the universe linear time and create the Nullifier, all interpreted from a few pictures drawn on a wall, is unintentionally amusing. The ending of the film offers a surprise reversal of the villain and the scientist and is an unusual twist on everything the rest of the series has led up to.