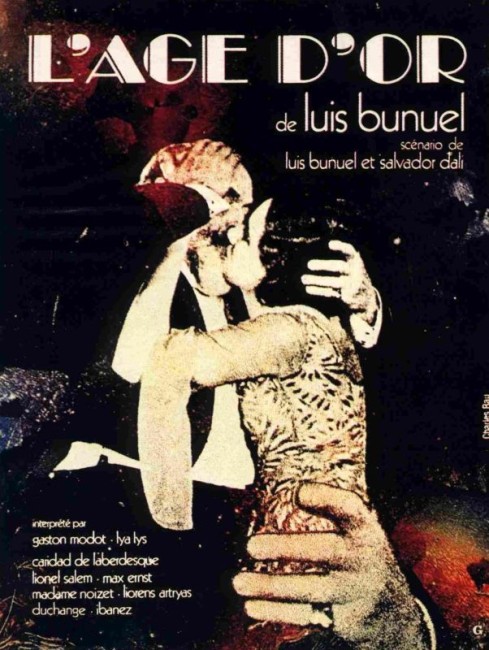 (The Age of Gold)

L’Age d’Or was one of the early films from the great cinematic iconoclast Luis Buñuel (1900-83). Buñuel has become regarded as one of the modern cinematic surrealists and is a revered director in at least film society circles. Buñuel was born in Spain and gained his fame in France in the 1920s and 30s. His career moved around various parts of the world – a brief spell in the US, his growth as a filmmaker after moving to Mexico in the 1940s, the beginning of his acclaim with the controversial Viridinia (1961) made back in Spain and his return to France in the 1960s where he went on to make the bulk of the films that he is celebrated for today – Belle de Jour (1967), The Discreet Charm of the Bourgeoisie (1972), The Phantom of Liberty (1974) and That Obscure Object of Desire (1977).

Buñuel had become friends with the famed surrealist artist Salvador Dali while both were students living in the same dormitory while attending the University of Madrid in the early 1920s. Both moved to Paris where they collaborated on the sixteen-minute short film Un Chien Andalou (1928), which became a sensation among the Parisian artistic elite. Buñuel and Dali were then approached by the wealthy Vicomte Charles de Noailles and offered financing to make another film. Every year, Vicomte de Noailles would present his wife the Vicomtesse Marie-Laure with a film he had commissioned for her birthday. The result was the 63-minute L’Age d’Or. Alas Buñuel and Dali had a great many differences of ideas during the filming and Dali departed, leaving Buñuel to complete L’Age d’Or on his own. The two parted ways as friends not long after when Buñuel tried to strangle Dali’s later wife-to-be Gala.

L’Age d’Or is not a film that was widely seen for a number of years. The reasons behind this are complicated. During its original screenings at a Parisian art museum, the film was moralistically condemned in local newspapers and Buñuel and Dali accused of being Communists. One screening was taken over by members of the fascist League of Patriots and Anti-Semitic League who hurled purple ink at the screen and then vandalised the adjoining art gallery, destroying a number of valuable paintings. The Catholic de Noailles were then threatened with excommunication by The Vatican because of the film’s blasphemous final scene. As a result, they made the decision in 1934 to withdraw prints of the film from circulation. L’Age d’Or was not seen again until 1979 after the deaths of the de Noailles. Even so, it is not a film that is widely circulated and has crept only out onto video/dvd in recent years.

Un Chien Andalou was essentially only a series of random surrealistic images but by the time of L’Age d’Or Luis Buñuel connects them together with a tenuous plot of sorts. It is not a particularly clear plot and one where Buñuel keeps sidetracking off into other things along the way. Largely through, L’Age d’Or is (like Chien Andalou) a progression of surrealistic, non-sequitir gags. In the opening moments, a couple (Gaston Modot and Lya Lys) roll about in an amorous embrace on a beach but are interrupted by a group of dignitaries who have set out to found Rome and place the foundation stone on the spot where the lovers were tumbling. (The lovers will be seen throughout trying to reconnect with one another but constantly being thwarted with comic effect).

We progress through a variety of surreal and outrageous vignettes:– four bishops sit to pray on some rocks and then dissolve into skeletons; a cow stands on a bed; a woman sitting on a toilet is juxtaposed with a pool of bubbling mud; the hero (the same man who has been named the goodwill ambassador for his country) stops to help a blind man but kicks him, crushes a violin underfoot on the pavement, punches his girlfriend’s mother in the face, stomps on a beetle, kicks a dog and then shoots his son for stealing something; a priest, a flaming tree and a giraffe are thrown out a window; and a horse-drawn cart passes through a respectable dinner party.

A constant theme throughout Luis Buñuel’s work is his anger against the Catholic Church and in his films, in particular Viridinia, he took great delight in mocking the Church. What led to L’Age d’Or‘s condemnation by the Church was the scene near the end where an orgy takes place in a villa – one that has clearly been modelled on the Marquis de Sade’s 120 Days of Sodom (1785/1935), a clear in-reference in that at the time the de Noailles family owned the original manuscript of de Sade’s work of extreme perversion and would bring it out to show and shock guests – and where the party of revellers that eventually emerge is revealed to contain a Jesus Chris lookalike.

The outrage and fallout over L’Age d’Or was subsequently depicted in the animated biopic Buñuel in the Labyrinth of the Turtles (2018).

Luis Buñuel’s other films of fantastic note are:– the surrealist short Un Chien Andalou (1928); The Exterminating Angel (1962) about a group of people unable to leave a room; Simon of the Desert (1965) about a virtuous man being tempted by The Devil; The Discreet Charm of the Bourgeoisie (1972) a surrealist film about a group of people trying to go to dinner; and The Phantom of Liberty (1974), which contains a series of surrealistic vignettes. Buñuel also wrote the silent French Edgar Allan Poe adaptation The Fall of the House of Usher (1928) and The Monk (1972), an adaptation of the classic work about The Devil tempting a monk and drawing him down into depravity.