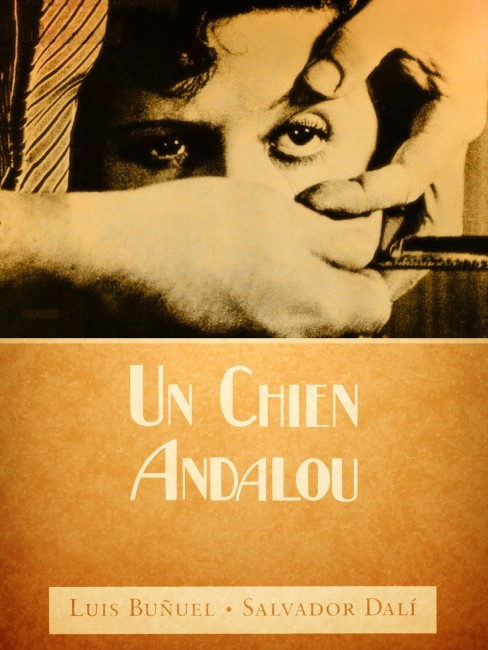 This sixteen-minute short is one of the earliest films from Luis Buñuel, which he made in collaboration with the later-to-be-famous surrealist artist Salvador Dali. In his later films, Buñuel became a mud-slinging iconoclast, perpetually throwing barbs up against the Catholic Church and social hypocrisy.

All of Luis Buñuel’s trademark outrages are already in place here in Un Chien Andalou. He likes to play shock theatrics – there is the famous closeup on the slashing of an eyeball with a razor, which surely makes Un Chien Andalou the first splatter film, and other images such as ants crawling through a hole in a man’s hand and children playing with dismembered hands in the streets.

Buñuel and Salvador Dali intended Un Chien Andalou to work on a sense of dream logic – cuts between the sliced eyeball and clouds crossing the moon, or between books and revolvers. The film is full of these wild, occasionally interesting images – a character drags a grand piano behind him with dead animals strung across it, which keep turning into the bodies of priests.

At other times, the symbolism proves crude – in one scene, the nominal hero starts fondling the heroine’s clothed breasts and Buñuel suddenly cuts to the fondling minus her clothes. These non-sequiturs have no narrative or cohesion – the title (which translates as An Andalusian Dog) has no reference in the film, for instance – which can either be frustrating or brilliant depending on one’s tolerance for surrealism. Personally, I find Luis Buñuel one of the more overrated directors.

Luis Buñuel’s other films of fantastic note are:– a further surrealist collaboration with Salvador Dali, L’Age d’Or (1930); The Exterminating Angel (1962) about a group of people unable to leave a room; Simon of the Desert (1965) about a virtuous man being tempted by The Devil; The Discreet Charm of the Bourgeoisie (1972) a surrealist film about a group of people trying to go to dinner; and The Phantom of Liberty (1974), which contains a series of surrealistic vignettes. Buñuel also wrote the silent French Edgar Allan Poe adaptation The Fall of the House of Usher (1928) and The Monk (1972), an adaptation of the classic work about The Devil tempting a monk and drawing him down into depravity.