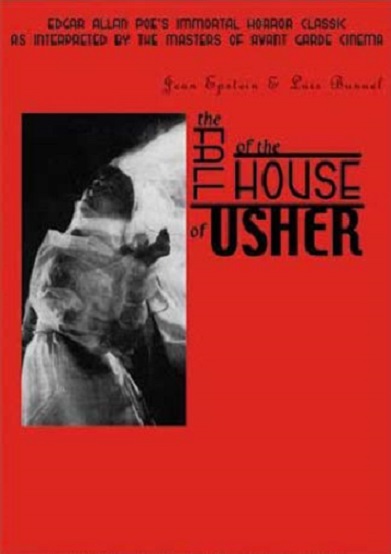 A man receives a request to come visit his old friend Roderick Usher. The locals in the village warn him away from the foreboding Usher house. Arriving at the house, the man finds Roderick fixated on painting a portrait of his wife Madeleine. As Roderick becomes more obsessed, believing he is putting her life into the canvas, Madeleine collapses dead. They place her body in the Usher crypt. However, Roderick, his sanity fraying, insists that Madeleine is not dead and will return to life.

This was one of two film versions of Edgar Allan Poe’s short story The Fall of the House of Usher (1839) that were released in 1928. (See below for the other film versions of The Fall of the House of Usher). Coming out the same year was also a twelve-minute long version made in England by directors James Sibbley Watson and Melville Webber, which stands at 180 degrees remove from this version and is a highly experimental work influenced by The Cabinet of Dr Caligari (1919) that treats the Poe story in a loose, abstract way. I have not been able to ascertain which of these were released first, making the two of them the first film versions of the Edgar Allan Poe tale, although there had already been more than twenty film versions of other Poe stories made throughout the silent era before this. (Jean Epstein also manages to do the intertext and in-reference thing way before it was trendy by sneaking in reference to another Edgar Allan Poe short story Ligeia (1838), showing during a glimpse of the crypt that Roderick Usher’s previous wife was named Ligeia).

Jean Epstein was a poet and critical theorist who turned filmmaker in 1922. Epstein made some thirty plus films during his career, although The Fall of the House of Usher is the most famous of the ones that exist today. Epstein’s assistant director and co-writer was none other than Luis Buñuel, the celebrated surrealist director of films like L’Age d’Or (1928), The Exterminating Angel (1962) and The Discreet Charm of the Bourgeoisie (1972), although Buñuel apparently parted ways with Epstein during the course of shooting over their differing interpretations of Poe.

Jean Epstein makes a number of changes to the Edgar Allan Poe short story. Roderick Usher now no longer suffers from his hyper-acuteness of senses, although this is vaguely alluded to later on in one intertitle card that says that “the slightest sound exacerbated him” where this is seen as a reaction to the trauma of Madeleine’s death. In its place (at least during the initial scenes), Roderick seems to have an unhealthy obsession with painting a portrait of Madeleine – where this becomes an odd mix of Poe’s themes combined with ideas from Oscar Wilde’s The Picture of Dorian Grey (1890) about the essence of a person being imbued into a portrait. Now Madeleine is killed when Roderick obsessively transfers too much of her lifeforce into the picture.

The most notable change is that Madeleine is Roderick Usher’s wife rather than his sister – the upshot of this is that we end up with a film that is less set amid an overwhelming sense of doom and gloom than a work about a husband who is simply obsessed with his dead wife. The mood of the story also seems far more melancholic than the utter desolation of the soul and sense of decay that comes across in Poe. (This is also incidentally the only version of The Fall of the House of Usher to intercut the narrator’s reading of the story of Ethelred the knight with Madeleine’s rising from the tomb as Poe has it).

Jean Epstein shoots some amazingly melancholic exteriors of the house and Usher estate. The grounds, filled with bare trees, water rippling on desolate and unwelcome lakes, the placid and unnaturally stilled surface of the lakeshore, the stone balustrades and pathways echo with a haunted sense of grey emptiness. (The melancholic atmosphere is superbly aided by the score composed by Ivan Fedele for the modern 1995 restoration print). There is a fine sequence following Madeleine’s funeral procession – where the cortege is first seen travelling down an avenue of trees, over which has strikingly been superimposed a series of candles, with the trail of her burial gown lying out of the coffin and drifting along behind them in the water as they cross the lake by boat to get to the crypt.

The interior of the House of Usher is all vast, empty sets – like a soundstage with giant high walls and random pieces of furniture placed in the middle of the bare space around which the action occurs. This makes great contrast to the ornate Gothicism and richness of Roger Corman’s The House of Usher (1960) and his subsequent Poe adaptations. The depiction of the exterior of the house is somewhat unwound by a model that looks only so-so convincing today, where Epstein at least tries to hide many of its shortcomings by covering the model set in mist.

Jean Epstein’s camera-work is often undeniably experimental – he does after all have the wife of France’s most avant garde silent director Abel Gance, best known for works of the silent era such as Entr’acte (1924), The Crazy Ray (1925) and The Imaginary Voyage (1925) and later Hollywood ventures such as The Ghost Goes West (1936) and I Married a Witch (1942), playing his Madeleine. The film is at its most experimental during the depiction of Roderick’s mental decay following Madeleine’s death, which comes emphasised by closeups of frogs, owls and cats, the ticking of a clock’s pendulum and cuts away to the interior of the clock, wavering double exposure shots and shots of guitar strings snapping.