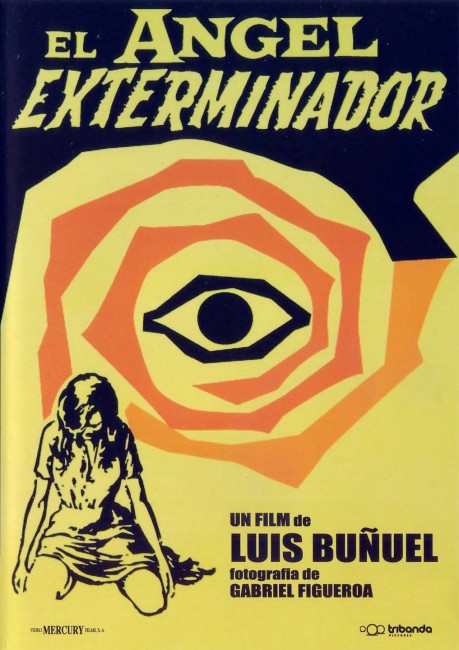 Guests attend an upper-class dinner party. After the party ends, people mill around instead of going home and eventually settle down and spend the night on chairs and couches. None think this particularly odd until the morning when they find that there appears to be some type of psychological barrier stopping them from leaving the room. As hours stretch into days, food becomes a major problem. Outside people observe the problem but there appears an equal psychological barrier preventing anybody from entering. As hunger comes to rule the trapped group, their tempers and sanity fray.

The Exterminating Angel is one of the classic surrealist films from director Luis Buñuel (1900-83). Buñuel had departed his native Spain following the Spanish Revolution, had lived variously in France, briefly in the USA and then went onto Mexico where he made The Exterminating Angel along with several other films, before returning to Spain in the 1960s. The films that Buñuel made during the 1960s are the point when his fame began to grow internationally.

The Exterminating Angel marks a return to the surrealistic films that Buñuel began his career with in the likes of his legendary shorts Un Chien Andalou (1928) and L’Age d’Or (1930). These were films that operate as a surrealistic progression of images, connected only by their juxtaposed outrageousness. In the three decades interim, Buñuel, through making various realist films, appears to have learned narrative technique and in The Exterminating Angel the surrealism comes at a higher conceptual level.

As in the later highly acclaimed The Discreet Charm of the Bourgeoisie (1972), Buñuel is mocking the mores of the upper classes – both The Exterminating Angel and Discreet Charm feature a group of upper-class diners whose lives are held in a perpetual state of suspension when dinner plans go bizarrely wrong.

Luis Buñuel essentially plays the scenario here as a jolly jape. The Exterminating Angel is a one-gag idea, not unlike a Eugene Ionescu or a Samuel Beckett one-act play. While amusing, the gag is never more than its solitary idea. Buñuel seems to lack the ability to let the central idea expand to anything more than that. He seems disinterested in the characters and rarely does anything to differentiate them one from another or spend any time concerning himself with their internal conflicts. He never does much to dramatically twist the situation either – the cast are not even reduced to barbarity, merely disheveledness. There is an amusingly sardonic epilogue where the group of people attend a church service but appear unwilling to leave after it ends, with the film fading out as another herd of sheep start wandering towards the church.

The Exterminating Angel is a likable joke but too much of the idea remains unfulfilled. The title, as one might note of almost all of Luis Buñuel’s films listed below, has nothing to do with anything in the film – there are no angels present and the situation at most is one of attrition rather than of extermination, least of which nobody is killed anyway.

The Exterminating Angel was spoofed in Woody Allen’s Midnight in Paris (2011), which has a time-travelling Owen Wilson meeting Luis Buñuel and giving him the idea for the film.

Luis Buñuel’s other films of fantastic note are:– his two surrealist short collaborations with Salvador Dali, Un Chien Andalou (1928) and L’Age d’Or (1930); Simon of the Desert (1965) about a virtuous man being tempted by The Devil; The Discreet Charm of the Bourgeoisie (1972); and The Phantom of Liberty (1974), which contains a series of surrealistic vignettes. Buñuel also wrote the silent French Edgar Allan Poe adaptation The Fall of the House of Usher (1928) and The Monk (1972), an adaptation of the classic work about The Devil tempting a monk and drawing him down into depravity.