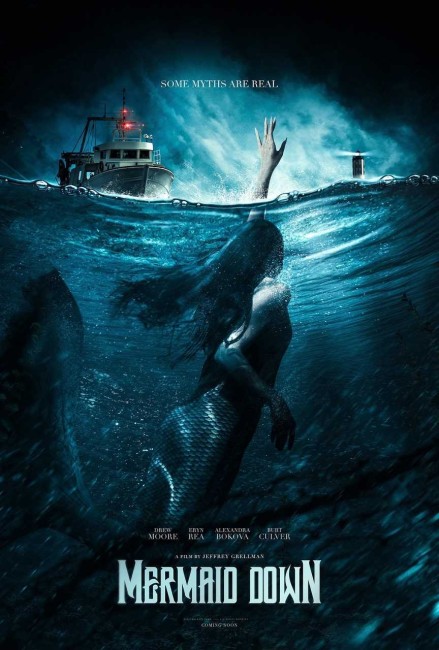 Two fishermen capture a mermaid in their net. As she tries to escape, one of the fishermen hacks off her tail with an axe. This is observed by the psychiatrist Dr Beyer on his nearby yacht. He swims aboard, kills the remaining fisherman and takes the mermaid. She is placed in the asylum for women that Beyer runs. There the unspeaking mermaid uses sign language to communicate who she is to the other girls and try to find a way of returning to the water before being away from it kills her.

Mermaid Down comes from Jeffrey Grellman, a Belgian national who moved to the US at a young age. Grellman has worked as an actor and then wrote, produced and acted in X Factor (2000) before making his directorial debut with Whiskey Blue (2000), both non-genre films.

Mermaid Down certainly sits in this latter category. If that wasn’t evident then surely the scene not far in where a screaming mermaid is captured in a net and then her tail bloodily hacked off by an axe would clinch it. (For an overview of the mermaid film see Films About Merpeople),

I wanted to like Mermaid Down. I thought the way the film was described – mermaid has her tail cut off and is placed in an asylum where she tries to convince the other patients of who she is – has a great deal of potential. However, Jeffrey Grellman’s directorial style is far too confusing at times. For one, the scenes set in the asylum are all shot in what looks like a regular house with the girls having been crowded into a room the size of a regular double bedroom with expectedly cluttered results; what the film needed was a facility with multiple rooms or at the least some type of dormitory setting.

There are certainly times where mermaid Alexandra Bokova’s attempts to communicate with the other girls comes with some affect. However, this is not a film that is shot in a way that illuminates the drama – Jeffrey Gellman obscures rather than brings it to life. There are side pieces that seem to make the narrative murky – you are not entirely sure what a scene about the journey down into the basement is all about. It is not clear for some time in that a girl who appears in transparency is meant to be a ghost. Psychiatrist Burt Culver’s actions – like the abrupt decisions to kill all the girls at the end – seem to operate in a complete motivational vacuum. You can’t help but feel that a film that had spent a little more time editing its script and expanded the sets out rather than filmed than in cramped, clustered quarters would have worked far better.