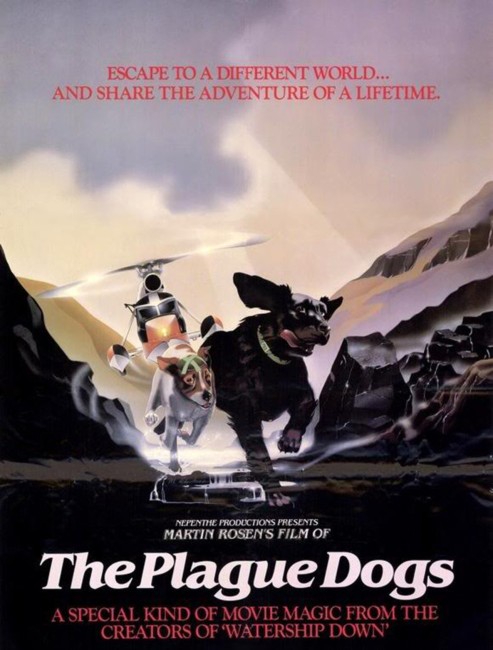 Snitter and Rowf are dogs being used as experimental subjects in the Lawson Park research facility. When a lab attendant leaves Rowf’s cage open, the two dogs manage to find their way out of the lab and to escape. They try to survive in the wilds of Britain’s Lake District but lack the necessary skills to do so. They are aided by a fox, The Tod. After they kill sheep to eat and Snitter accidentally causes the death of one farmer, this provokes the locals to hunt them down. The scientists at Lawson Park claim that the dogs are infected with bubonic plague and so the military are called in.

British author Richard Adams (1920-2016) had huge success with his novel Watership Down (1972), which detailed the lives of a group of rabbits as they tried to make sense and mythologise the human world they journeyed through. The novel was filmed as Watership Down (1978) by British animator Martin Rosen, whose only other notable screen credit had been as producer of Ken Russell’s Women in Love (1970). Rosen’s Watership Down film was a big international success.

For his second directorial outing, Rosen embarked on this adaptation of Richard Adams’ The Plague Dogs (1977). Sadly for Rosen, The Plague Dogs was little seen outside of the UK, received sporadic distribution on video and has been largely unheard of by most of the world up until its dvd release in the 00s. Equally sadly, the failure of The Plague Dogs proved to be the kiss of death for Martin Rosen’s career. Rosen made only one other film, the live-action Stacking (1987), a positive feelgood family drama set in rural Montana, which did even less box-office, and he has since disappeared, apart from appearing as an executive producer on the short-lived Watership Down (1999) tv series and the BBC tv mini-series remake Watership Down (2018).

It is a great shame that Martin Rosen has vanished as a cinematic voice, for the two animated films that he has left behind – Watership Down and The Plague Dogs – are both unsung masterpieces, the latter especially so. One might even go so far as to say that Martin Rosen’s films can sit up alongside the very best of Hayao Miyazaki. In his ability to interpret the human world through the eyes of animals, Rosen’s work has a mythological depth that Miyazaki’s films do not. There is something immensely charming to the scenes of the dogs trying to survive in the outside world – “Ooooh they’re clever – they’ve made it too cold for us to live,” says Snitter upon encountering the snow for the first time.

Martin Rosen’s animated films touch upon an amazing sense of darkness. He sets the scene here beautifully during the opening moments at the research laboratory – with Rowf being drowned and then dragged out of the pool just before he expires and the two dogs wandering through the laboratory wondering “There must be some reason, mustn’t there? It must do some good.” The voicing of the dogs is superb – Christopher Benjamin as the world-weary Rowf and the unmistakeable tones of John Hurt as the fearful Snitter. There is an extraordinary sense of looming menace created during the dogs venture into the incinerator – we know what such means and this gives their curiousness about the smell of death, or Rowf just wanting to lie down and rest a haunting potency. (Not the mention, the resonance such a scene has of the gas chambers of The Holocaust). Humans are rarely seen and almost always come as detached voices heard from off-screen.

Rosen is not afraid to be dark and adult when it comes to the emotions engendered. In Watership Down there was the ever-present fear of predators, while here Rosen realistically shows the dogs in their natural state driven by constant hunger and the need to hunt. The middle of the film shows them killing sheep and later chickens, while there is a scene where a human hunter is killed with a shotgun. Rosen includes images that cut from the hungry animals to a trail of blood running into a stream and then shows a desiccated sheep carcass – something that you can guarantee any custie Disney talking animals film would have shied away from showing.

The most shocking scene is where the two hungry dogs come upon the body of the hunter who has been accidentally killed and the two of them look at one another before the scene fades out with the clear implication left that they are going to feast upon the dead body. One is amazed that Rosen is prepared to go that far in an animated film that is ostensibly for children and family audiences. (This scene was cut from many prints). It is no particular surprise that The Plague Dogs suffered from distribution problems the world over as a result. It is almost as though Martin Rosen had decided he wanted to make an animated talking animals film for adults rather than children.

There is an exquisite degree of detail to the animation – beautiful shots like Rosen simply panning along the side of a chain link fence and watching the patterns of water dripping off. (One must remember that The Plague Dogs was made before there was any such thing as the notion of CGI animation). The depth of emotions that Martin Rosen creates is extraordinary – the heart-rending moment where Snitter thinks he has killed the hunter or the amazingly sadness of the scene where The Tod is killed by the other dogs.

The most emotional and heart-wrenching scenes come at the end of the film. [SPOILERS ALERT]. Here the dogs are pursued to the beach by the soldiers and swim out into the water as their only means of escape, where Snitter insists there is an island ahead but Rowf cannot be sure if that is not one of Snitter’s brain-damaged illusions and the film fades out as the two keep on going towards the island that may or not be there. This is notably downbeat in contrast to the way that Richard Adams’s book ends, where the dogs survive and are eventually cleared of the charge of having the plague. It is one of the most heart-wrenching endings put on film, right up there with the death of the mother in Bambi (1942).

The Plague Dogs is well overdue being re-evaluated as an animated classic. There are also some surprising names on the credits, including Brad Bird, later the director of The Iron Giant (1999), The Incredibles (2004) and Ratatouille (2007), as an animator. There are other surprising names among the voice cast, including a then-unknown Patrick Stewart as an army major.