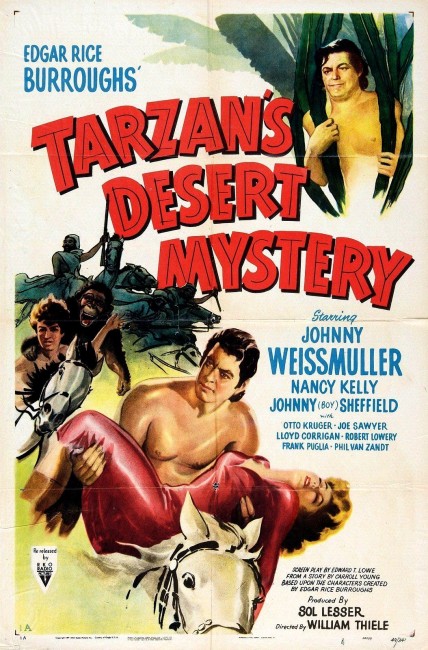 Tarzan receives a letter from Jane who is away aiding the War Effort in North Africa, asking him to come to her with vitally needed medicines. However, Boy deliberately alters his reading out to Tarzan of what Jane says in the letter so that he and Cheeta can come too. On the journey through the desert, they meet travelling magician Connie Bryce. In Biaherari, where the ruthless Paul Hendricks has the ear of the good-natured Sheik, Tarzan is arrested as a horse thief and Connie sentenced to death for the murder of the prince heir.

Tarzan’s Desert Mystery was the eighth of the Johnny Weissmuller Tarzan films, the second made after the series moved base to RKO Radio Pictures. (See below for the other Johnny Weissmuller Tarzan films). By now, a decade after the start of the series, and at the rate of about one Tarzan film a year for most of the 1940s, the Tarzan films were starting to seem tired. There were only so many variants that could be conducted on lost city/lost treasure/elephant’s graveyard and Tarzan vs trappers/treasure hunters/evil native tribes plots that could be conducted. As with the previous year’s entry Tarzan’s New York Adventure (1942), it seemed that the series was starting to vary the locations simply in order to provide some novelty.

The series was also lacking the presence of Maureen O’Sullivan’s Jane, O’Sullivan having departed the series after Tarzan’s New York Adventure out of a desire to settle down and raise a family. Due to the public furore that erupted when the producers tried to kill Jane off at the end of Tarzan Finds a Son (1939), the role of Jane was simply written out of the series rather than the part recast. The film now maintains the fiction that Jane is still there – this time she is absent from the story because she is acting as a nurse for the war cause in North Africa (which provides the film’s raison d’etre).

Subsequent to O’Sullivan’s departure, rather than giving Tarzan romantic liaisons, the Johnny Weissmuller films tended to cast other actresses as Jane substitutes – Nancy Kelly’s Connie Bryce here is one of the more successful, with Kelly – later an Oscar nominee for The Bad Seed (1956) – giving an amusingly peppery performance. Johnny Sheffield’s Boy is still present and the film retains the same absurd nuclear family substitute as when Maureen O’Sullivan was present with Boy at one point asking Nancy Kelly to act as substitute mother and say his prayers “just like Jane did.”

Like all but the first two Johnny Weissmuller films, Tarzan’s Desert Mystery is routine. The plot is a dull affair. All the Arabic characters tend to be characterised as either swarthy or buffoons. The dialogue is frequently bizarrely purple: “Oh brother, do you give the King’s English the St Vitus Dance,” says Nancy Kelly upon encountering Tarzan’s Pidgin English. The plot can hardly be called believable – at one point, Tarzan and Boy’s escape plan involves getting Cheeta to steal turbans all over the city in order to make a rope to climb down from the tower where they are imprisoned. (It is a sequence that pointedly does not seem to know the difference between a turban and a burnoose).

Even more so than before, cute Cheeta antics are pushed to the foreground with extended sequences like the turban theft and another where Nancy Kelly ropes Cheeta into doing circus acrobatics before a gathered bazaar crowd. There is an overtly fantastique element here more so than in previous entries with a chase sequence during the last ten minutes involving encounters with optically enlarged lizards, giant spiders and people-devouring flytraps.