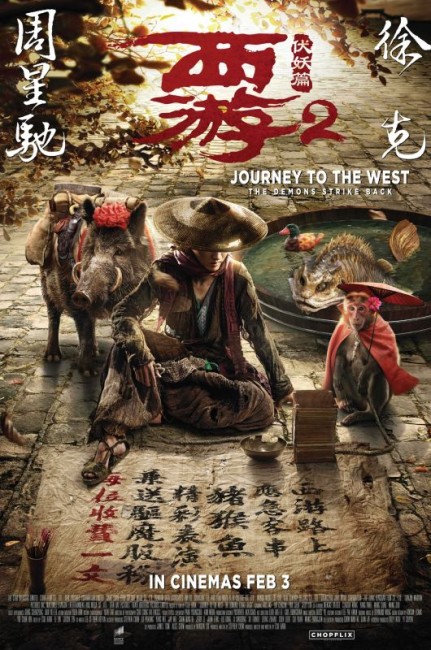 aka Journey to the West: The Demons Strike Back

Monk Tang continues his journey to the West, accompanied by The Monkey King, Pigsy and Sandy. In between fighting demons, they are forced to perform in towns in order to earn provisions for the journey. Monk Tang is finding the Monkey King increasingly more difficult to control. They come to the city of Bi Qui ruled over by a child king who petulantly demands that everything be arranged for his entertainment. They are banished after Monkey’s mischievous exploits go awry but Monkey sees that the king is really a demon and insistently returns to fight him. In reward for combating the demon, the real king gives Monk Tang the concubine Felicity as his companion. Monk Tang sees his lost love Duan in her, but Monkey insists that she is a demon despite all evidence otherwise.

Journey to the West: Conquering the Demons (2013) was a reasonable hit for Stephen Chow. An adaptation of the 16th Century Chinese legend Journey to the West, which has been filmed multiple times – see below – Chow spun the story through his usual bent for frenetic slapstick comedy. This is a field in which Chow had proven himself a comic genius in the past with films that he has directed/starred in such as From Beijing with Love (1994), Forbidden City Cop (1996), Shaolin Soccer (2001) and Kung Fu Hustle (2004). On the other hand, Conquering the Demons failed to work with the inspiration that Chow’s earlier films did – it can be seen that his work of the 2010s, at the same time as his work rises to all-time popularity at the Chinese box-office, has become bloated and not that funny.

Journey to the West: Demon Chapter is a sequel. While Conquering the Demons acted as a prelude to the saga, this brings the series more in line with the traditional adventures in Journey to the West. Here Stephen Chow has stepped back from directing, although co-writes the script and produces.

Chow has given the directorial chair to Tsui Hark, one of the legends of Hong Kong cinema. Tsui essentially created the flying swordsman genre with Zu: Warriors from the Magic Mountain (1983) and has directed and produced numerous other works (see below). It is a surprise that Tsui and Chow have not worked together before, although Tsui did make a cameo acting appearance in Chow’s last directed film The Mermaid (2016).

Tsui Hark and Stephen Chow make for an uneasy mix. Tsui delivers one of his usual films, filled with wildly over-the-top fantastique moves. There are some eye-catching sequences – a battle between the party and a household of women transformed into spider beings; the slapstick nonsense around the throne room of Bi Qui, climaxing in a battle with a series of sinister clockwork creations that look like they have stepped out of a Tim Burton film and a sky filled with hundreds of flaming horses alongside a palace that is torn out of the ground and levitated up into the air. The film reaches an especially epical climactic battle with the Monkey King transformed into a giant ape made of rock that is cracked open to reveal veins of lava inside, fighting off the Golden Vulture and tearing mountains up from the ground as multiple Buddhas appear, creating massive tidal waves.

On the other hand, while this results in a much more fantastical film that Conquering the Demons, having to take on board Stephen Chow’s slapstick tone makes for a very silly Tsui Hark film. Chow’s brand of comedy that plays on frenetic slapstick and simple-minded caricatures (not to mention poking laughter at fat and ugly people) is not something you ever find in any of Tsui’s other films. The plot is also on the episodic side. Moreover, the film suffers from the problems that beset much modern Chinese-made fantasy and that is that an incredible amount of money is lavished on the sets and costuming but the CGI effects look very obviously like CGI effects.