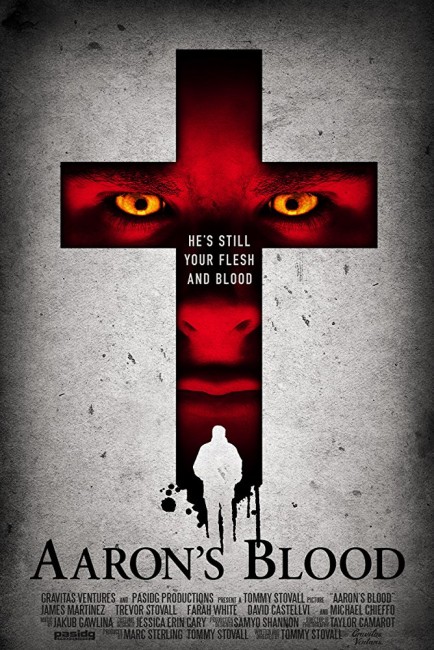 In Arizona, Aaron Diaz is trying to raise his twelve-year-old son Tate after the death of his wife in an accident a year ago. Tate is a haemophiliac. After a bullying incident at school, Tate is rushed to hospital with a nosebleed. As Aaron waits overnight, Tate makes a miraculous recovery. Afterwards, Tate has newfound strength, is able to physically overpower his bullies and no longer wants to eat food. Two men then break into the house and attempt to kill Tate before Tate kills one of them. The surviving man explains that Tate has become a vampire due, it is believed, to the blood transfusion he received, and must be killed before he becomes fully undead. Refusing to accept this, Aaron goes on a quest to find a means of saving his son.

Aaron’s Blood was the third film for director Tommy Stovall who had previously made the non-genre Hate Crime (2005) and the quasi-fantastical Sedona (2011) about a mystical town. Stovall subsequently went on to make the horror film Room for Rent (2019) with Lin Shaye as a disturbed landlady. Aaron’s Blood did receive a small theatrical release but was seen more widely on cable and streaming platforms.

The vampire film is looking very anaemic these days. A large part of the problem is that it is hard to take it seriously when Twilight (2008) and sequels turned the vampire into a figure of ridicule. There have been a few sporadic attempts here and there but nothing that gave the genre a fearsome shot in the arm the same way that Hammer Films and Christopher Lee invigorated it back with Dracula/The Horror of Dracula (1958). (For an overview of the genre see Vampire Films).

Aaron’s Blood works rather effectively as a story of one father trying to do everything he can to protect his son. Even though the film lets us know from the outset that it is a vampire infection that Trevor Stovall (director-writer Tommy Stovall’s own adopted son) is suffering from, it becomes fascinating watching him start to exhibit symptoms – going from a weak haemophiliac to exhibiting super-strength, potting 36 basketball hoops in a row and catching a ball thrown at him by the bullies from behind his back, or getting a bad sunburn simply in the time it takes to walk between class. The story and its progressive arc – the father discovering the son is infected, going on a crusade to find a way to reverse the infection – is strong and well told.

What often gets in the way of a solid start is the need for Tommy Stovall to keep throwing in dream sequence jumps – including James Martinez waking up from beside the hospital bed to find Tate gone and the hospital staff having no record of him and later sequences finding that Tate is gone from the house and that Aaron’s sister (Farah White) has been killed by him. Dream sequences in horror movies are almost always a faux way of getting jumps when none of them organically rise out of the script, which feels especially the case here when we get three such sequences.

The introduction of the vampire hunters also stretches believabiility – one of them is working as a janitor and just happens by as Trevor Stovall is fighting back against a bully. Not to mention this comes without much in the way of explanation of who they are ie. if vampires are so prevalent the hunters need to organise that suggests there is a vast underground society of them lurking somewhere.