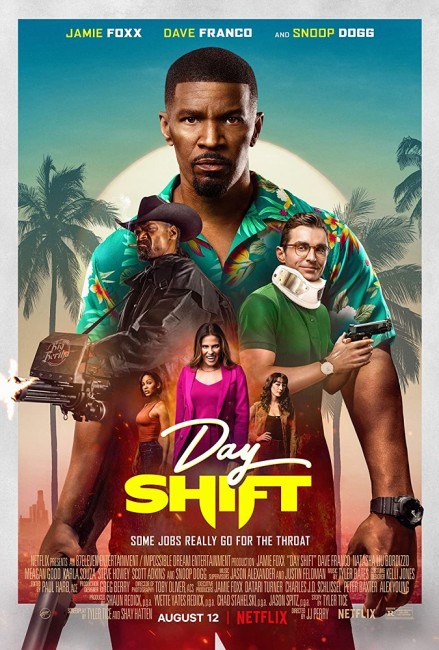 Bud Jablonski runs a pool cleaning service in the San Fernando Valley, although this is just a cover for his work as a vampire hunter. Bud then learns that his ex-wife Jocelyn is planning to sell up and move to Florida with their daughter Paige. Bud begs them not to go and agrees to raise several thousand dollars by Monday to pay for Paige’s tuition and braces. To get the higher prices for the bounty on the teeth of the vampires he has killed, Bud is forced to return to the vampire hunters union, which he had previously quit after being charged with too many infractions of their regulations. Administrator Ralph Seeger reluctantly agrees to take Bud back on but insists on pairing him with regulation quoting union rep Seth who has never been out in the field before. As the two set out, Bud finds that he is now being hunted by the vampire relator Audrey San Fernando, who is determined to take revenge against Bud and his family for killing her daughter.

The vampire hunter has been with us almost as long as vampire fiction has been. Two of the earliest, most formative works of vampire fiction – J. Sheridan Le Fanu’s Carmilla (1872) and Bram Stoker’s Dracula (1897) – introduced vampire hunters along with their respective vampires. The vampire hunter gained strength on screen with Hammer’s Dracula/The Horror of Dracula (1958) played by Peter Cushing, who became the hero in Hammer’s second Dracula film The Brides of Dracula (1960) in the absence of Christopher Lee.

There have been assorted Van Helsing standalone films, while the vampire hunter gained a popularity on screen in the 1990s with the various adventures of tv’s Buffy the Vampire Slayer (1997-2003), Blade (1998) and sequels, the tv mini-series Ultraviolet (1998) and John Carpenter’s Vampires (1998). The vampire hunter parody began with The Fearless Vampire Killers (1967) and has extended through assorted comedy efforts including Stan Helsing (2009), Jesus Christ, Vampire Hunter (2001), Hawk & Rev: Vampire Slayers (2020) and Super Hot (2021). (For a more detailed listing see Monster Hunters).

Day Shift is a directorial debut for J.J. Perry who has a long history as a stuntman, stunt coordinator and second unit director on numerous high-profile films going back to the 1980s including, as the trailer prominently mentions, the John Wick films, along with various entries in The Fast and the Furious series and a whole heap of others. The script was a debut for the unknown Tyler Tice but given a rewrite by Shay Hattem who also wrote Zack Snyder’s Army of the Dead (2021).

Day Shift immediately catches your attention with a wildly charged action scene only a few minutes into the film. Jamie Foxx enters a house and is attacked by an old lady vampire and is immediately engaged in a frenetic fight with her with either of them throwing the other against the wall and across the room, with the old lady demonstrating the ability to unnaturally twist her body, at the same time as Jamie is blasting at her with a shotgun and attempting to impale her with a shard of wood. It is a full tilt scene that leaves you feeling like you have been through a physical workout – and that is only the opening moments, which presages well for things to come.

The film then segues into a becoming a variant on the Buddy Cop Film, a genre that began with Lethal Weapon (1987) and has seen many variants since, centred around the comic possibilities of two cops with diametrically opposed personalities partnered together. Jamie Foxx is the phlegmatic, rule-breaking veteran who goes through the whole film without even cracking a smile, while Dave Franco plays the comically uptight bureaucrat who can quote every regulation and is a complete novice as he is thrown into the deep end on his first field assignment. Both actors bounce off one another with assurance and their rapport proves the backbone of the film, before Franco undergoes a left field change later in the film.

What also aids the film considerably is an excellent script. It does a great job nailing down every aspect from the characters and Jamie’s motivation and back history. Beyond that, the film spends quite a bit of time engaged in its world-building about the different types of vampire, explaining zombies away as partially turned vampires, as well as detailing how the bureaucracy of the vampire hunter services work.

The other thing that makes the film work is J.J. Perry being allowed to do what he does best – namely set up stunts and direct action set pieces. Aside from the opening scene, there is an exhilarating sequence in mid-film where Jamie Foxx, two rival brother vampire hunters and a bumbling Dave Franco enter a house that is a nest of vampires with mad sequences with them wrestling, shooting, throwing one another through walls, staking, stabbing, beheading, wielding boot knives, staking multiple vampires at once or shooting at them as they leap through the air. On the other hand, a subsequent vehicular chase sequence never quite hits the same heights.

Between the action sequences, the strength of the script and the central performances, Day Shift comes together as some of the most action-driven fun I can recall sitting through in some time. Not to mention the film gives Snoop Dogg one of his most badass acting roles ever – the scene where he turns up wielding a massive chain gun to wipe out an abandoned apartment store of vampires has you cheering.