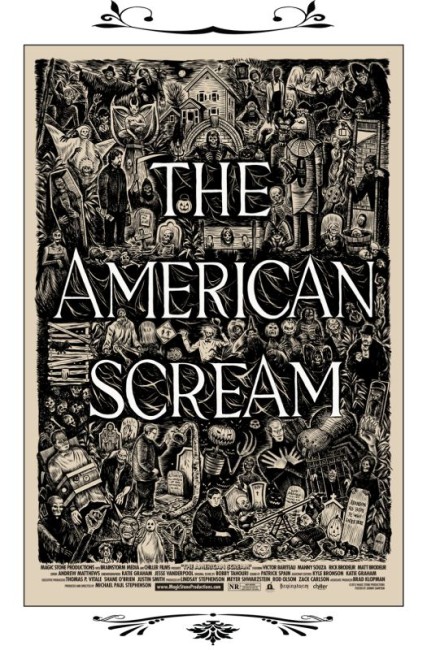 Michael Paul Stephenson is most famous as the kid from Troll 2 (1990). Beyond a handful of unmemorable roles in tv, Stephenson never went onto a career as an actor. A decade later however, Stephenson suddenly found himself at the centre of a cult as Troll 2 was revived as a bad movie classic and he toured the USA appearing at screenings. Fascinated by the phenomenon that had grown up around the film, Stephenson set out to chart it in a documentary with Best Worst Movie (2009), which in itself gained a cult following. After Best Worst Movie, Stephenson was approached by the US Chiller cable channel to make a documentary about the phenomenon of home hauntings – people who transform their homes into haunted houses for the Halloween season.

According to Michael Paul Stephenson, who spoke by Skype link when The American Scream screened at Vancouver’s 2012 Rio Grind film festival, they set out to solicit interest from various home haunters and received numerous submissions. They went to visit Victor Bariterau in Fairhaven, Massachusetts. Deciding that Bariteau was the perfect subject, they set about filming him as he prepared for the 2011 Halloween season. They then learned of Matthew Brodeur who creates his own haunted house with his father Richard, and former Baiteau associate Manny Souza who does the same with his family home, all of whom were located within a few blocks of each other, and added them to the documentary.

The film follows the three households as they prepare for the Halloween season. We see the work that goes into building the effects, from fake graveyard sets, killer plants built out of recyclables and the costuming to Victor Bariteau’s obsession with constructing an Egyptian styled set with a giant pop-out snake. The film has no huge revelations or dramas going on, it is just a portrait of the various individuals. At most, we see their stress (in particular Victor Bariteau’s obsessiveness) to complete the work as the Halloween date nears. What comes through is how each home haunt becomes a work of art that each haunter fixates on getting right according to their vision.

The one thing that Michael Paul Stephenson does surprisingly little of is delve down into each of the haunters motives for creating their home haunts. He briefly delves into the personal toll that the obsession takes on Bariteau’s family with his wife explaining how they had to move into a less than desirable house because he considered it a far better venue for running a haunted house, while we also see how his children are packed into a small room that is also crammed with Halloween costumes.

At most, Victor Bariteau’s wife tells how he was raised in a church that forbade the celebration of Halloween (or any other holidays) and how this has this had led to his obsessively trying to work out what he missed in his childhood. The most fascinating fact that the film never dwells on is when we learn that Bariteau’s mother was a member of the Branch Davidians. In one very brief clip, his mother is interviewed and tells how she left the church after the leader attempted to resurrect a body from the dead. This was an incident famously attributed to David Koresh, none other than the cult leader who died during the infamous siege at Waco in 1993, which makes for a rather fascinating point of connection.

The American Scream is a likeable documentary. We follow the various households portrayed as Halloween nears. The disappointment of the film might be the coverage of the Halloween night itself. We do get to see some of this but it is quickly edited and all of the haunts are blended together so that we are not sure some of the time which set-up belong to which household. What would have been nice would have been if Stephenson had taken us through each of the scenarios individually and spent a little more time so that we could see what each haunter was working to achieve. After all, the entire film is all about the build up to the unveiling of this.

The other thing that might be said is that The American Scream is a much more low key documentary than Best Worst Movie was. There is not the same freakshow appeal there was to the characters in Best Worst Movie – everybody here falls well within the parameters of what most people would consider normalcy. Nor does the film have the assuredly charismatic character of George Hardy at the centre of the film. Victor Bariteau becomes the centre of the show by default but is altogether a quieter and more introverted presence than Hardy was.