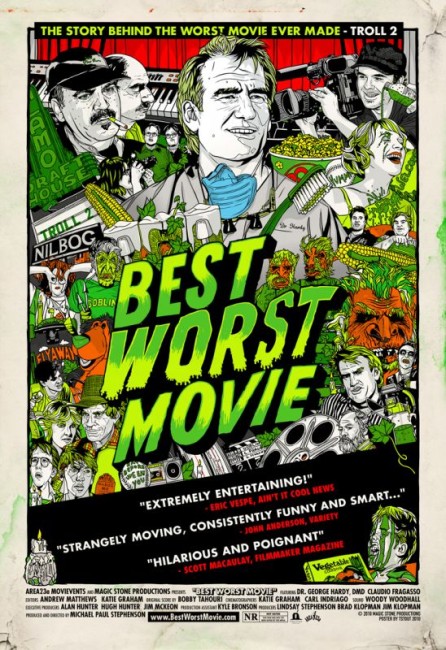 Best Worst Movie is a documentary about Troll 2 (1990) and the fandom that surrounds it. Originally Troll 2 was no more than a low-budget direct-to-video release but in recent years has become regarded as a strong contender for the Worst Movie of All Time.

Best Worst Movie was made by Michael Paul Stephenson, who as a ten year-old played the obnoxious redhead kid who is the hero of Troll 2 – he has the infamous scene where he stands and pisses on the dinner table. Stephenson became aware of the cult that was growing around Troll 2 as he and members of the original cast were called up to make appearances at sell-out revival screenings. In 2006, Stephenson set out to make this documentary and chart the unique cult fame that Troll 2 has found – one that extended as far away as being screened by the US forces stationed in Iraq.

Michael Paul Stephenson has made a concerted effort to bring together and interview all those who were involved in Troll 2 – even the dwarf extras behind the goblin masks. (The only person from the original cast who is absent is Deborah Reed who gave an astoundingly awful performance as the witch Creedence). All were amateur actors who had been hired in and around the town of Porterville, Utah. Every single one of the actors has failed to go onto any kind of notable acting career elsewhere, at most a handful of minor bit supporting parts.

When finally relocated, some of the cast members prove to be as bizarre in real life as anything that goes on on screen in Troll 2. There’s Don Packard who played the creepy general store owner who tells how he had been in a psychiatric institution at the time the film was made where his psychiatrist suggested that he audition as part of his therapy. He claims to have been stoned right throughout filming and unable to remember much, and elsewhere talks about how he would vote for his fluffy toys as President.

Stephenson and George W. Hardy track down Margo Prey who played the spaced-out mother and appears even more bugged out in real life. At one point, she claims that Troll 2 is a good old-fashioned film that can be compared to a classic Bogart-Hepburn romance. Stephenson and Hardy press her to come to one of the screenings and then ask why not. The look they give each other when she says she cannot because of the noise that her neighbours keep making and then opens her mouth to scream as demonstration says it all.

The most intriguingly ambiguous character in Best Worst Movie is Troll 2‘s director Claudio Fragasso. When initially interviewed, Fragasso shrugs of all criticism of Troll 2, although is later seen trolling the crowds lined up outside a screening asking them what they think of the film. One minute he seems to be proud of the worst movie label and then the next to regard any criticism of him or the film as misjudged and responds by turning on the person voicing such with a blistering attack. Case in point being a Q&A session at one of the screenings when someone asks why there are no actual trolls in Troll 2 and he responds with a rudely dismissive “You don’t understand.” He also has a disconcerting habit of referring to actors as “dogs” throughout. At one point, Fragasso offers up a bizarre explanation of Troll 2 as being a parable about the family at siege from allegorical outside threats. Fragasso’s wife Rossella Drudi, the screenwriter of Troll 2, offers up an hilarious explanation of how she wrote the film as a reaction against the number of friends around her who were turning vegetarian.

The undeniable star of the show is George W. Hardy, who played the father in the original and now maintains a successful dental practice in Alexander City, Alabama. Hardy has a warm, friendly and naturally gregarious presence. As a number of people lined up at the start say, there doesn’t seem to be anybody in the world who doesn’t like him. George W. Hardy becomes the de facto hero of the show as we follow him across the USA to attend the various revival screenings of Troll 2.

Hardy seems to be totally in his element when on stage, signing autographs and getting to re-enact his infamous line “You can’t piss on hospitality.” Hardy is questioned at the end of the film and seems to express a genuine regret that he felt obliged to follow a career in dentistry rather than take up acting. When asked if he would sign up for a Troll 3, he answers yes without the slightest hesitation. Judging by the exuberance of his personality on screen, you seem sure that Hardy has what it would have taken to make it as an actor – you could easily see him inhabiting the same niche as B movie actors like Wings Hauser or Charles Napier. (The success of Best Worst Movie subsequently saw Hardy being employed in a number of B movie roles).

The most interesting parts of Best Worst Movie are when we see George W. Hardy, who seems to be the driving force behind Troll 2 fandom, trying to expand interest in the film beyond its cult niche. In one scene, Hardy travels to England to attend a memorabilia convention and sets up stall trying to sell Troll 2 autographs, dvds and T-shirts (without managing to offload a single one). There is an hilarious scene where he arranges a charity screening of the film in his hometown, which is attended by Hardy’s regular dental patients and other locals, rather than those who come to watch it appreciating it as a bad movie – afterwards we see elderly folk exiting the screening politely saying “Nice film … Very good” while clearly not getting it at all.

There is also a visit to a horror convention where Hardy doesn’t seem to get the people dressed up in costumes and starts making putdowns about how few of the attendees appear to floss their teeth. During this, while talking about actors from the A Nightmare on Elm Street sequels and expressing amazement that they seem stuck in the past and haven’t gone onto anything else, Hardy reaches an epiphany in suddenly realising that exactly the same applies to him. If there is anything that can be considered character development in a documentary, that is surely it. You can only applaud a film that charts the fascinated microcosm of a fandom and then comes to the sudden realisation of how little it matters to anybody not in on the joke.