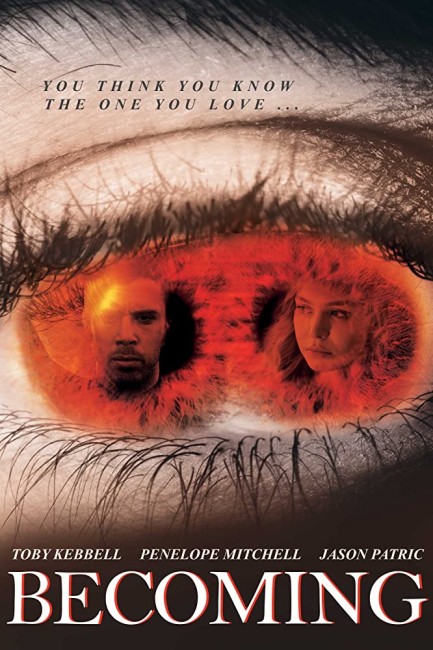 Alex Ferry and Lisa Corrigan have just become engaged and are travelling across country to meet her parents. They stop off to visit Alex’s only living relative, his uncle Glenn Hemming. Lisa finds Glenn off-putting and insists they leave first thing in the morning. While they are there, Glenn’s wife Annie sneaks Lisa a note telling her to find a Kevin Lee in Iowa. After they depart, Lisa finds that Alex is acting strangely. His behaviour becomes noticeably different before Alex collapses and is taken into hospital. Lisa seeks out Kevin Lee, a crazy living in a caravan. He tells her that Alex has been taken over by an entity hundreds of years old that passes between bodies, inhabiting them and then killing off the original. Lisa thinks this is crazy but as she returns to Alex, the entity becomes even more extreme in its determination to survive.

Becoming – not to be confused with the Michelle Obama documentary Becoming (2020) that came out around the same time – is the fifth film from Omar Naim, an expatriate Jordanian whose first appeared with the documentary Grand Theater: A Tale of Beirut (1999). What caught my attention was Naim’s first work of fiction The Final Cut (2004), a smart and intelligent science-fiction film starring Robin Williams as a man who edits memories for a living, which never quite received the due it should have. Since then Omar Naïm has made the supernatural film Dead Awake (2010) and co-directed the documentary Stand Up: Muslim-American Comics Come of Age (2009), before returning to genre material with Becoming.

Possession films have been with us ever since the silent era and The Hands of Orlac (1924). For the last forty years the topic has become dominated by The Exorcist (1973). There has also been the theme of the body-hopping entity has been conducted a number of times, most notably with The Hidden (1987). The last couple of years have seen an exceptional series of treatments of the theme of possession and body hopping with works such as Every Day (2018), Lifechanger (2018) and Possessor (2020).

Becoming is often a film that feels that it has been conceived in terms of a series of disorienting twists and turns designed to jerk us around the moment we think we know what is going on. The film opens on a scene with Toby Kebbell being held a prisoner by Lew Temple, before Temple is distracted by the appearance of his kid (Alexander Essex) pulling a gun, he demands the gun from him and then turns and shoots the kid with it. In the next scene, Toby Kebbell is on his cross-country journey with Penelope Mitchell and it seems the happy trip of two people in love. This becomes a bewildering disconnect as we have no idea whether the scene we just saw with Toby a prisoner was meant to be a flashback from something that will happen later or is something that occurred in the past.

Then comes the visit to Toby’s uncle where Jeff Daniel Phillips gives a gregarious performance that becomes threateningly over-friendly. Amidst this, there is the scene where wife Melissa Bolona fearfully approaches Penelope Mitchell with a note that tells her to “Find Kevin Lee in Iowa” and then quickly swallows the note as she hears someone coming. Penelope Mitchell decides she wants to leave first thing in the morning but even when they do there are suggestions that something is very wrong – Jeff Daniel Phillips cutting his wrists in the bathroom at the same time as Toby Kebbell wakes up, his eyes changing as he does. In the subsequent scenes, we see Toby Kebbell in a restaurant as he switches to his other hand to sign the cheque, while above on the restaurant’s tv there is a jolt as a news item tells us that Jeff Daniel Phillips and family have just died in a murder-suicide.

Similar such scenes continue right throughout. Like the completely bewildering scene where the possessed Toby Kebbell goes out for a drive and then finds another man (Dan Southworth) trying to get into his truck insisting it is his and that he is the real Alex Ferry, being able to state details about the truck that only the owner would know. In another scene, Penelope Mitchell wanders into a junkyard and is pursued by a man who calls out with Toby Kebbell’s voice, even using Toby’s familiar nickname for her.

This is a film where you have no idea where it is going at all. On the other hand, you do realise afterwards that some of these twists make no sense at all. [PLOT SPOILERS]. It is confusing, for instance, trying to work out where in the timeline the opening scene with Toby Kebbell being held prisoner is meant to take place. According to the progression of events, the entity transfers into Toby from the uncle not Elias Lee. Toby’s character has no knowledge of the entity prior to meeting the uncle and gives no indication he ever met Elias Lee, let alone was held prisoner by him. In other words, it is an event that could not possibly have happened according to the film’s timeline. Furthermore, if the entity passes from body to body killing the host, then who is other man who insists the truck is his and how did he and Toby end up with the same identity and vehicle? Or for that matter who is the man that pursues Penelope Mitchell through the junkyard but speaks with Toby Kebbell’s voice.

Normally these inconsistencies and plot holes prove a major irritation to me in watching a film. In this case, the constant profusion of twists and turns proved sufficiently engaging that they didn’t. I enjoyed following a film where I genuinely did not know where things were going from one moment to the next. Toby Kebbell (who also produces) establishes himself as a fine performer – his ability to snap between personalities comes with undeniable effect.