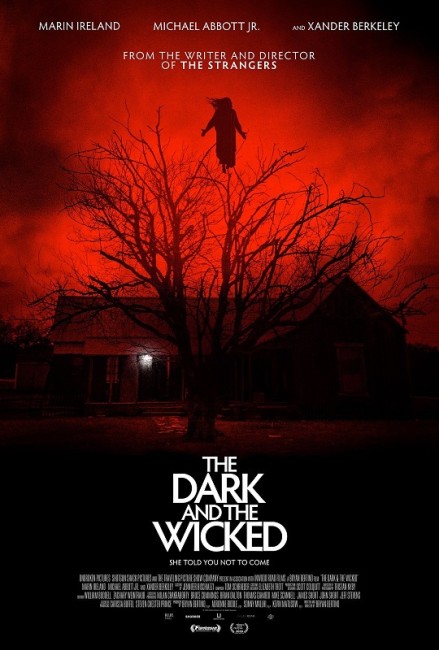 Brother and sister Michael and Louise Straker have returned to the family farm in rural Texas to be beside their ailing father in his last days. Their mother is slicing vegetables and cuts her own fingers up. In the morning, Michael and Louise find she has hung herself in the barn. As they wait with their father, they are subject to a series of frightening apparitions and visitors. Gradually, they realise that an evil is waiting for their father to weaken so that it can claim his soul.

The Dark and the Wicked is the fourth film from Bryan Bertino. Bertino first appeared with the impressive home invasion film The Strangers (2008), which gained a strong reputation when it first came out. He followed this with the Found Footage film Mockingbird (2014) and the impressive roadside monster film The Monster (2016). He has also produced The Blackcoat’s Daughter/February (2015), Stephanie (2017), Hurt (2018) and The Strangers: Prey at Night (2018).

I regard Bryan Bertino as a highly talented genre director and always anticipate the far too few films he has made. So it is with great anticipation that I sat down to watch The Dark and the Wicked. The film starts slow. For the first few fifteen minutes, the film could be an ordinary rural family drama. The pace throughout is much slower than usual – indeed, you think you are in the midst of one of Osgood Perkins’ horror films – The Blackcoat’s Daughter, I Am the Pretty Thing That Lives in the House (2016).

As you absorb into it, Bertino fires off a number of shocks. The first of these comes as the mother Julie Oliver-Touchstone is slicing vegetables in the kitchen and there comes a sickening crunch and we see she has sliced the ends of her fingers off. What makes the scene even more horrible is that that she keeps on going and dices the rest of her fingers up as well.

Things more increasingly more uncanny – sinister shadows in the barn; mysterious phone calls; the jolt appearance of the bedridden father while Marin Ireland is in the shower; mutilated cattle; the sinister appearance of a young girl at the door. One of the more unsettling effects is Xander Berkeley as a priest who turns up and offers harsh damnation and possibly is even a manifestation of the evil. This is a film about lurking dread. The nature of what is waiting to claim the old man is never specified – a demon? The Devil itself as it is called at one point? – even as its manifestations become increasingly more malevolent.

There are times the slow burn nature of the film slows right down. And there is the odd effect like the old man pinned to the ceiling that seems a standard shock that feels overused. On the other hand, Bertino gets a great shock off where [PLOT SPOILERS] Michael Abbott Jr returns home to his family to find all of them dead and in grief slits his throat with his penknife – only for them to walk in the door perfectly alive.

(Nominee for Best Director (Bryan Bertino) at this site’s Best of 2020 Awards).