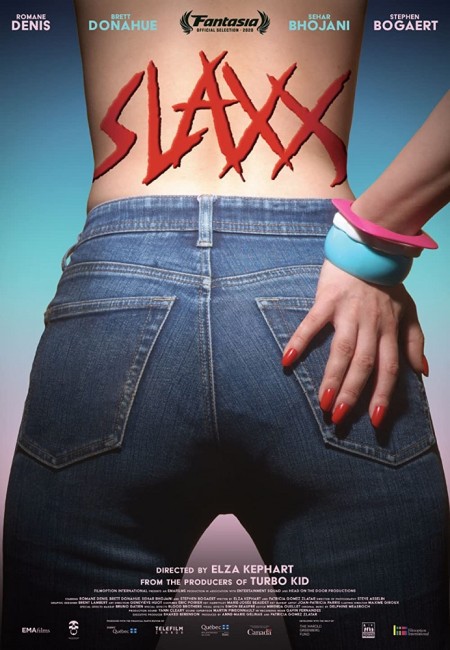 Libby McClean is about to start her first shift at the Canadian Cotton Clothiers franchise store that sells what is advertised as fair trade, diverse-friendly and non-sweatshop produced clothing. She is asked to work the night shift where the entire store is placed into lockdown as the staff set up for Monday Madness where the new Super Shapers jeans will be premiered. The social media influencer Peyton Jewels will be let in during this time to film a special. As the staff set to work, Jemma sneaks off to try on a pair of Super Shapers only for them to come to life and crush her legs. When Libby finds the body, the manager Craig orders her to keep quiet about it until opening. However, the jeans have a life of their own and begin to devour the staff.

Since the 1990s, the Possession Film has gone in all manner of strange directions offering up the likes of possessed likes of The Refrigerator (1991), Killer Tongue (1996), a possessed laundry press in The Mangler (1995), a possessed gingerbread man in The Gingerdead Man (2006) and even possessed furniture in Killer Sofa (2019). There has been a very small handful of films about possessed clothing with cursed dresses appearing in I’m Dangerous Tonight (1990) and In Fabric (2008), while The Cloak episode of The House That Dripped Blood (1970) featured a cape that turned Jon Pertwee into a vampire

Slaxx is a Canadian-made film from Quebec (French-speaking Canada – although the film itself takes place in English). It was the third film for director Elza Kephart who had previously made the zombie film Graveyard Alive (2003) and the strange Go in the Wilderness (2013).

This is a film clearly made by someone who has worked retail in one of Canada’s franchise outlet stores. The country has them by the bucketload and I know people that have worked there. The film has an unnervingly on the ball glimpse of the corporate structure – the way it pays lip service to diversity and the environment while regarding employees as barely more than used toilet paper, the petty rivalries for seniority, the ridiculously contorted rules designed to cheat the customer. This the film gets with a bitingly accurate satiric eye and it is all the wittier for doing so. In addition, the film digs its claws into the culture of ‘YouTube Influencers’ with great delight.

The most entertaining scenes are the ones with the killer jeans where we see them crushing wearers and then devouring their way up bodies, even attacking an entire room full of people. We even get scenes with the jeans drinking up the spilt blood and see the ravening maw of a mouth on the inside. This becomes particularly clever when we see the jeans dancing and then adopting a mannequin body to create human semblance – the end credits play alongside some digitally unaltered clips of the actor in a green suit who performs the actions of the jeans.

The latter sections turn to something very different to the rest of the film where the jeans start communicating with the survivors and writing messages in Hindi in blood on the walls. Here we go from a novelty Monster Movie to learning about a slave labour worker in India who fell into the cotton picker and whose blood permeates the jeans. Now the story moves from a monster movie to more of a Supernatural Retribution one, albeit one that comes with a parable to make about the workers in Third World sweatshops emerging to literally devour the First World consumer society. This is a point the film makes with an undeniably potent bite.